Founder of the Barelwi sect, Mulla Ahmad Reza Khan (1856-1921) was a bitter opponent of the so called “Wahhabis”. He wrote countless books and issued various Fatawa declaring Wahhabis and Deobandis as misguided. He also issued a fatwa and wrote books against Hadrat Mirza sahib of Qadiyan.

Today, majority of the Muslims of the Indian subcontinent (India, Pakistan and Bangladesh) are followers of this Mulla and his polytheistic sect known as “Barelwis”.

They have many unscientific and illogical, indeed absurd doctrines. For example, they believe that the Prophet (Sallallahu ‘alayhi wasallam) is Noor-e-Mujassim (physically made from Light), that the Prophet is Haadhir wa Naadhir (omnipresent and witnessing all things), that he is Mukhtaar-i-Kull (omnipotent), that he is Aalim-ul-Ghaib (knower of the unseen), and that he and the other Awliya have the power to help the living and answer their petitions from beyond the grave.

But the blind Mulla Ahmad Reza was so unapologetic about rejecting the discoveries of modern science and intent on clinging to obscure medieval doctrines that he even went out of his way to refute the well known scientific fact that the Earth is in motion and orbits the sun (!!!).

For this objective, he wrote several books, the most famous being his Fawz-e-Mobeen Dar Radd-e-Harkat-e-Zameen (A Manifest Success in Repudiating the Idea of the Motion of the Earth). The other books include Nuzool-e-Ayaat e Furqaan bi Sukoon-e-Zameen o Asmaan and Mo’een-e-Mobeen Behr Daur-e-Shams o Sukoon-e-Zameen.

Modern-day Barelwis, when confronted with the undeniable scientific evidence which clearly establishes the fact that the Earth is in motion and not stationary, and that it orbits around the sun, are left dumbfounded and unable to reply. Some are even forced to admit that their so called Imam Ala Hazrat (Ahmad Reza) made an error in denying this fact.

However, the implications of admitting such a massive blunder are grave. First of all, Ahmad Reza has not written one but several books where he desperately tries to refute the idea that the Earth is an object in motion. He declares that such a belief will rob the Muslims of their faith and religion. He even quotes Verses of the Holy Qur’an as his evidence against this now accepted scientific fact. Therefore, Barelwis have no option but to admit that Ahmad Reza Khan is not worthy of being considered an Islamic scholar, let alone praising him with such lofty titles as “Ala Hazrat”, “Mujaddid”, and “Imam Ahle Sunnat”, etc.

That is because Mulla Ahmad Reza has implicitly declared as unfaithful anyone who rejects his doctrine that the Earth is stationary by bringing verses of the Holy Qur’an (according to his interpretation) as evidence.

Translation: “Ahmad Reza Barelwi [referring to himself in the third person] was inspired in his heart by the Angel of Ilhaam (Inspiration) that, with the permission of Allah Most High, to write a Risalah (Article) falsifying the claim of those who say the Earth is in motion and that the Sun is static (Stationary).” 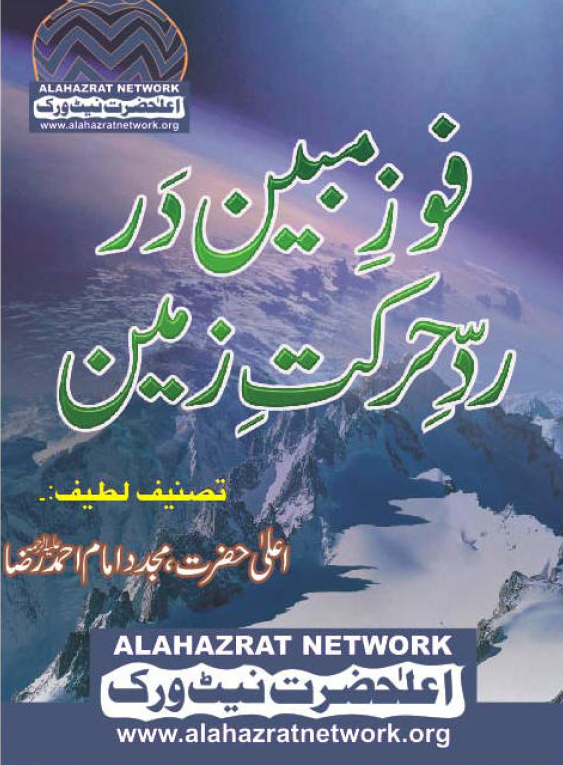 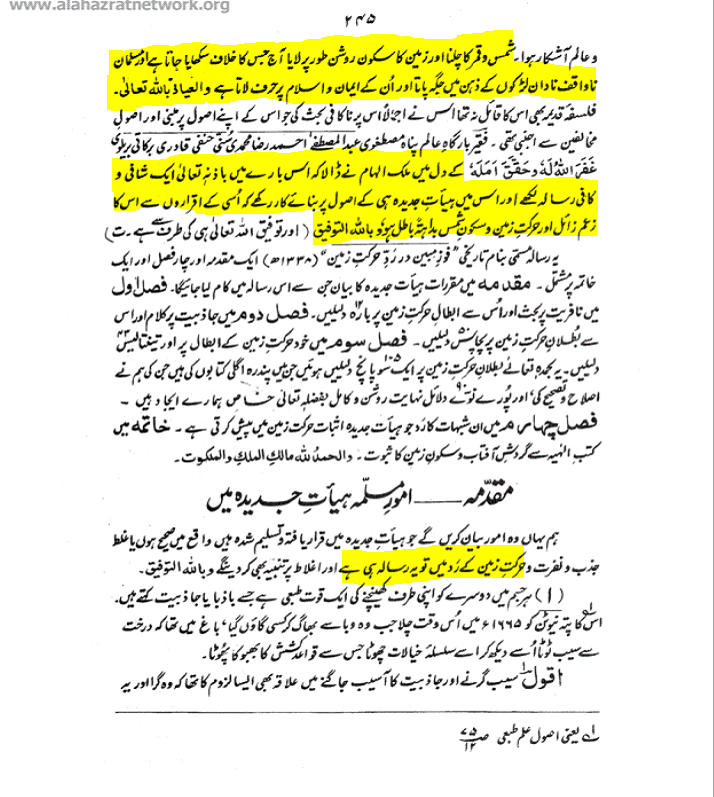 The dilemma for Barelwis is quite evident now. Their “Imam” and “Ala Hazrat” has not only put forward the argument that the Earth is stationary as his personal opinon which has the possibility of being correct or incorrect. Rather, Mulla Ahmad Reza claims that he was inspired by an Angel through Ilhaam (divine inspiration) to write the book refuting those who claim the Earth is in motion.

Finally, some extreme Barelwis, who are fanatical blind-followers of the Mulla, argue that essentially scientific discoveries and observations may be flawed, but the verdict of the Holy Qur’an, being the Word of Allah, is perfect and true, and since Mulla Ahmad Reza has quoted verses from the Holy Qur’an to prove that the Earth is stationary, therefore, Muslims are obliged to accept the Word of God and reject modern scientific discoveries and observations.

Mulla Ahmad Reza has only brought his own personal interpretation of the Holy Qur’an and at best quoted some medieval scholars. He has not explicitly proven from the Holy Qur’an that the Earth is motionless.

In fact, for the interested reader, I refer him or her to the following insightful article which gives an alternative interpretation, with quite strong argument I may add, that the Holy Qur’an actually implies that the Earth is in motion:

Translation: The sun does not reach the moon, nor does the night overtake the day, but each is floating in orbit. (Surah 36:40)

Now it is a scientific fact that all bodies in the universe are in motion and an orbit. Even the sun is not stationary. It is rotating around the heavy cluster of stars at the center of our Milky Way Galaxy.

The Holy Qur’an in this blessed Verse does not claim that simply the sun and moon are floating (or swimming) in an orbit, but even the night and day are included in the indefinite noun كُلٌّ.

By stating that the Night and Day are included in a continuous orbit (Rotation) the Holy Qur’an has implicitly affirmed that the Earth too is in motion, because the rotation of the Night and Day (which are already understood as not being solid objects but modes/states that relate to the Earth). The motion proven here is that the Earth spins on its axis, which is the reason for the continuous rotation of night and day.