Continuing from where I left off, I now come to a controversial debate with “Miqiyas al-Nur” (a rival Barelwi blog) over various Masaa’il of the Hanafi school of jurisprudence.
First I would like to clarify that our Movement respects all of the four schools of thought (Hanafi, Maliki, Shafi’i, and Hambali) and we have nothing but love and respect for the four great Imams of Fiqh, Abu Hanifah, Muhammad b. Idris al-Shafi’i, Malik b. Anas, and Imam Ahmad b. Hambal (may Allah have mercy on all of them).
However, as none of them, or any other imam, mujtahid or scholar, was infallible or free from error, therefore, we do not believe in blindly following any Islamic scholar or school of thought. However, we do generally follow the Hanafi school of thought as it is the most superior of the four schools and the one which has been accepted within the Ummah from generation to generation in great numbers.
That being said, we oppose the concept of Taqleed and reject Wujoob at-Taqleed (blind-following) essentially because there is no command in the Islamic Shari’ah (Qur’an and Sunnah) that Taqleed is binding upon the Muslims. Neither is there any statement from Imam Abu Hanifah (rahimahullah) that Taqleed is binding on his students and disciples, rather, there are statements from him contrary to that.
(1)After this important clarification, let us then proceed to analyze the response of Miqiyas al-Nur here:
http://miqyasalnur.blogspot.ca/2016/08/refuting-accusations-on-fiqh-al-hanafi.html
The issue of the Hillat vs Hurmat of the Ghuraab (crow).
According to the Islamic Shari’ah, without going into the details of the evidences, it is well known that the bird known as Ghuraab (Crow) is Haraam and Najis. The crow is not a bird of prey, possessing neither claws nor talons. However, its Hurmah and Najaasah is due to it feeding on filth, so it is in the category of al-Jallaalah. The Prophet (Sallallahu ‘alayhi wasallam) has forbidden eating the meat of al-Jallaalah generally, and the Ghuraab (Crow) specifically:
عَنْ ابْنِ عُمَرَ ، قَالَ : " مَنْ يَأْكُلُ الْغُرَابَ ، وَقَدْ سَمَّاهُ رَسُولُ اللَّهِ صَلَّى اللَّهُ عَلَيْهِ وَسَلَّمَ فَاسِقًا ، وَاللَّهِ مَا هُوَ مِنَ الطَّيِّبَاتِ "
Translation: “Ibn Umar (Allah be pleased with him) said: “Who eats the crow when the Messenger of Allah Sallallahu ‘alayhi wasallam has named it as Faasiq (Evil). I swear by Allah, it (crow) is not from among the pure things.” [Sunan of Ibn Majah]
Hence, even if any school of thought or Mujtahid, Imam, etc., proclaims a Fatwa to the effect that eating crow is permissible, it must be categorically rejected since the verdict of our beloved Prophet (Sallallahu ‘alayhi wasallam) has already reached us via this authentic Hadith. One should not disobey the Prophet (Sallallahu alaihi wasallam) with the excuse of Taqleed.
Yet in clear contravention of this, it is mentioned in classical book of Hanafi jurisprudence:

Miqiyas al-Nur failed to respond to this Ibaarah . Instead, he only mentioned that the Aq’aq is not the same as Crow, but he totally ignored the second quote where Abu Hanifah explicitly mentions it is allowed to eat the Ghuraab (Crow).
With regard to Bats, Miqiyas al-Nur says that its Hillah is based on a weak opinion within the Hanafi madhhab, because the phrase “in some places” is used. I am willing to give Miqiyas al-Nur the benefit of the doubt on this one, provided he substantiates his argument with proof that whenever the phrase بَعْضِ المَوَاضِعِ occurs in the texts of Hanafi jurisprudence it is always understood as meaning “weak opinion”.
When it comes to the owl, Miqiyas al-Nur frankly admits that the Owl is Halal in his madhhab and argues “As for the owls, why is this surprising considering that al-asl fi kull al-ashya`a ibaHa.” Meaning “The principle is that everything is Mubah (permissible)”.
However, since the Prophet (Sallallahu ‘alayhi wasallam) has forbidden birds of prey, it must only be ascertained whether the owl falls into the category of
وَعَنْ كُلِّ ذِي مِخْلَبٍ مِنَ الطَّيْرِ
For educational purposes, I am pasting two photographs to resolve the issue: 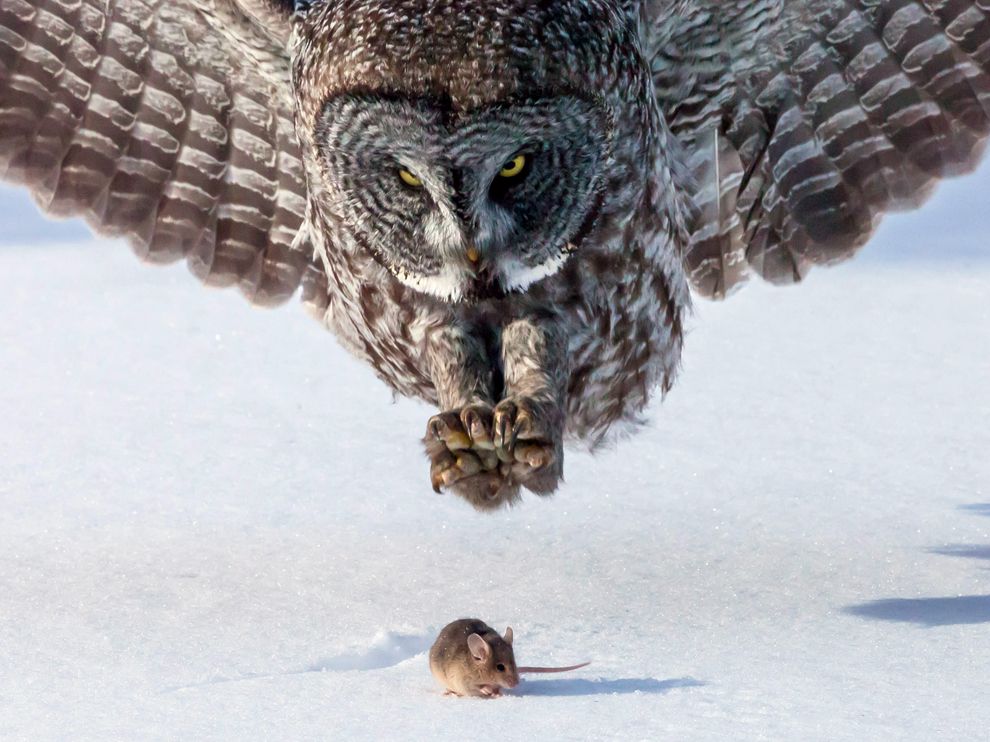 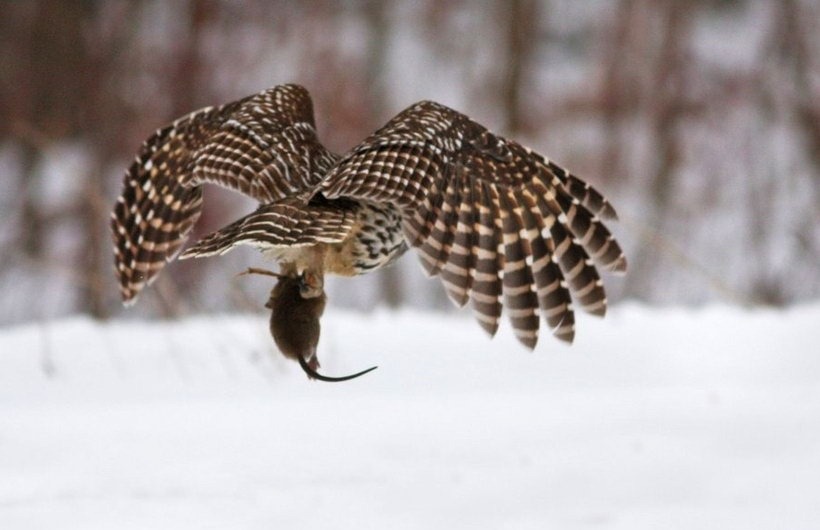 Finally, concerning the mule, which is called Al-Bighaal, it refers to the offspring of a horse and a donkey, and it makes no difference whether it is an offspring of a male horse and female donkey or male donkey and female horse. Miqiyas al-Nur says that the ruling depends on the mother, if it is a female horse, the Mule is Halal, but if the mother is a female donkey then the Mule is Haram. My challenge to him is where in the Shari’ah has such a principle been derived? How can this be an Ijtihaadi Mas’alah when the Nusoos clearly forbid eating the Bighl (Mule)?
Allah (Azza wa Jall) says:
وَالْخَيْلَ وَالْبِغَالَ وَالْحَمِيرَ لِتَرْكَبُوهَا وَزِينَةً وَيَخْلُقُ مَا لاَ تَعْلَمُونَ
“The Horse, and the Mule, and the Donkey which you ride upon as well as (being) adornment, and He creates (other things) of which you do not have knowledge.” (Surah 16:8)
In this Ayah, Allah has said that these three animals (Horses, Mules, and Donkeys) were made for riding as well as adornment. It is not mentioned that they were made for eating, unlike the Al-An’aam (Cattle) which were created for us to eat (Surah 16:5)
Furthermore, it is reported that the Prophet (Sallallahu ‘alayhi wasallam) said:
عَنْ خَالِدِ بْنِ الْوَلِيدِ ، أَنَّ رَسُولَ اللَّهِ صَلَّى اللَّهُ عَلَيْهِ وَسَلَّمَ : " نَهَى عَنْ أَكْلِ لُحُومِ الْخَيْلِ ، وَالْبِغَالِ ، وَالْحَمِيرِ ، وَكُلِّ ذِي نَابٍ مِنَ السِّبَاعِ "
Translation: Khalid b. al-Walid (Allah be pleased with him) narrates that the Prophet (Sallallahu ‘alayhi wasallam) prohibited eating the flesh of the horse, and the mule, and the donkey, and ever fanged predatory beast.
(2)Regarding the issue of disgusting beastiality, here is the full response of “Miqiyas al-Nur” to my blog:
http://miqyasalnur.blogspot.ca/2016/08/refuting-gibbo-on-shameful-misquoting.html
Miqiyas al-Nur argues that “Please note that the second part says bestiality if causing the production of fluids would require damm and simply the fact that it says la tufsid al hajj does not make it permitted in the Hanafi school nor does it mean there is no punishment.”

My Answer: This is a red herring, since no one is arguing or accusing that beastiality is permissible within the Hanafi school. The issue is concerning whether the act of beastiality invalidates Hajj. According to Hanafi jurisprudence, it will only invalidate Hajj if emission occurs, otherwise, mere penetration of an animal by a person who is doing Hajj will not invalidate his Hajj!
My objection is how can such a ruling be correct when even Hajj is such a sacred act of worship, even logically the act of penetrating an animal should definitely disqualify someone from fulfilling the conditions of Hajj. Remember Prophet (Sallallahu ‘alayhi wasallam) has defined intercourse as penetration when the two circumcised parts touch each other. Emission is not at all necessitated in this basic definition. Thus, when penetration occurs even without emission, Ghusl (ritual bath) is obligatory upon both male and female. Now based on what principle or evidence does the Hanafi school claim that penetration of the beast without emission cannot be considered as sexual intercourse and therefore cannot invalidate Hajj? I await reply from “Miqiyas al-Nur”.
(3)Basically there is the same issue with the Hanafi ruling on I’tikaaf, which is that if a person intoxicates at night it does not necessitate the nullification of his I’tikaaf. “Miqiyas al-Nur” once again diverts the basic issue by commenting: “Again, this does not mean it is permitted for one to do this during i`tikaf which is what the person quoting this is insinuating. It is clearly written it is against deen.”

My Answer: Another red herring! When did I claim that intoxication is permissible within the Hanafi madhhab? The issue is concerning nullification of I’tikaaf due to drunkenness. The purpose of I’tikaaf is to intensify one’s worship of Allah and come closer to Him. Intoxication undoubtedly must be considered as nullifying the act of worship of I’tikaaf, just as it nullifies Salaat. Based on which principle of evidence from the Qur’an and Sunnah does the Hanafi madhhab assert that drunkenness does not invalidate I’tikaaf? I await Miqiyas al-Nur’s reply.
(4)Regarding stepping on or placing one’s foot on the Holy Qur’an, Miqiyas al-Nur has made many serious errors in his response. First he says: “What was mentioned was if there is a musHaf and he accidentally steps on the musHaf - he is sinful”
This is very illogical and incorrect. It is a firm principle in Islam that no one is sinful due to forgetfulness or doing something unintentionally. Therefore, if anyone steps on the Holy Qur’an accidentally, meaning unintentionally, he cannot be held accountable nor is he “sinful” as Miqiyas al-Nur ignorantly claims.
The ibaarah from Fatawa Alamgiri actually says that it is an act of Kufr to step on a Mushaf of the Qur’an with the intention of showing disrespect. No doubt this is a correct ruling. However, the same ibaarah says that if one has any other intention apart from disrespect than it is not an act of Kufr.
The apparent implication of this Ibaarah is that it will not be considered as Kufr if someone steps on the Holy Qur’an with an intention other than disrespect, for example, if someone uses the Holy Qur’an as a support to extend his or her reach above, or if someone sits on a copy of the Qur’an intending to use it as a chair or stool, etc.
However, let us see what the most prominent Hanafi, Barelwi scholar living today, namely, Dr. Tahir-ul-Qadiri says:

Next is the scandalous issue of writing verses from the Holy Qur’an, such as Surah al-Fatihah, on one’s forehead or nose with blood or urine intending to be cured thereby (معاذ الله). Miqiyas al-Nur says: “AlaHazrat Imam Ahl al-Sunnat al-Shah Imam Ahmad Rida Khan alayhirrahma has declared this qawl as marjooh in his Fatawa Ridawiyya and has done ikhtilaf with it. Therefore, to bring this qawl as proof against the Ahnaf is incorrect.”
For sake of argument if Mr. “Ala Hazrat” has rejected this Qawl it only means that “Ala Hazrat” has become Ghair Muqallid. This is not a defense of the Hanafi madhhab or of Wujoob al-Taqleed which is the objective of Miqiyas al-Nur. We are very glad that “Ala Hazrat” has rejected this Mas’alah which is clearly written in the classical text of Hanafi Fiqh. But remember, “Ala Hazrat” is a modern-day Molvi from the 20th century, he is not in the category of classical Fuqahaa min al-Ahnaaf.
Also consider the fact that this is not simply an abstract issue. Hanafis until the present day have acted upon this Mas’alah of Hanafi madhhab. Saddam Hussein, the famous dictator of Iraq and butcher of Baghdad, was a follower of Hanafi madhhab like most Iraqi Sunni Arabs. It is well known that he had the entire Holy Qur’an written in his blood, which is, to the best of my knowledge, still on display for public viewing in a museum
https://en.wikipedia.org/wiki/Blood_Quran#Production_and_display