In the Name of Allah, the Entirely Merciful, the Especially Merciful

Continuing from my last entry regarding Iqbal’s Islam and Ahmadism, we now move on to another example of the author’s woeful ignorance. Iqbal says:

“The history of Muslim Theology shows that mutual accusation of heresy on minor points of difference has, far from working as a disruptive force, actually given an impetus to synthetic theological thought.” (pp. 18-19)

Keep in mind that Iqbal has made the above claim on the basis of history. The reason is because just a few lines after this claim, Iqbal will once again shift gears and claim that it is in fact the “synthetic spirit of Islam” which is the remedy to the sectarian mischief of the mullas.

We see that Iqbal is forced to emphasize his fantastic notion of Islam’s synthetic spirit because his earlier claim of the history of Muslim theology giving impetus to synthetic theological thought is simply untrue. On the contrary, the history of Muslim theology is a history of bitter divisiveness, sectarianism and even violence. In our previous entry we already mentioned the first inquisition in the history of Islam known as the Mihnah. But in fact, the theological disputes that arose throughout the early, middle, and modern history of Islam even managed to create political division within the Ummah, not to mention appalling bloodshed and violence. Many Muslim theologians were executed by the government of their day for heresy. Others suffered persecution, imprisonment, and exile. Apart from Islamic theologians, jurists, and imams, Sufi mystics have also suffered persecution. The mystic Mansur al-Hallaj was executed for heresy. While it is true that many of those executed or imprisoned by the rulers of the time were often implicated in political intrigue or revolt against the State, nevertheless, the State did invoke heresy as the prima facie for their persecution of various theologians, jurists and mystics. The historical Islamic governments and dynasties also executed on charge of heresy many individuals for making heretical claims of being prophets, angels, a reappearance of a prophet, or possessing some kind of divinity. In modern times this phenomenon continues. Take for example the execution of Sayyid Qutb in Egypt, Mahmud Taha in Sudan, just to name a few in an ocean of such examples of outright religious persecution of Islamic theologians, reformers, mystics and claimants to prophethood or divinity.

The Sunni – Shi’ite controversy is the elephant in the room. But if Iqbal or anyone else were to insist that the horrendous history of bloodshed, persecution and violence among the Muslims as a result of this particular controversy is essentially political and not theological, there are still a host of other examples of purely theological controversies that have acted as forces of disintegration for the Muslim Ummah. The sectarian riots in medieval Baghdad and Nishapur should not be forgotten. Various theological camps like the Hanbalis, Asharis, Mu’tazila, Karramiyya, Najjariyya, Mushabbiha, etc., arranged themselves into divided sections of urban centers. There was frequent rioting, with one sect engaging in mischief against the other, by setting fire to the quarters of their rivals. They also engaged in political intrigue against the other, each faction attempting to win control over an academy or secure for one of its scholars the office of Qadi (adjudicator). These sectarian squabbles did not restrict themselves to street violence and agitations, they also manifested themselves into real political and national divisions among the Muslims. The Fatimid dynasty championed its particular brand of Ismailiyya. The Safavids transformed Iran into a Twelver Shi’ite state. The Ayyubids defeated the Fatimids and made Egypt a Sunni Ashari state. The Ottomans promoted the Hanafi school of jurisprudence. The Mughals in India also championed the Hanafi rite. The Saud dynasty enforced its conservative brand of Hanbalism over Arabia. Oman remains to this day the surviving Kharijite state. How absolutely incorrect was Iqbal then when he claimed that the theological variation among the Muslims has acted as a synthetic force for the Muslims. On the contrary, it has led to unimaginable fracture and irreconcilable political division within the Ummah.

Now coming to an allegation that Iqbal levels specifically against the Ahmadiyya movement: “I believe, for reasons to be explained presently, that the idea of a full prophet whose denial entails the denier’s excommunication from Islam is essential to Ahmadism” (p. 20), Iqbal has failed to cite any evidence in his paper that the Ahmadiyya movement expelled anyone from Islam on account of denial of the “prophethood” of its founder Hadrat Mirza Ghulam Ahmad. On the contrary, the latter himself stated:

“From the beginning, my belief has always been that denial of my claims does not render any person a Kafir or a Dajjal.” 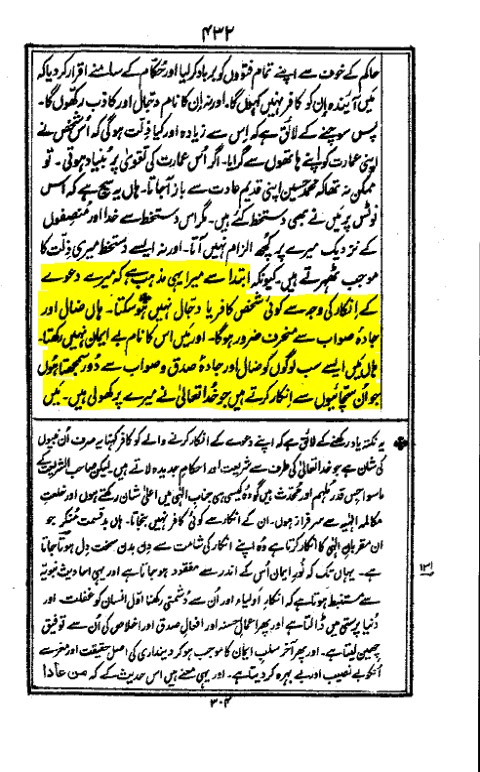