In the Name of Allah; the Entirely Merciful, the Especially Merciful.
May salutations of peace and blessings be showered upon our beloved Prophet Muhammad and upon his family and progeny.

One of the most dangerous political ideologies that masquerades as a “Qur’anic movement” is the Bazm Tolu-e-Islam founded by and based on the heterodox ideas of Mr. Ghulam Ahmad Parwez (1903-1985). The latter, herein referred to as G. A. Parwez, was not only a Hadith-rejecter, but undermined even the basic principles and philosophy of Islam. He rejected some of the most fundamental precepts of our Religion and substituted them for entirely alien and irreligious concepts that are derived from modern and Western political ideologies.
Take for example Mr. Parwez’s concept of Du’a (prayer) and ‘Ibadah (worship). He writes:
یا جب وہ عبادت کا لفظ استعمال کرتا ہے، تو مذہب پرستوں کے ہاں اس سے مفہوم پرستش، پوجا پاٹ، (WORSHIP) ہوتا ہے، لیکن دین کی رو سے اس کے معنی احکام و قوانین خداوندی کی اطاعت ہوتا ہے۔ دین میں پرستش کا تصوّر نہیں بلکہ اطاعت اور محکومیّت کا تصوّر ہوتا ہے
Translation: Those who adhere to Madhhab consider the meaning of the word ‘Ibaadah to be worship. But from the perspective of Deen it means obedience to the Divine commandments and laws. In Deen there is no such concept as “worship”, but instead there is the concept of obedience and being subject to commands.
Reference: Kitab ut Taqdir; p. 361 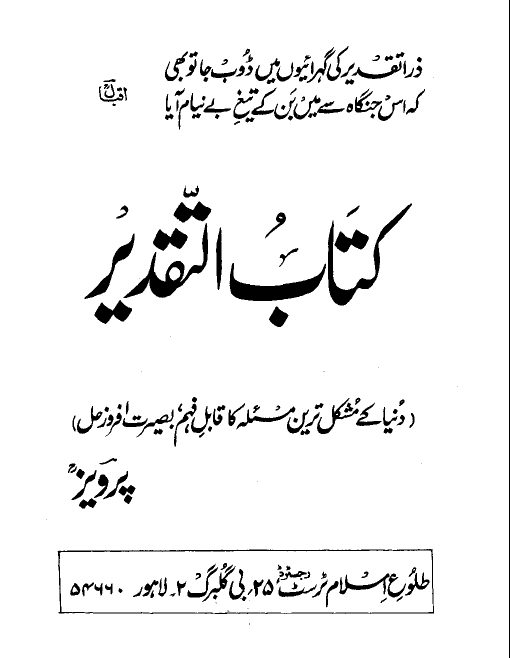 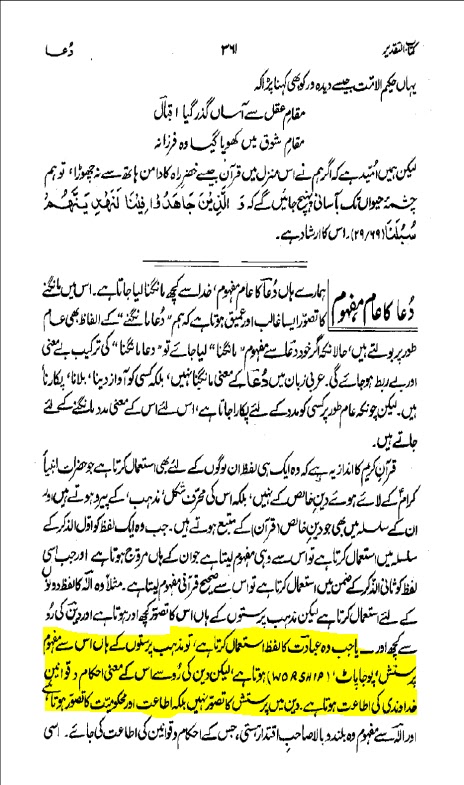 See here how the totally misguided G. A. Parwez has altered the very essence of Islam which is Du’a – to call upon and supplicate to Allah – an act of personal worship between the human being and his Lord. Instead, Mr. Parwez’s poisonous materialistic and pseudo-atheistic ideology forced him to reject the concept of personal worship. He therefore redefined Du’a to simply mean obedience to the Divine laws, which is absurd even from a purely linguistic angle.

But even more absurd than this is Mr. Parwez’s absolutely ridiculous idea that the one who fulfills or answers Du’a is not Allah (God) Himself, but rather the Islamic government!
In his book Kitab ut Taqdir, Mr. Parwez gives one of its chapters the following heading:
مظلوموں کی دعا‍‎ئین اسلامی مملکت سنتی ہے
“The Islamic Kingdom [Government] Listens to the Du’a of the Oppressed” 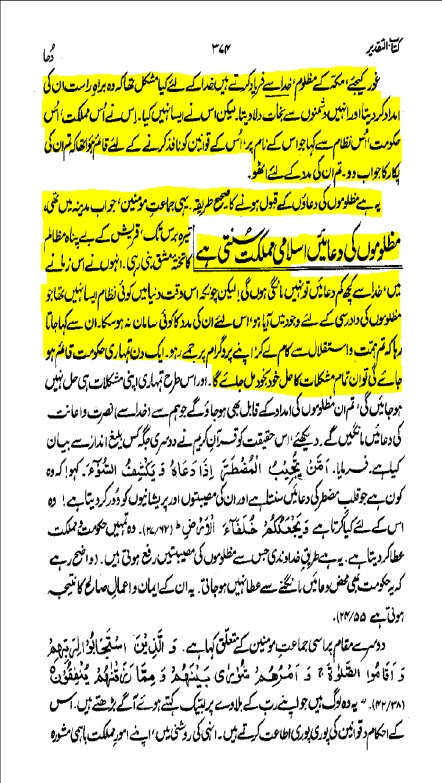 One Khalid M. Sayyed’s translation of Parwez’s book is available on the official website of the Bazm Tolu-e-Islam. Here is how he translates what G. A. Parwez wrote under this chapter:
“The Qur’anic State Answers!
Clearly, Allah does not help the oppressed directly. He does it indirectly through other men…In such a society, no one needs to pray to the Almighty because His representatives on Earth are taking care of them. In such a society there are no individual prayers.”
Any true Believer who reads the above cited excerpt should be shaken to the core and deeply disturbed by such a Satanic idea!
G. A. Parwez goes on to declare that Du’a is a collective act and there is no room for individual or personal supplications or prayers to Allah in Islam. He falsely claims that every Du’a mentioned in the Holy Qur’an is collective and that there are no individual or personal prayers mentioned in the Holy Qur’an:
اس میں کسی کو اپنی انفرادی ضروریات کے لئے خدا سے کچھ مانگنا ہی نہیں پڑتا۔ جسے سب کچھ از خود مل رہا ہو، اسے مانگنے کی کیا ضرورت ہوگی! یہی وجہ ہے کہ قرآن کریم میں مومنین کی جس قدر دعائیں مذکور ہیں سب اجتماعی ہیں، انفرادی نہیں۔
Translation: In it there is no need for anyone to ask God to fulfill their individual needs. What is the need for one who is automatically getting everything to ask for anything? This is the reason why in the Qur’an al-Karim all of the Du’as of the Believers that have been mentioned are collective and not individual.
Reference: Kitab ut Taqdir; p. 377 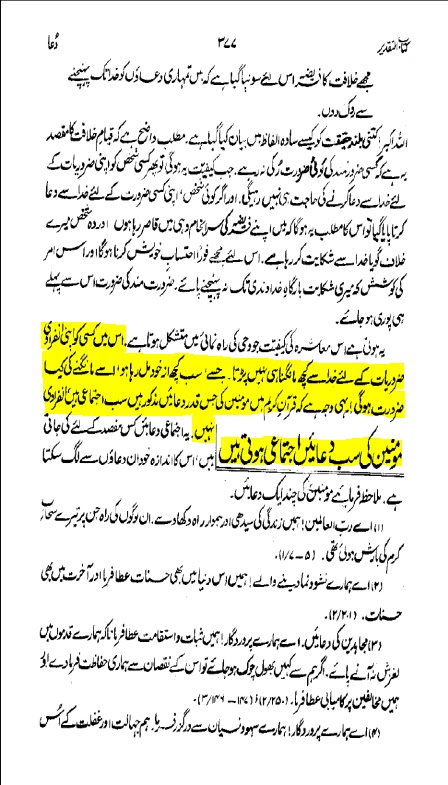 But the reality is that G. A. Parwez was either woefully ignorant of the Book he claimed to champion and have studied intensely, or, more likely, that he engaged in pure deception to pull the wool over the eyes of the people.
The fact of the matter is that the Holy Qur’an mentions numerous prayers of Prophets and other Believers which are personal or individual prayers. Take for example the personal prayer of the priest and prophet Zechariah (peace be upon him) mentioned in the Holy Qur’an:
هُنَالِكَ دَعَا زَكَرِيَّا رَبَّهُ ۖ قَالَ رَبِّ هَبْ لِي مِن لَّدُنكَ ذُرِّيَّةً طَيِّبَةً ۖ إِنَّكَ سَمِيعُ الدُّعَاءِ۝
At that, Zechariah called upon his Lord, saying, “My Lord, grant me from Yourself a good offspring. Indeed, You are the Hearer of supplication.” (3: 38)

One is amazed at how the totally misguided Parwez simply glossed over this and many other similar Du’as mentioned in the Holy Qur’an which are individual prayers that are personal and not collective. We have already seen how Parwez rejects the concept of personal worship and prayer to Allah, and holds to the idea that it is the Islamic state which fulfils all the needs of the people. How then could he have explained the personal prayer of prophet Zechariah (peace be upon him) who supplicated to Allah that He should grant him a pure and righteous son? People pray to God for children, and that is an intimately personal kind of prayer that does not concern any government or state whatsoever. In fact, Allah in the Holy Qur’an encourages Believers to pray to Him to grant them wives and children (Sura 25: 74). This obviously does not jive with Parwez’s absurd notion that it is the Islamic state which, by fulfilling the rights and needs of its citizens, is the agency through which people’s prayers are answered, and that there is no concept of personal prayer or supplication to Allah.

Concerning the habit of Muslims to pray for one another, this has presented a dilemma for G. A. Parwez in light of his radically different concept of prayer and worship which is simply alien to mainstream Islam. We have already seen how G. A. Parwez simply does not accept that Allah listens to people’s prayers on a personal level. Instead, he claims that the purpose of Du’a is to verbalize our desires which has a purely psychological effect. According to him, Allah Most High does not directly answer anyone’s prayers or grant anything to anyone out of His pure grace. According to Parwez, people are required to make effort and struggle for an Islamic government through which all of their collective needs are fulfilled. This is the reason why Parwez states that the habit of Muslims in making personal supplications on behalf of each other is merely a manifestation of politeness and “moral support”:
باقی رہا ہمارا ایک دوسرے کے لئے دعا کرنا، تو یہ در حقیقت ان کے حق میں ہماری نیک آرزؤوں کا اظہار ہوتا ہے جس سے انہیں سکون حاصل ہوتا ہے۔ معاملات کی دنیا میں اسے اخلاقی نائید (MORAL SUPPORT) کہا جاتا ہے۔
Khalid M. Sayyed has translated this passage as follows: “As far as praying for someone else is concerned, it is nothing but the expression of one’s good wishes. It acts as moral support for others. One such case in point is the practice of praying for the dead (who of course remain unaffected) which is a solace to the bereaved. Such acts are socially desirable to promote gregariousness.”
Refernece: Kitab ut Taqdir; p. 384 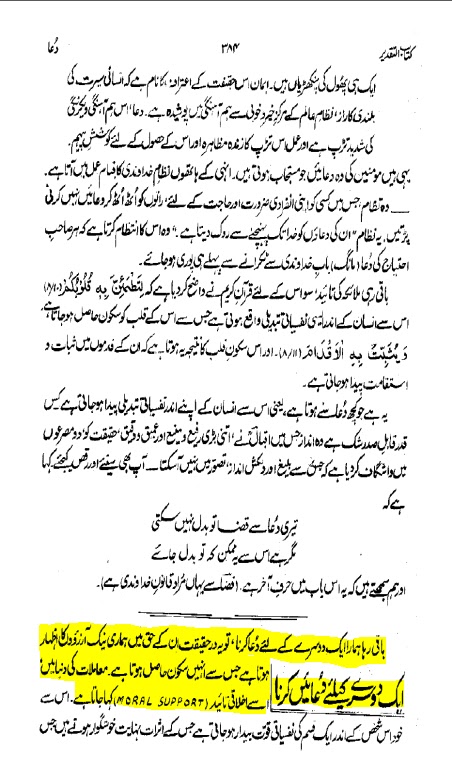 We see here just how far G. A. Parwez and his blind-followers have deviated from the beauty and light of true Islam. Not only do they consider personal prayers which the Believers make for each other as merely an example of moral support and a purely social act to “promote gregariousness”, they also flat out reject that any kind of personal supplication to Allah, including on behalf of the deceased, can have any real affect or benefit.
at November 14, 2016