One of the proofs for the veracity of our beloved Prophet Muhammad (Sallallahu ‘alaihi wa Aalihi wasallam) is his prophecy concerning the duration of his rightly-guided succession, or Khilaafat al-Raashidah.

According to Ahlus Sunnati wal-Jama’ah the Prophet (Sallallahu ‘alaihi wasallam) was succeeded by four rightly-guided successors who were given responsibility for governing the Muslim community. These four individuals (Abu Bakr, ‘Umar, ‘Uthman, and ‘Ali رضى الله عنهم) were the best of the Prophet’s companions and indeed the best of his Ummah.

Their period of governance is considered the golden era in Islamic history by Ahlus Sunnati wal-Jama’ah. The concept of the Mahdi in Islam is based on the idea that a great Islamic saint will lead the Muslim Ummah according to the Sunnah of the Prophet (Sallallahu ‘alaihi wasallam) remnicient of the Prophet’s Rightly-Guided Successors.

The Prophet (Sallallahu ‘alaihi wasallam) prophesied:
الْخِلَافَةُ فِي أُمَّتِي ثَلَاثُونَ سَنَةً ثُمَّ مُلْكٌ بَعْدَ ذَلِكَ
“The Khilaafah within my Ummah is for thirty years, then it shall be proceeded by monarchy”
(Tirmidhi)

The companion Safinah (Radiyallahu ‘anhu) is the narrator of this Hadith, and has himself explained it by calculating the period of the Rightly-Guided Khilaafah:
أَمْسِكْ خِلَافَةَ أَبِي بَكْرٍ ، ثُمَّ قَالَ : وَخِلَافَةَ عُمَرَ ، وَخِلَافَةَ عُثْمَانَ ، ثُمَّ قَالَ لِي : أَمْسِكْ خِلَافَةَ عَلِيٍّ ، قَالَ : فَوَجَدْنَاهَا ثَلَاثِينَ سَنَةً ، قَالَ سَعِيدٌ : فَقُلْتُ لَهُ : إِنَّ بَنِي أُمَيَّةَ يَزْعُمُونَ أَنَّ الْخِلَافَةَ فِيهِمْ ، قَالَ : كَذَبُوا بَنُو الزَّرْقَاءِ بَلْ هُمْ مُلُوكٌ مِنْ شَرِّ الْمُلُوكِ
“Count the Khilafah of Abu Bakr,” then he said: “Count the Khilafah of ‘Umar and the Khilafah of ‘Uthman.” Then he said to me: “Count the Khilafah of ‘Ali.” He said: “So we found that they add up to thirty years.” Sa'eed said: “I said to him: “Banu Umaiyyah claim that the Khilafah is among them.” He said: “Banu Az-Zarqa lie, rather they are a monarchy, among the worst of monarchies.”
(Tirmidhi)

It is historically proven that Abu Bakr was successor for two years, followed by ‘Umar who led for ten years, followed by ‘Uthman who led for twelve years, and then followed by ‘Ali who led for five and a half years. ‘Ali was succeeded by his son al-Hasan (the Prophet’s grandson), who remained as Khalifah for six months. In fact, al-Hasan’s Khilafah is an extension of ‘Ali’s Khilafah and included within it, otherwise all five of them are regarded as Rightly-Guided Caliphs by Ahlus Sunnati wal-Jama’ah (and may Allah be pleased with them all). The total is therefore 30 years, thus literally fulfilling the grand prophecy of our beloved Prophet Muhammad (Sallallahu ‘alaihi wasallam).

Notice also how the companion Safinah (Allah be pleased with him) repudiated the notion that the Umayyad dynasty was to be considered as a Caliphate, rather they were the worst government that ever governed the Muslims in our entire history!

However, the wretched and filthy Nasibi sect, who bear enmity toward the Ahlul Bait (Prophet’s Household), especially Amir-ul-Mu’minin Ali b. Abi Talib and his progeny, and who have excessive love for the Umayyad dynasty including Mu’awiyah, Yazid, Marwan, Walid b. Abdul Malik, are threatened by this Hadith.

The Nasibis regard this Hadith of Safinah which states that the Prophetic Caliphate will last for 30 years as a thorn in their necks. It is for this reason that the Nasibis cast doubt on the authenticity of this Hadith. The contemporary Nasibi mulla Hakim Faiz Alam Siddiqui went so far as to allege that this Hadith is in fact fabricated! He said:
اسی موقعہ کے لیے کسی من چلے نے حدیث سفینہ رض گھڑی جسے امام مسلم نے اپنی صحیح میں درج کر کے دنیائے رفض کے ہاتھ میں ایک بہت بڑا ہتھیار تھمادیا۔
“Someone fabricated the Hadith of SafinahRA which Imam Muslim inscribed in his Sahih thereby handing over a great weapon to the Rawafid.” 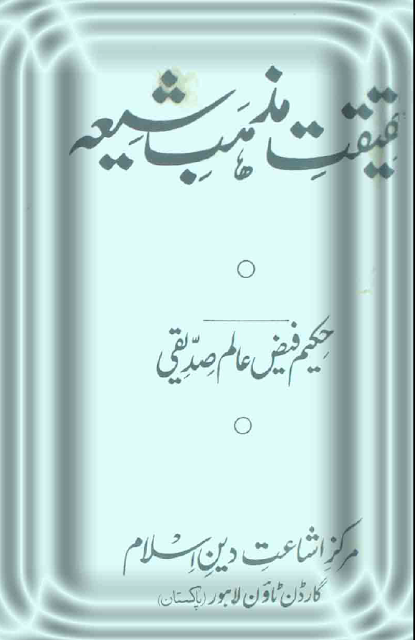 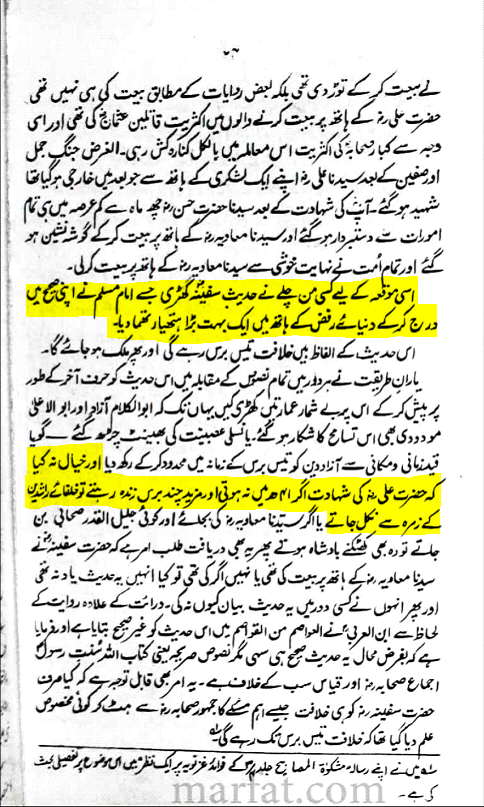 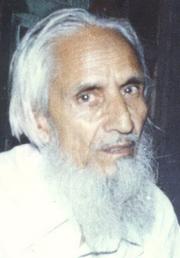 In fact, Faiz Alam has made a huge blunder and exposed his ignorance by claiming that this Hadith is recorded in Sahih Muslim. Although the Hadith is undoubtedly authentic, and we have already cited above two of its references, it is not recorded in Sahih Muslim. One is astounded how such an ignorant Mulla who does not even know the correct reference for this Hadith has the audacity to criticize his authenticity.

Secondly, Faiz Alam ignorantly claims that this Hadith is a weapon for the Rawafid, meaning those Shi’ah who abuse and bear enmity towards the Prophet’s Companions.

But this is yet another example of Faiz Alam’s woeful ignorance and stupidity, because the reality is that this Hadith of Safinah demolishes the Shi’ah doctrine. This Hadith reveals the virtue and correctness of the caliphates of Abu Bakr, ‘Umar, and ‘Uthman. How can Faiz Alam or anyone else conceivably claim that this Hadith is a weapon for the Rawafid or Shi’ah, a sect which rejects the legitimacy of the above three mentioned Caliphs (Allah be pleased with them)?
Furthermore, the Twelver Shi’ah claim that the true Imamate did not end after thirty years, but rather continued for many generations until the alleged occultation of their twelfth Imam in the 9th century C.E. (mid-3rd century of the Islamic calendar).

On the same page, Faiz Alam makes another pathetic attempt to cast doubt on the truthfulness of this Hadith by arguing:

“If Hadrat AliRA was not martyred in year 41 H, but remained alive for a few more years, then he would have been removed from the category of the rightly-guided Caliphs.”

The simply answer to this baseless objection is that Faiz Alam has committed the logical fallacy known as hypostatization. He is missing the point, perhaps intentionally, that precisely because the Prophet (Sallallahu ‘alahi wasallam) made this prophecy about the caliphate lasting for only thirty years that Ali b. Abi Talib (Allah be pleased with him) died at the time he died. Faiz Alam, like a typical Nasibi, exposes not only his deviation of rejecting authentic Hadith, but his deviation in his conception of Qadr or Taqdir (destiny, divine decree).

The Prophet (Sallallahu ‘alahi wasallam) has repudiated the fallacy of Faiz Alam by saying: “If anything befalls you, do not say ‘If only I had done (such and such), the such and such would have happened,’ rather say: ‘Allah has decreed and what He wills He does,’ for ‘if only’ opens the door to the work of Satan.” (Sahih Muslim)

In conclusion, we see how Nasibism exhibits the tendency to reject sound Hadith and employ weak arguments which are in fact forbidden theologically, all due to its satanic enmity toward the Prophet’s Ahl-ul-Bayt (peace be upon them).
at December 28, 2016