The Apostasy of Dr. Abdul Hakim Khan of Patiala

“So the entire Qur’an Majid is filled with the praise of God, and has made Tawhid and purification of the soul as the basis for salvation, and not embracing faith in Muhammad”
Reference: Al-Zikr al-Hakim No. 4; p. 12, footnote
*Note: This idea of Dr. Abdul Hakim constitutes apostasy from Islam as it is rejection of one of the fundamental Articles of Faith. Even the so called orthodox anti-Ahmadiyyah “mullahs” have no choice but to confess that Dr. Abdul Hakim committed apostasy from Islam, something they refuse to do because it will inconvenience them in their blind assault on the the personality of Mirza Ghulam Ahmad and the Ahmadiyyah Movement.
Islam and Iman (Faith) are based on Six Articles of Faith as elucidated in the Holy Qur’an and Sunnah. They are (i) belief in Allah, (ii) belief in His Angels, (iii) belief in His Scriptures, (iv) belief in His Apostles, (v) belief in the Hereafter, and (vii) belief in the Divine Decree.
To reject any one of these Articles of Faith is Kufr that expels a person from the fold of Islam. Consequently, no person can obtain salvation from Hell if he or she rejects belief in any of Allah’s Messengers, especially the Seal of the Prophets and chief among them, Prophet Muhammad (Sallallahu ‘alayhi wasallam).

“He (the Prophet) never said that if any Jew, Christian, worshiper of God, righteous person does not accept me then he will not attain salvation…The Prophet (Sallallahu ‘alayhi wasallam) never said anywhere that all of the worshipers of God and righteous people are Jahannami (going to Hell) until and unless they believe in me.”
Reference: Ibid 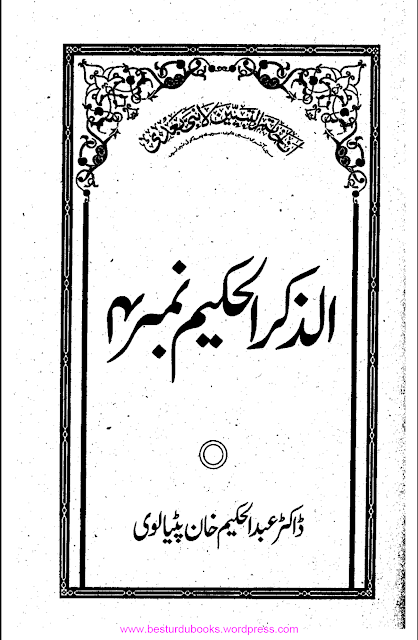 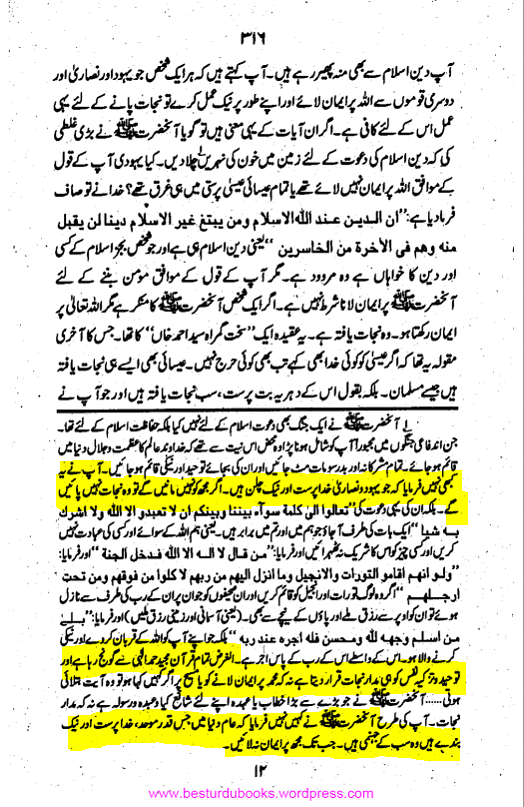 First of all, let the reader beware that Dr. Abdul Hakim has simply lied upon the Prophet (peace be upon him), who emphatically stated:

“By the One in Whose Hand is the Soul of Muhammad, not one of this nation, Jew or Christian, will hear of me and will die without having believed in that with which I have been sent, but he will be one of the dwellers of Hell fire.” (Sahih Muslim)
According to the narration of Abi Musa al-Ashari (Allah be pleased with him), the Prophet (peace be upon him) said:
لا يَسْمَعُ بِي أَحَدٌ مِنْ هَذِهِ الأُمَّةِ ، وَلا يَهُودِيٌّ ، وَلا نَصْرَانِيٌّ ، وَلا يُؤْمِنُ بِي ، إِلا كَانَ مِنْ أَهْلِ النَّارِ

“Not one of this nation, Jew or Christian, will hear of me without having believed in me but he will be one of the dwellers of the Hellfire.” (Musnad Abi Dawud al-Tayalisi)
Furthermore, Allah Most High says in the Holy Quran:
Indeed, those who disbelieve in Allah and His Messenger and wish to discriminate between Allah and His Messengers and say, “We believe in some and disbelieve in others,” and wish to adopt a way in between. Those are the disbelievers, truly. And We have prepared for the disbelievers a humiliating punishment. (Surah 4: 150 – 151)

“But, we expected this to happen soon, as had been announced by Dr. Abdul Hakim of Patiala. The doctor had stated, ‘My revelation concerning Mirza of Qadian, which may kindly be published, is that:  (1) The Mirza will die on the 21st day of Saavan, 1965 (4th August, 1908) of a fatal disease. (2) A distinguished woman of the family of Mirza shall also die.’ [Weekly Ahle Hadith: 15.5.1908]. However, we cannot refrain from saying what is true. Had the doctor stopped at what he had stated before, that is, his prediction of Mirza's death within fourteen months and not fixed a specific date as he has done then those objections could have never been raised as are being raised today by the Paisa Akhbar of the 27th, wherein it is stated that had the prophecy been left as, ‘up to the 21st of Saavan’ and not altered to, ‘on the 21st of Saavan’ it would have, indeed, been wonderful. But alas, his revelation that Mirza will die on the 21st of Saavan, that is 4th of August, has been published in the Ahle Hadith issue of 15th May, 1908. We wish that he would have left his earlier revelations unaltered, without giving a specific date. Then there could have been no excuse.”
(Ahle Hadith, 12 June 1908)


So by Sana Ullah of Amritsar’s own admission, the prediction of Dr. Abdul Hakim failed and turned out to be a cause of humiliation for the opponents of Hadrat Mirza Ghulam Ahmad!
at December 02, 2016