بسم الله الرحمن الرحيم
نحمده ونصلى على رسوله الكريم
The figure of Imam al-Mahdi (Allah be pleased with him) has raised quite a storm of controvery in our day and age among the Muslim community. On the one hand, there are those modernists and materialists who dislike the concept of a future messianic figure whose purpose will be to restore justice in the world and rejuvenate Islam. Many so called “Islamic” sects and parties outright deny the concept of the Mahdi, claiming it is a Shi’ite concoction that has no basis in the Holy Qur’an. This is especially true of the so called Ahl-al-Qur’an (“Qur’anist”) sects who without exception deny the concept of the Mahdi.
Some Muslim states, regimes and governments are also fearful of the concept of a Mahdi, and this has been historically true of tyrannical Muslim dynasties like the Umayyads. In their systems of education they downplay or altogether omit the mention of the promised Mahdi. They are fearful that this idea may lead to religious uprisings against the tyranny of the regime centered around a charismatic figure whom the public may rally around understanding him to be the Mahdi or Messiah. At present, the Saudi royal family which rules over Arabia is perhaps most fearful of the concept of Mahdi, particularly considering what happened in 1979 when the “Mahdist” cult associated with Juhayman al-Utaibi seized control of the sacred Ka’ba in order to bring about the downfall of the Saudi regime.
The establishment ‘Ulema likewise seek to maintain their monopoly over the religious and spiritual leadership of the Muslim Ummah and are nervous about Mahdi claimants who cause disruption and schisms among their blind-followers.
Nevertheless, the creed of the true Ahlus Sunnati wal-Jama’ah is that the idea of the Mahdi is true, and there are numerous authentic Hadith which predict his advent and describe his characteristics. These Hadith when examined closely collectively (and not in isolation of each other) give us a clearer picture about the Mahdi. We know that he is to be from the Ahl al-Bayt (Prophetic Household), from the Prophet’s progeny through his beloved daughter Fatima (Allah be pleased with her). He is described as having a broad forehead and an aquiline nose, differing from the Prophet (peace be upon him) in physical appearance, but resembling him in character and personality traits. Furthermore, he will come to spread justice in an unjust world full of tyrannical and oppressive governments.
It is reported that one of the signs for the appearance of the Mahdi will be seen in the heavens, such as a lunar and solar eclipse occurring in the holy month of Ramadan.
Some Hadith suggest that the Messiah (second coming of Jesus) and the Mahdi are synonymous. For example the Hadith recorded in the Sunan of Ibn Maja:
لَا الْمَهْدِيُّ إِلَّا عِيسَى ابْنُ مَرْيَمَ
“There is no Mahdi except Jesus son of Mary”
Although there is weakness in the Sanad of this Hadith, an authentic Hadith confirms that Jesus in his second coming is described as the Mahdi:
يُوشِكُ مَنْ عَاشَ مِنْكُمْ أَنْ يَلْقَى عِيسَى ابْنَ مَرْيَمَ إِمَامًا مَهْدِيًّا ، وَحَكَمًا عَدْلًا ، فَيَكْسِرُ الصَّلِيبَ ، وَيَقْتُلُ الْخِنْزِيرَ ، وَيَضَعُ الْجِزْيَةَ ، وَتَضَعُ الْحَرْبُ أَوْزَارَهَا
“Whoever lives (long) among you will meet Jesus son of Mary, Imam, Mahdi, a just arbiter. He will break the cross, slay the swine, abolish the Jizya and put an end to war”
(Musnad of Imam Ahmad)
The eminent Tabi (student of the Sahaba), and exegete, Mujahid b. Jabr (d. 722 C.E) likewise stated:
الْمَهْدِيُّ عِيسَى ابْنُ مَرْيَمَ
“The Mahdi is Jesus son of Mary”
(Musannaf Ibn Abi Shayba; Kitab-uz-Zuhd) 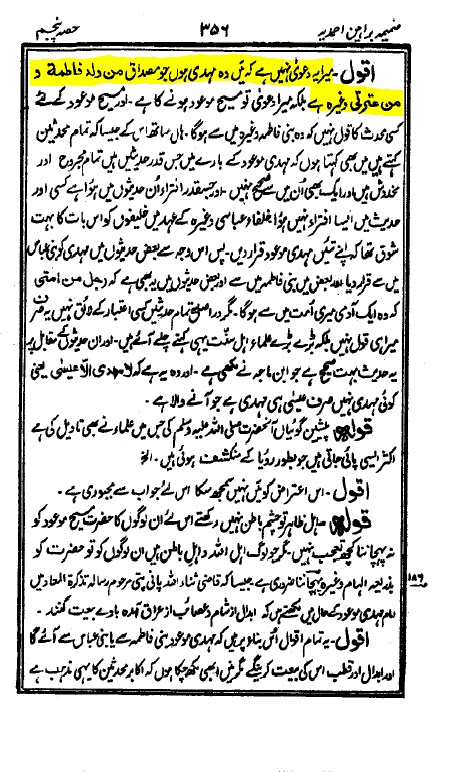 Regarding the advent of such a Mahdi as described by the literal purport of the Hadith, Ghulam Ahmad said:
اور ممکن ہے کہ امام محمدص کے نام پر بھی کوئی مہدی ظاہر ہو
“It is possible that a Mahdi with the name Imam Muhammad (S) will appear”
Reference: Ruhani Khaza’in; v. 3, p. 379 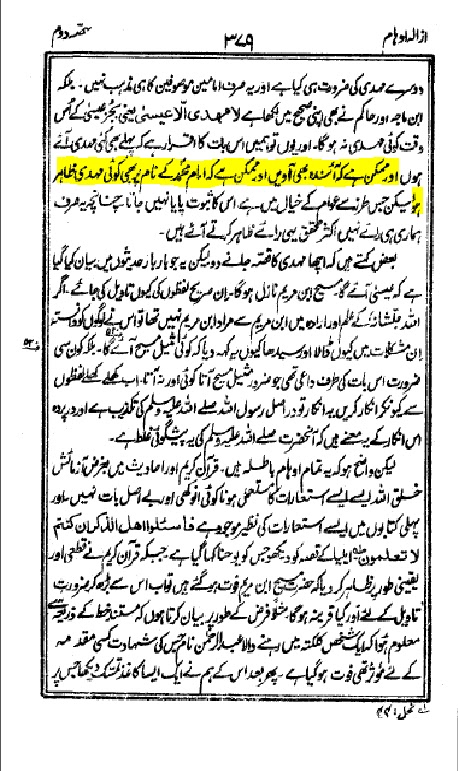