In the Name of Allah; the Entirely Merciful, the Especially Merciful

Peace and blessings be upon our beloved Prophet Muhammad, and upon his family and companions, and true followers

One of the amazing prophecies of Hadrat Mirza Ghulam Ahmad of Qadiyan (alayhis salaam) is concerning the fate of one of Pakistan’s Prime Ministers, Zulfikar Ali Bhutto (1928-1979). The latter was a populist and leftist politician who became Prime Minister after Pakistan’s devastating civil war in 1970-1971. In 1974, under pressure from the Mullas and eager to prove his “Islamic” credentials, Bhutto’s National Assembly (Pakistan’s Parliament) unjustly declared the Ahmadiyyah sect as a non-Muslim minority by way of an amendment to the constitution. 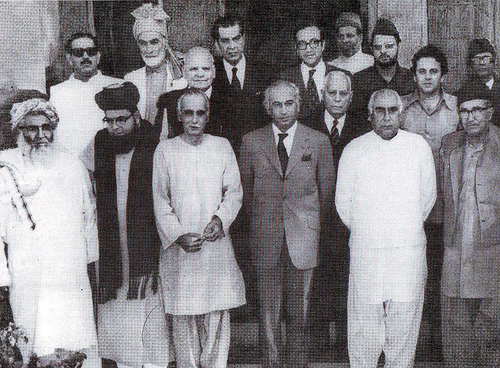 However, as accurately predicted by Hadrat Mirza sahib just short of a century earlier, Bhutto had a terrible end which became a Sign for the whole world, and the Muslims of Pakistan in particular. In 1977, General Zia-ul-Haq overthrew Bhutto’s government in a military coup. Bhutto was arrested and faced charges of conspiring to murder a political opponent. He was found guilty in a court of law and sentenced to death. On 4 April, 1979, former Prime Minister Zulfikar Ali Bhutto was hung to death in utter disgrace.

With regard to the death of a certain person, God the Almighty revealed to me through the value of letters of the alphabet, namely: “He is a dog and he will die according to the value of the letters in the word kalb [dog]”, which amounts to fifty-two. This means that his age will not exceed fifty-two years and that he will die within the course of his fifty second year. 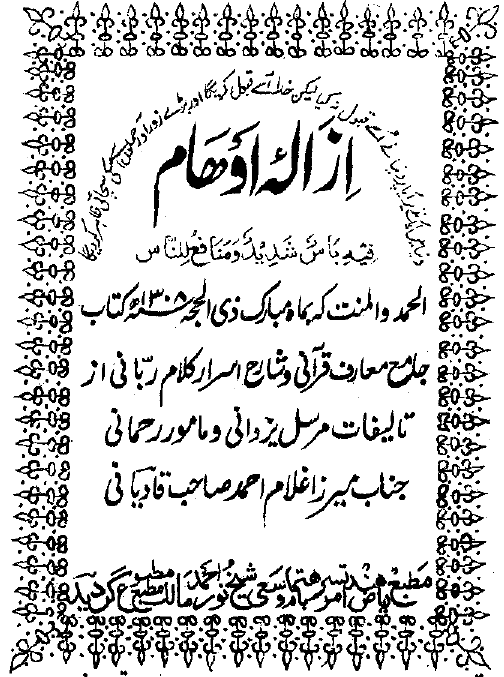 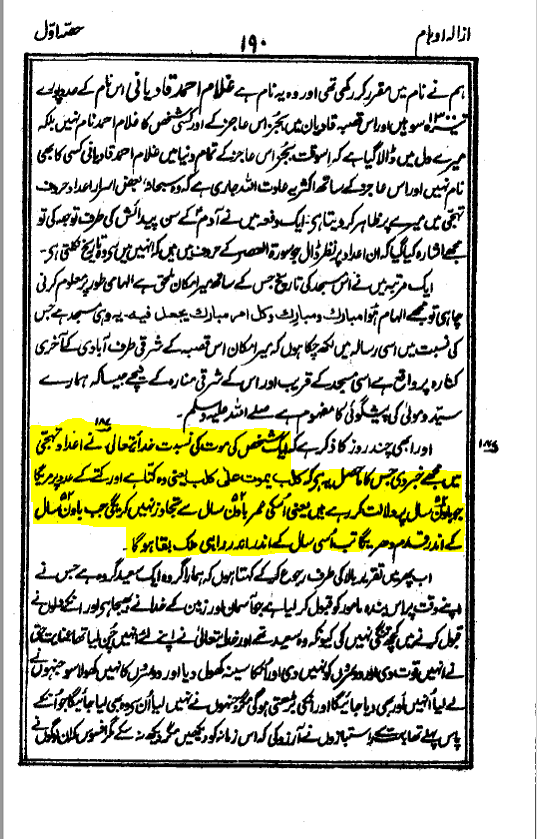 See how incredibly accurate this prophecy was! Zulfikar Ali Bhutto was indeed a “dog” who died the death of a “dog”, i.e., he was hung in the gallows in utter disgrace. Tarek Fatah writes some of the grizzly details of this digraceful end of Bhutto:
“It was just after midnight on April 4, 1979. Zulfiqar Ali Bhutto, the deposed prime minister of Pakistan, lay on the floor of his dark cell in Rawalpindi jail, awaiting his end. His death sentence had been signed by the Islamist military dictator, General Muhammad Zia-ul-Haq, and the hanging was scheduled for 5:00 AM. Wasted by malaria and diarrhoea, the once proud and arrogant leader of Pakistan could do little more than stare at the ceiling, counting his last hours. Suddenly, the silence of the prison night was broken by the thud of marching boots coming towards his dimly lit cell. As the emaciated Bhutto turned towards the iron bars, he saw a colonel and two other army officers stop in front of his cell and unlock the door. “Come to gloat or watch a murder?” Bhutto sneered at the three men in uniform. The grim-faced colonel wasted no time with pleasantries. He had come with a last-minute offer: should Bhutto sign a confession, admitting that it was he who had authorized the military coup in which General Zia-al-Haq had toppled his government, he would live; otherwise gallows awaited him. Enraged, Bhutto lashed out at the officers. “Shameless bastards. I don’t want a life of dishonour, lies. Now get out!” But the army officers were relentless. They had orders to secure a signed confession from Bhutto, no matter what. One soldier grappled with Bhutto while the other forced a pen into his hand. The colonel barked an order: “Sign it!” Though weakened by disease and starvation, Bhutto did not go down without a fight. Breaking free from the soldiers’ grasp, Bhutto landed a punch on the colonel’s face. In the fracas that followed, Bhutto fell, his head striking the wall. He collapsed into unconsciousness. As the officers tried to force him to his feet, they found his body had gone limp. The colonel was in panic. Dead men don’t sign confessions. He summoned the prison doctors, but despite attempts to revive him, the prime minister of Pakistan did not regain consciousness…Bhutto’s body was dragged to the gallows, where the hangman was told the prime minister had fainted. The hangman, however, refused to go with the process, avowing that he was a good Christian and could not hang a person who was already dead. The colonel ordered him to do his work or face the consequences. The noose was placed around Bhutto’s neck, his body erect above the platform. From beneath his feet, the trap door opened. Many innocent men have been sent to the gallows, but few have been murdered twice.” (Chasing a Mirage; pp. 3-4)


Interestingly, Bhutto was exactly 51 years and 3 months old at the time of his death, in precise fulfilment of the prophetic words: “his age will not exceed fifty-two years and that he will die within the course of his fifty second year.”
at January 11, 2017