Punishment of Stoning for Adultery


The issue of Rajm or stoning to death for the crime of adultery is a controversial one in the present age. Because Western, secular civilization has been ascendant for some time, immorality and corruption, manifested through such crimes as adultery for example, has become widespread; to such an extent that people are uncomfortable to hear that in the Islamic Shari’ah the punishment for committing adultery is stoning to death.


Some modern-day Muslims deny Rajm and claim that the command to stone the adulterer to death is nowhere found in the Holy Qur’an, which only institutes the punishment of flogging with a hundred stripes the man and woman found guilty of Zina (fornication). They further argue that the Islamic tradition of stoning for adultery was wrongly imported into the Religion from Judaica.


Historically, the first group of Muslims to deny the legality of Rajm was not these “modernists”, but an ancient Kharijite sect known as the Azariqah named after Nafi’ b. al-Azraq (d. 685 C.E). They were the first to deny stoning to death for adultery as they too claimed it is a punishment that is not found in the Holy Qur’an, despite the fact that the rest of the early Muslim community subscribed to the view that Rajm is the necessary penalty for those found guilty of adultery.


The punishment of Rajm did not begin with, nor is it unique to Islam. This punishment comes down from the Torah as revealed to Prophet Moses:


If a man be found lying with a woman married to an husband, then they shall both of them die, both the man that lay with the woman, and the woman: so shalt thou put away evil from Israel. (Deuteronomy 22:22)


Then they shall bring out the damsel to the door of her father’s house, and the men of her city shall stone her with stones that she die: because she hath wrought folly in Israel, to play the whore in her father’s house: so shalt thou put evil away from among you. (Deuteronomy 22:21)


If a damsel that is a virgin be betrothed unto an husband, and a man find her in the city, and lie with her; Then ye shall bring them both out unto the gate of that city, and ye shall stone them with stones that they die (Deuteronomy 22: 23 – 24)


It is often argued that the Messiah Jesus of Nazareth was opposed to lapidation. Christians cite a story of Jesus forgiving a woman found guilty of adultery, whom the Jews wanted to have stoned to death. This is a Biblical passage found only in the Gospel of John known as the Pericope Adulterae. It is a fabrication not found in the earliest manuscripts, and this is the general consensus of impartial Bible scholars and historians. However, what the Pericope Adulterae reveals to us is that in the time of Jesus, the Jews understood that according to the law of Moses those found guilty of adultery are to be stoned to death:


“They say unto him, Master, this woman was taken in adultery, in the very act. Now Moses in the law commanded us, that such should be stoned” (John 8: 4 – 5)


According to an authentic Hadith:


The Jews came to Allah’s Messenger (ﷺ) and told him that a man and a woman from amongst them had committed illegal sexual intercourse. Allah’s Messenger (ﷺ) said to them, “What do you find in the Torah about the legal punishment of Ar-Rajm (stoning)?” They replied, “we announce their crime and lash them.” ‘Abdullah bin Salam said, “You are telling a lie; Torah contains the order of Rajm.” They brought and opened the Torah and one of them solaced his hand on the Verse of Rajm and read the verses preceding and following it. ‘Abdullah bin Salam said to him, “Lift your hand.” When he lifted his hand, the Verse of Rajm was written there. They said, “Muhammad has told the truth; the Torah has the Verse of Rajm. The Prophet (ﷺ) then gave the order that both of them should be stoned to death. (‘Abdullah bin ‘Umar said, “I saw the man leaning over the woman to shelter her from the stones.” (Bukhari)


This Hadith has a number of benefits: 1. The Jews considered the Prophet Muhammad (peace be upon him) as a fair and just person; and perhaps they knew in their hearts that he was truly a Prophet, so they went to him to have him judge them and resolve their disputes. 2. The Prophet (peace be upon him) judged the Jews in accordance with the Torah (the Laws of Moses) 3. The Jewish scholars had historically tried to subvert the Laws of Moses and like modern-day Muslims, become lax in their implementation of the divine Laws, even distorting the divine Laws, 4. The Prophet (peace be upon him) consulted with ‘Abdullah b. Salam, a rabbi who converted to Islam, regarding what was actually written in the Torah.


Those who deny the punishment of Rajm (lapidation) for adultery claim that the Holy Qur’an has only instituted the penalty of flogging with a hundred stripes (Surah 24: 2). The answer to this objection is that the word Zina is general in referring to any kind of illegal sexual intercourse, including both premarital and extra-marital relations. We come to know from the Sunnah that there is a specific punishment for extra-marital adultery which is simply not mentioned in the text of the Holy Qur’an. The command of the Holy Qur’an is therefore not at all abrogated or contravened by the practice from the Sunnah to put to death those found guilty of extra-marital adultery through lapidation. The reality is that the Sunnah has only added a punishment for a specific crime, whereas the text of the Qur’an has ordered a punishment for a general crime. Therefore, according to Islamic law, if someone is found guilty of premarital relations, he or she is to be flogged with a hundred lashes only. But if someone is found guilty of extra-marital relations, he or she is to be flogged with a hundred lashes in compliance with the Qur’anic command that is general, and then subsequently stoned to death in accordance to the practice of the Sunnah for having committed a specific form of Zina. This is the explanation of the Lion of God, Sayyidina ‘Ali b. Abi Talib (Allah be pleased with him):


Ali (Allah be pleased with him) had a woman stoned from the people of Kufah. He lashed her on Thurday and stoned her on Friday, and said: “I flogged her according to the Book of Allah (Qur’an) and stoned her in accordance to the Sunnah of Allah’s Prophet peace be upon him.” (Musnad Ahmad)


“Allah Most High clearly commands in the Holy Qur’an that the hand of the thief be cut and the adulterer stoned.” 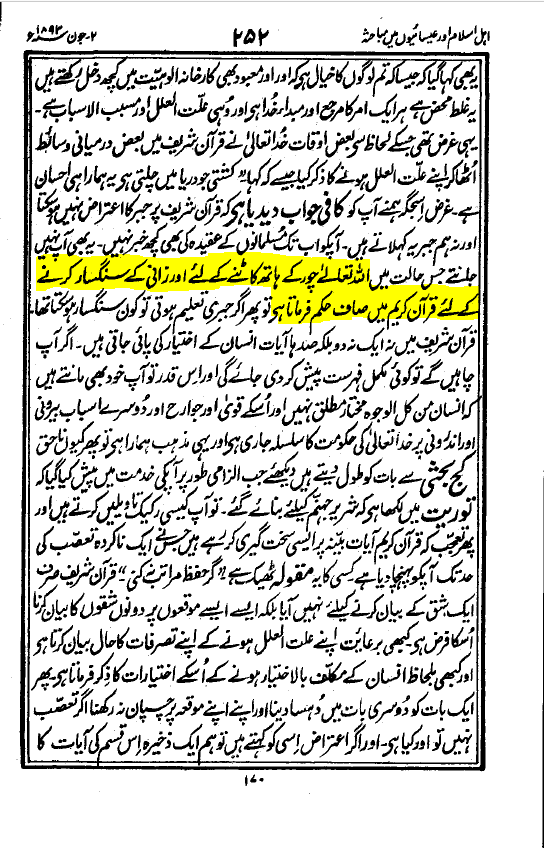 
“A change connected with the time of the Promised Messiah, and mentioned by the Holy Prophet, is the abrogation of penalties prescribed by the criminal law of Islam. Hazrat Ali has narrated according to Dailmy, that one sign of the latter days would be the abrogation of statutory penalties. The sign has been fulfilled. In all Islamic governments today Islamic penalties have disappeared. In Turkey, Arabia, Egypt, and Iran, and even in Afghanistan, ‘stoning for adultery’ and ‘cutting off the hand for theft’ are no longer recognized punishments. Some Muslim governments have agreed to their abrogation under treaty agreements with other countries. This is a clear and a significant sign. When Muslim governments were prosperous and Islamic ideas prevailed, nobody could think that Islamic penalties would ever be set aside. Nobody could imagine that there would arise such a general prejudice against the use of Islamic penalties that even those Islamic governments who wished to retain these penalties would be unable to do so.” 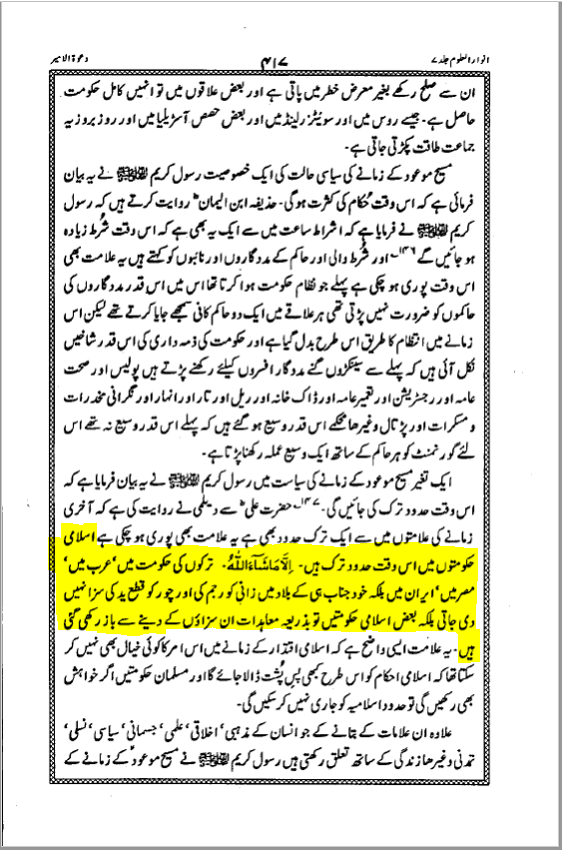