One of the enduring issues in the Sunni-Shi’a controversy is that of Fadak. According to the Shi’a narrative, the Prophet’s (sall Allahu alayhi wa-aalihi wasallam) first successor, sayyidina Abi Bakr (radi Allahu anhu), whom they do not recognize and consider to be, God forbid, a usurper, unjustly denied the Prophet’s daughter sayyidatuna Fatima (radi Allahu anha) the inheritance of Fadak, a piece of land that the Prophet (sall Allahu alayhi wa-aalihi wasallam) acquired as booty after the Battle of Khaybar. According to the Holy Qur’an:


And what Allah restored to His Messenger from the people of the towns - it is for Allah and for the Messenger and for [his] near relatives and orphans and the [stranded] traveler - so that it will not be a perpetual distribution among the rich from among you.


It is quite true that after the Prophet (sall Allahu alayhi wa-aalihi wasallam) died, his luminescent daughter, sayyidatuna Fatima (radi Allahu anha) along with his paternal uncle, sayyidina al-Abbas (radi Allahu anhu), asked the Prophet’s successor sayyidina Abi Bakr (radi Allahu anhu) for the inheritance of Fadak which they felt rightly belonged to them. When sayyidina Abi Bakr (radi Allahu anhu) refused their demand, sayyidatuna Fatima (radi Allahu anha) in particular became upset with sayyidina Abi Bakr (radi Allahu anhu) and ceased speaking to him until she died. The Shi’a cite the authentic Hadith of the Prophet (sall Allahu alayhi wasallam):
فَاطِمَةُ بَضْعَةٌ مِنِّي، فَمَنْ أَغْضَبَهَا أَغْضَبَنِي
“Fatima is a part of me, so whoever angers her angers me”
(Sahih al-Bukhari)
However, the Shi’a conveniently ignore the context in which the Prophet (sall Allahu alayhi wa-aalihi wasallam) made this statement “Fatima is a part of me…” narrated by al-Miswar b. Makhrama (radi Allahu anhu):
عَنِ الْمِسْوَرِ بْنِ مَخْرَمَةَ، قَالَ سَمِعْتُ رَسُولَ اللَّهِ صلى الله عليه وسلم يَقُولُ وَهْوَ عَلَى الْمِنْبَرِ ‏إِنَّ بَنِي هِشَامِ بْنِ الْمُغِيرَةِ اسْتَأْذَنُوا فِي أَنْ يُنْكِحُوا ابْنَتَهُمْ عَلِيَّ بْنَ أَبِي طَالِبٍ فَلاَ آذَنُ، ثُمَّ لاَ آذَنُ، ثُمَّ لاَ آذَنُ، إِلاَّ أَنْ يُرِيدَ ابْنُ أَبِي طَالِبٍ أَنْ يُطَلِّقَ ابْنَتِي وَيَنْكِحَ ابْنَتَهُمْ، فَإِنَّمَا هِيَ بَضْعَةٌ مِنِّي، يُرِيبُنِي مَا أَرَابَهَا وَيُؤْذِينِي مَا آذَاهَا
Narrated Al-Miswar bin Makhrama: I heard Allah’s Messenger (ﷺ) who was on the pulpit, saying, “Banu Hisham bin Al-Mughira have requested me to allow them to marry their daughter to Ali bin Abi Talib, but I don’t give permission, and will not give permission unless Ali bin Abi Talib divorces my daughter in order to marry their daughter, because Fatima is a part of my body, and I hate what she hates to see, and what hurts her, hurts me.” (ibid)
In other words, what initially angered sayyidatuna Fatima (radi Allahu anha) was her husband sayyidina Amir ul-Mu’minin Ali b. Abi Talib’s (radi Allahu anhu) intention of marrying the daughter of Abu Jahl, the enemy of Allah. The Prophet (sall Allahu alayhi wasallam) was totally against such a union, and it was in that context he said: “Fatima is a part of me, whoever angers her angers me” and “the daughter of Allah’s Messenger cannot be joined with the daughter of Allah’s enemy”. It was only then that sayyidina Amir ul-Mu’minin Ali b. Abi Talib (karam Allahu wajhahu) abandoned the idea of marrying the daughter of Abu Jahl.
Returning to the issue of Fadak, what exactly was the Prophet’s successor sayyidina Abi Bakr’s (radi Allahu anhu) rationale for denying the Prophet’s family members its inheritance? The fact of the matter is that being the Prophet’s successor, sayyidina Abi Bakr felt it his duty to manage the estate of Fadak and distribute its proceeds in accordance to the instructions of the Ayah (59:7). The share of those proceeds set aside for the Prophet’s family members would continue to be given, however, the entire estate could not be inherited by them, rather, it had now become a public trust under the management of the Prophet’s successor, i.e., the Islamic government. To justify this arrangement and his denial of distributing Fadak to the Prophet’s family members as their inheritance, sayyidina Abi Bakr cited the Hadith:
لاَ نُورَثُ، مَا تَرَكْنَا صَدَقَةٌ، إِنَّمَا يَأْكُلُ آلُ مُحَمَّدٍ فِي هَذَا الْمَالِ
“We [Prophets] are not inherited from, whatever we leave behind is sadaqa (to be given in charity). But the family of Muhammad may take their sustenance from that wealth.” (Sahih al-Bukhari: Bab Hadithi Bani an-Nadir)
Hence the issue is purely that of inheritance of wealth, otherwise there is no issue over the Islamic government distributing part of the proceeds from what the Prophet Muhammad (sall Allahu alayhi wasallam) left behind as a public trust and a charity to the members of his family for their sustenance. Another sahabi sayyidina Abul-Darda (radi Allahu anhu) has narrated a similar Hadith:
وَإِنَّ الْعُلَمَاءَ وَرَثَةُ الأَنْبِيَاءِ وَإِنَّ الأَنْبِيَاءَ لَمْ يُوَرِّثُوا دِينَارًا وَلاَ دِرْهَمًا وَرَّثُوا الْعِلْمَ فَمَنْ أَخَذَهُ أَخَذَ بِحَظٍّ وَافِرٍ
“Verily, the Ulama (knowledgable) are the inheritors of the Prophets, and verily the Prophets do not leave behind as inheritance dinar and dirham but rather leave behind as inheritance knowledge. So the one who takes it takes an abundant portion.” (Sunan Abi Dawud)
It is contrary to the office of Nubuwwa for a Prophet to gather wealth and then leave behind that wealth as an inheritance for the members of his family, because Prophets are not sent into this world for that purpose, but rather for a higher cause of delivering God’s message to the people and reforming them in accordance with it. Shi’ite polemicists, however, argue that sayyidina Abi Bakr (radi Allahu anhu) fabricated, God forbid, the Hadith that the Prophets are not inherited from, and according to them, such a Hadith is an obvious fabrication since it contradicts the Ayah of the Qur’an:


King David was a Prophet, and when he died, his son Solomon not only succeeded him on the throne but was also blessed with the office of prophecy like his father before him. The Shi’a ask how could the Hadith that Prophets are not inherited from be correct when the Qur’an clearly says that Solomon inherited from David, and both father and son were, apart from being kings, Prophets of God. The reply to this objection is that what Solomon inherited from his father David was not wealth but rather knowledge, as the Hadith narrated by Abul Darda (radi Allahu anhu) states: “Verily, the Prophets do not leave behind as inheritance dinar and dirham but rather leave behind as inheritance knowledge.” So when the Qur’an says that Solomon inherited from David, it doesn’t mean he inherited any personal wealth or a family estate, but rather inherited the knowledge of his father. Solomon in fact inherited the office of Nubuwwa (prophecy) from his father and all the necessary knowledge that is associated with it. Even the context of the Ayah makes that clear, because in the same Ayah it is mentioned:


He [Solomon] said: “O people, we have been taught [‘ullimnaa] the speech of birds”


Furthermore, the Twelver Shi’a should not forget that the narrations about the Prophets not leaving behind material wealth as an inheritance are not only narrated through sayyidina Abi Bakr (radi Allahu anhu) but appear in their literature also as narrations of their “infallible” Imams, such as Imam Aba Abd Illah, who narrates from the Prophet (sall Allahu alayhi wa-aalihi wasallam):
محمد بن الحسن وعلي بن محمد، عن سهل بن زياد، ومحمد بن يحيى، عن أحمد بن محمد جميعا، عن جعفر بن محمد الاشعري، عن عبدالله بن ميمون القداح، وعلي بن إبراهيم، عن أبيه، عن حماد بن عيسى، عن القداح، عن أبي عبدالله عليه السلام قال: قال رسول الله صلى الله عليه وآله: من سلك طريقا يطلب فيه علما سلك الله به طريقا إلى الجنة وإن الملائكة لتضع أجنحتها لطالب العلم رضا به وإنه يستغفر لطالب العلم من في السماء ومن في الارض حتى الحوت في البحر، وفضل العالم على العابد كفضل القمر على سائر النجوم ليلة البدر، وإن العلماء ورثة الانبياء إن الانبياء لم يورثوا دينارا ولا درهما ولكن ورثوا العلم فمن أخذ منه أخذ بحظ وافر
Muhammad ibn al-Hassan and Ali ibn Muhammad has narrated from Sahl ibn Ziyad and Muhammad ibn Yahya from Ahmad ibn Muhammad, all from Ja’far ibn Muhammad al-Ash’ari from 'Abdullah ibn Maymun al-Qaddah and Ali ibn Ibrahim from his father from Hammad ibn ‘Isa from al-Qaddah from abu ‘Abdallah (a.s.) who has said the following. "The holy Prophet has said, ‘If one sets out on a journey to seek knowledge Allah will lead him to the way that would take him to paradise. The angels will stretch their wings for the pleasure of the seeker of knowledge and all that is in the heavens and earth even the whales in the oceans will ask forgiveness for him (from Allah). The excellence of the scholar over other people is like that of the moon over other stars during a full-moon night. The scholars are the heirs of the prophets. The prophets did not leave any Dirham or Dinar (wealth) as their legacy but they did leave knowledge as their legacy. Whoever acquires a share from such legacy has gained a very large share.’" (al-Kafi; Kitab Fadlil-‘Ilm ch.4 h.1): 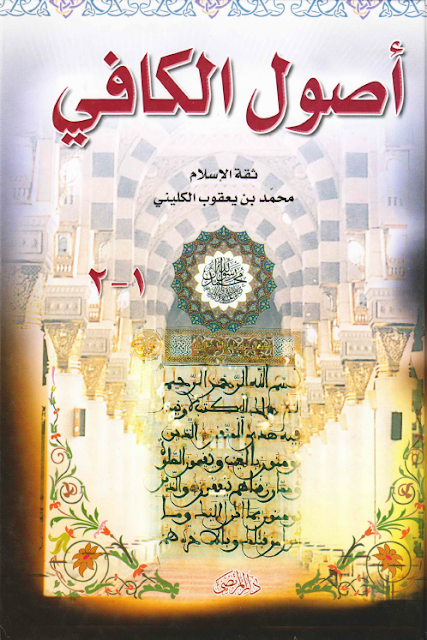 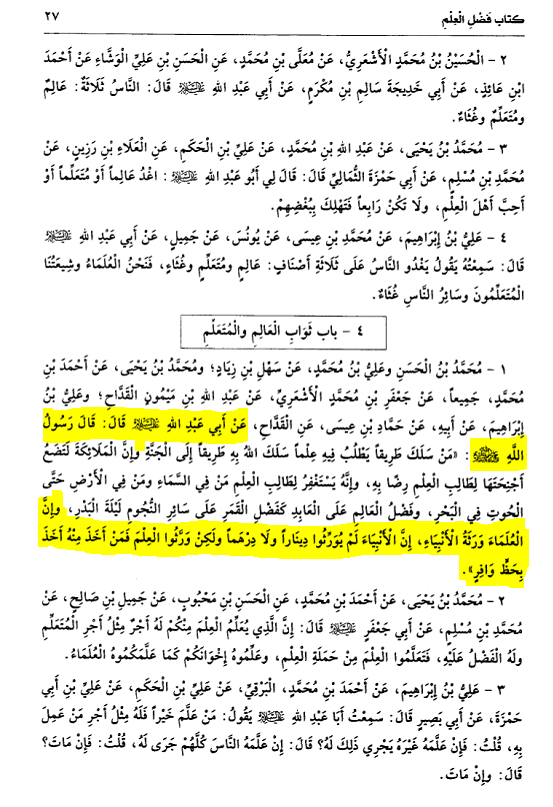 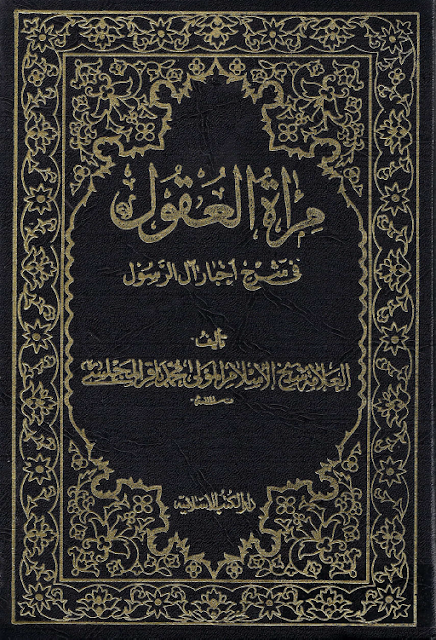 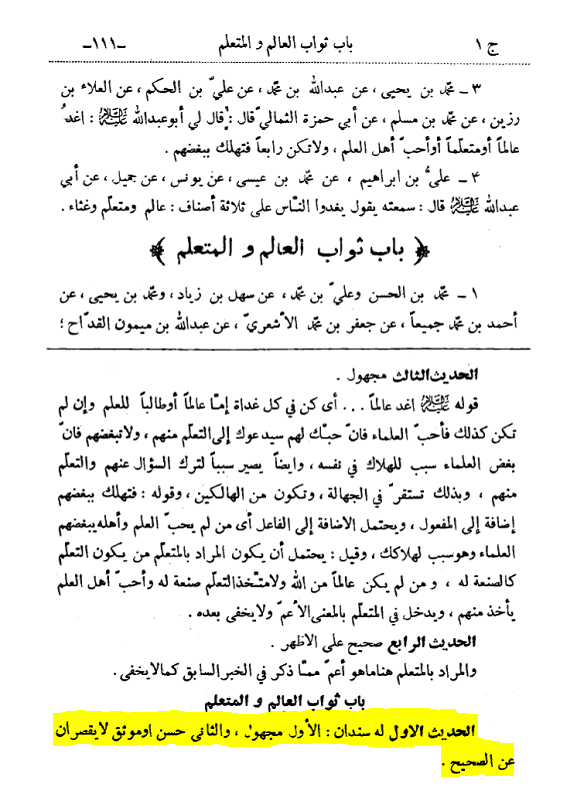 And in al-Kafi is another Hadith in which Imam Aba Abdillah narrates in his own words:
محمد بن يحيى، عن أحمد بن محمد بن عيسى، عن محمد بن خالد، عن أبي البختري، عن أبي عبدالله عليه السلام قال: إن العلماء ورثة الانبياء وذاك أن الانبياء لم يورثوا درهما ولا دينارا، وانما اورثوا أحاديث من أحاديثهم، فمن أخذ بشئ منها فقد أخذ حظا وافرا
Muhammad ibn Yahya has narrated from Ahmad ibn Muhammad ibn ‘Isa from Muhammad ibn Khalid from abu al-Bakhtari from abu ‘Abdallah (a.s.) who has said the following. "The scholars are the heirs of the prophets because the prophets did not leave any Dirham or Dinar, (units of money) as their legacy. What they left was certain pieces of their statements. Those who acquired anything of these pieces of their statements they have certainly gained a large share.” (ch.2 h.2): 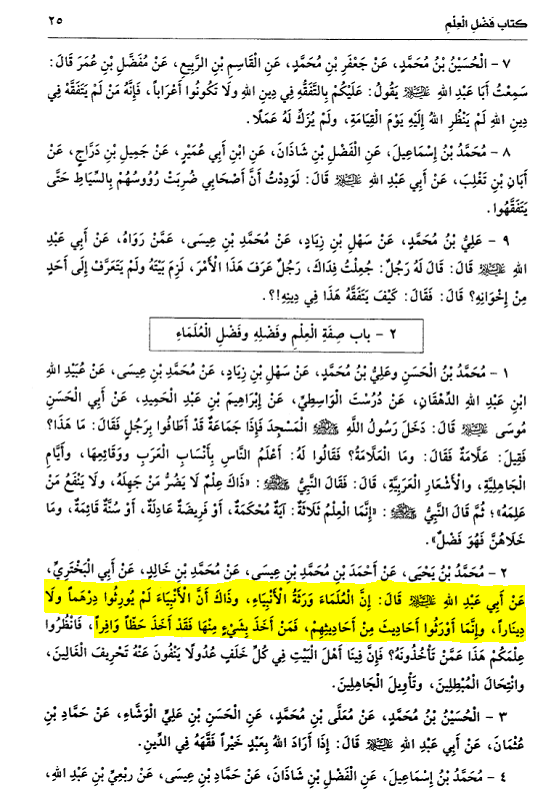