G. A. Parwez's Rejection of Prophesy

Continuing my critique of G. A. Parwez’s book Islam: A Challenge to Religion we now come to the author’s revised conception of Nubuwwa based on his materialist thought: 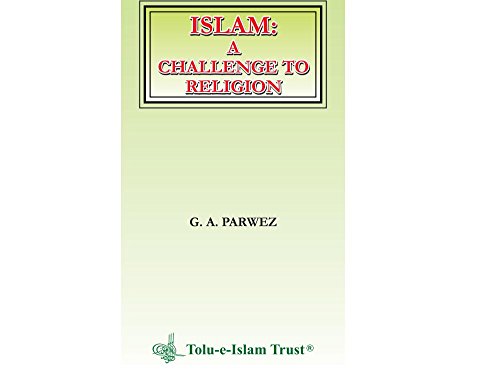 “To understand the nature of nubuwwah we must first get rid of a misconception. In the Jewish-Christian tradition, the ‘prophet’ is a man who prophesies or foretells future events. Endowed with unusual psychic powers, the ‘prophet’ is considered to be capable of foreseeing future happenings of which he warns the people. The Islamic conception of Nabi is quite different. As a matter of fact the term ‘prophethood’ as understood in English is not equivalent to the term ‘nubuwwah’ which the Qur’an uses in this context. The Nabi is not a ‘prophet’ or a soothsayer. His function is not divination but the communication of the revelation which has been vouchsafed to him. ‘Prophecy’ as understood by the Jews is completely irrelevant to the mission of the Nabi. He fulfills his mission if he communicates the Wahi as he has received it, without adding to or taking away anything from it. His purpose is not to prognosticate but to offer moral guidance to man in the light of Divine Revelation.” (pp. 97-98)
Parwez has audaciously declared that a Nabi does not “prognosticate” or “prophesy” i.e., forecast future happenings. He claims that Muslims have inherited a false understanding of what a Nabi is from the Judeo-Christian tradition. However, a cursory reading of the holy Qur’an reveals just how wrong Parwez is. The Qur’an repeatedly states that Allah reveals news of the unseen to the Prophet Muhammad صلى الله عليه وآله وسلم:


ذَٰلِكَ مِنْ أَنبَاءِ الْغَيْبِ نُوحِيهِ إِلَيْكَ
That is from the news of the unseen. We reveal it to you
(Sura 3:44; 12:102)
تِلْكَ مِنْ أَنبَاءِ الْغَيْبِ نُوحِيهَا إِلَيْكَ
That is from the news of the unseen. We reveal it to you
(Sura 11:49)
In the Qur’an itself are numerous prophecies concerning future happenings. For instance, the coming of Gog and Magog (Sura 18:98-99; 21:96),  and the Beast of the Earth (Sura 27:82), victory of the Romans after their defeat (Sura 30:3-4), Jesus the Messiah as a sign of the Hour (Sura 43:61), the visible smoke from the sky (Sura 44:10) etc. Even the Parwezis cannot deny that the Qur’an contains numerous prophecies concerning the approach of the Hour, i.e., Judgment Day, for that is in fact one of its most central themes. The Qur’an also cites the predictions of the Israelite Prophets, such as Jesus’s prophecy of an Apostle after him named Ahmad (Sura 61:6) and that this prophecy of the coming of Prophet Muhammad صلى الله عليه وآله وسلم is written in both the Torah and the Gospel (Sura 7:157). Prophet Moses عليه السلام is quoted as giving glad tidings to his people that Allah shall raise prophets and kings among them (Sura 5:20). Prophet Joseph عليه السلام had seen a vision in which the sun, moon and eleven stars were prostrating to him. Years later when his father Jacob عليه السلام and brothers came to him in Egypt, they prostrated to him, thus fulfilling the vision:


وَرَفَعَ أَبَوَيْهِ عَلَى الْعَرْشِ وَخَرُّوا لَهُ سُجَّدًا ۖ وَقَالَ يَا أَبَتِ هَـٰذَا تَأْوِيلُ رُؤْيَايَ مِن قَبْلُ قَدْ جَعَلَهَا رَبِّي حَقًّا
And he raised his parents upon the throne and they fell down before him in prostration. He said: “O my father, this is the interpretation of the vision from before. My Lord has made it true.”
(Sura 12:100)


The righteous priest Zechariah was given the glad tidings of a son, Yahya عليهما السلام while he was in extreme old age and his wife was barren (Sura 19:7-9). Likewise, non-prophets were given glad tidings of the birth of prophets. Abraham’s wife Sarah was given the glad tidings of the birth of her son Isaac and her grandson Jacobعليهم السلام  (Sura 11:71) and the virgin Mary was given glad tidings of the birth of her son Jesus عليهما السلام (Sura 19:19). Apart from being prophecies of future happenings, these were also examples of miraculous births. Furthermore, Parwez has slandered the concept of prophethood as held to by Jews and Christians by declaring it a type of divination and soothsaying based on “unusual psychic powers”. The Scriptures of the Jews and Christians severely condemn divination and soothsaying. The difference between prophethood and soothsaying is that the former is based on divine revelation from Allah Himself, through the medium of visions, dreams, inspiration or Angels, while divination and soothsaying has no relation to prophesy:
י  לֹא-יִמָּצֵא בְךָ, מַעֲבִיר בְּנוֹ-וּבִתּוֹ בָּאֵשׁ, קֹסֵם קְסָמִים, מְעוֹנֵן וּמְנַחֵשׁ וּמְכַשֵּׁף
יא  וְחֹבֵר, חָבֶר; וְשֹׁאֵל אוֹב וְיִדְּעֹנִי, וְדֹרֵשׁ אֶל-הַמֵּתִים.
There shall not be found among you any one that maketh his son or his daughter to pass through the fire, one that useth divination, a soothsayer, or an enchanter, or a sorcerer, or a charmer, or one that consulteth a ghost or a familiar spirit, or a necromancer.
(Deuteronomy 18:10-11)
at November 29, 2018