People of Scripture Believe in Messiah Before THEIR Deaths (4:159)

بسم الله الرحمن الرحيم
والعاقبة للمتقين
In my recent live discussion with a Deobandi-Hayati Mufti, Sakhawat Ali, student of Mufti Taqi Usmani, concerning the death of the Messiah of Nazareth عليه السلام, the respected Mufti cited as proof for his belief that the Messiah عليه السلام is alive the proceeding Ayah of the Qur’an:
وَإِن مِّنْ أَهْلِ الْكِتَابِ إِلَّا لَيُؤْمِنَنَّ بِهِ قَبْلَ مَوْتِهِ ۖ وَيَوْمَ الْقِيَامَةِ يَكُونُ عَلَيْهِمْ شَهِيدًا
And there is none from the People of the Scripture but that he will surely believe in him before his death. And on the Day of Resurrection he will be over them a witness
(Sura 4:159)


ثُمَّ يَقُولُ أَبُو هُرَيْرَةَ وَاقْرَءُوا إِنْ شِئْتُمْ ‏{‏وَإِنْ مِنْ أَهْلِ الْكِتَابِ إِلاَّ لَيُؤْمِنَنَّ بِهِ قَبْلَ مَوْتِهِ وَيَوْمَ الْقِيَامَةِ يَكُونُ عَلَيْهِمْ شَهِيدًا‏}
Then Abu Huraira said: And recite, if you wish, “And there is none from the People of the Scripture but that he will surely believe in him before his death. And on the Day of Resurrection he will be over them a witness.”
(Sahih al-Bukhari #3448)


But it should be noted here that the Hadith which speak about the second coming of the Messiah mention the fact that he shall slay the Dajjal. The Dajjal will be followed by an army of Jews. According to an authentic Hadith, he shall be accompanied by seventy thousand Jews of Isbahan wearing tallis (Jewish prayer shawls):
قَالَ عِيسَى عَلَيْهِ السَّلاَمُ افْتَحُوا الْبَابَ ‏.‏ فَيُفْتَحُ وَوَرَاءَهُ الدَّجَّالُ مَعَهُ سَبْعُونَ أَلْفِ يَهُودِيٍّ كُلُّهُمْ ذُو سَيْفٍ مُحَلًّى وَسَاجٍ فَإِذَا نَظَرَ إِلَيْهِ الدَّجَّالُ ذَابَ كَمَا يَذُوبُ الْمِلْحُ فِي الْمَاءِ وَيَنْطَلِقُ هَارِبًا وَيَقُولُ عِيسَى عَلَيْهِ السَّلاَمُ إِنَّ لِي فِيكَ ضَرْبَةً لَنْ تَسْبِقَنِي بِهَا ‏.‏ فَيُدْرِكُهُ عِنْدَ بَابِ اللُّدِّ الشَّرْقِيِّ فَيَقْتُلُهُ فَيَهْزِمُ اللَّهُ الْيَهُودَ فَلاَ يَبْقَى شَىْءٌ مِمَّا خَلَقَ اللَّهُ يَتَوَارَى بِهِ يَهُودِيٌّ إِلاَّ أَنْطَقَ اللَّهُ ذَلِكَ الشَّىْءَ لاَ حَجَرَ وَلاَ شَجَرَ وَلاَ حَائِطَ وَلاَ دَابَّةَ - إِلاَّ الْغَرْقَدَةَ فَإِنَّهَا مِنْ شَجَرِهِمْ لاَ تَنْطِقُ - إِلاَّ قَالَ يَا عَبْدَ اللَّهِ الْمُسْلِمَ هَذَا يَهُودِيٌّ فَتَعَالَ اقْتُلْهُ
Jesus peace be upon him will say: “Open the gate”. So it will be opened and behind it is the Dajjal with seventy thousand Jews, each armed with an adorned sword and shawl. So when the Dajjal sees him he will melt like salt in water. He will run away, and Jesus peace be upon him will say: “I have only one blow for you, which you will not be able to escape!” He will catch up with him at the eastern gate of Lod, and will kill him. Then Allah will defeat the Jews, and there will be nothing left that Allah has created which the Jews will be able to hide behind, except that Allah will cause it to speak - no stone, no tree, no wall, no animal - except for the Gharqad (box-thorn), for it is one of their trees, and will not speak - except that it will say: “O Muslim slave of Allah, here is a Jew, come and kill him!”
(Sunan Ibn Maja #4077)


So in light of this and other narrations, it is problematic that all of the People of the Scripture, especially the Jews, will believe in the Messiah before the Messiah’s death, especially if that means during the time of his second advent. These narrations state that during the Messiah’s second advent, the Muslims shall kill thousands of Jews who are part of the Dajjal’s forces. Those Jews will not embrace faith in the Messiah.
Having presented the case of those who believe that the Messiah عليه السلام is physically and bodily alive in Heaven, I will now present our own view that this Ayah is not a proof for their argument. The controversy surrounds the pronoun from “before his death”. According to our view, the pronoun is not referring to the Messiah but instead it refers to any individual from the People of the Scripture. This was apparently the interpretation of the Prophet’s صلى الله عليه وآله وسلم eminent companion sayyidina Ibn Abbas رضى الله عنهما and the great exegete from the Tabi’in, Mujahid b. Jabr رحمه الله (Tafsir Ibn Jarir v.7, pp.667-671): 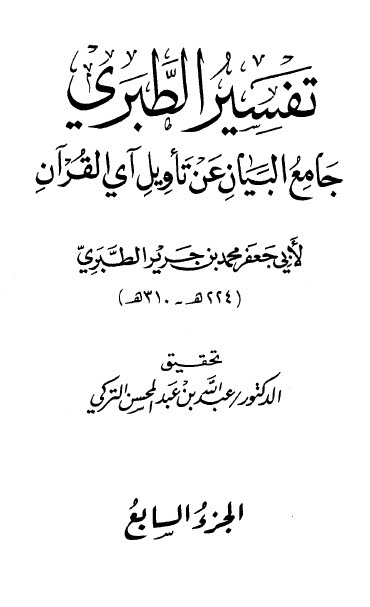 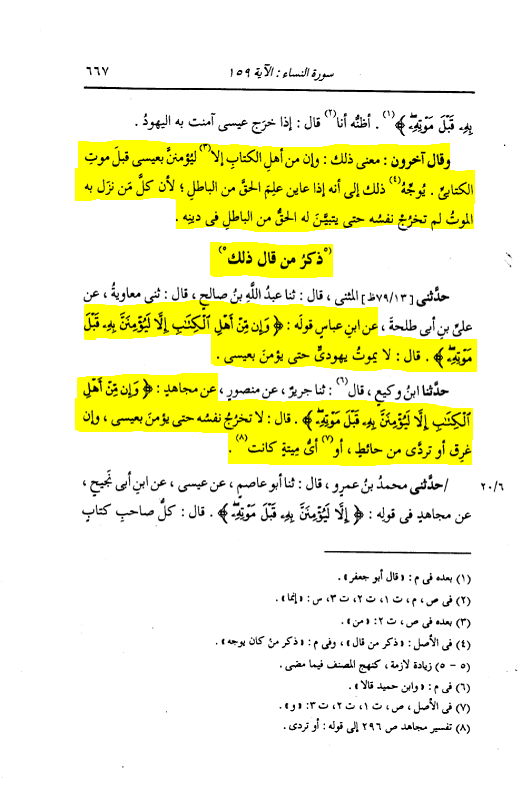 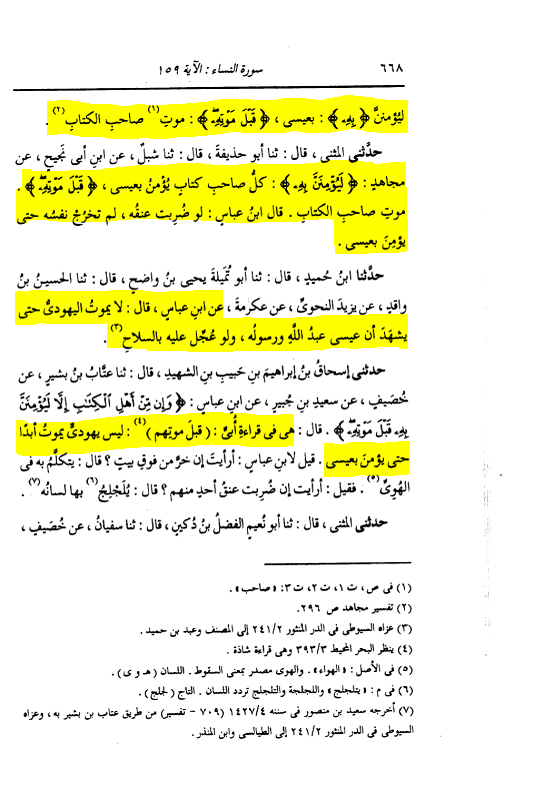 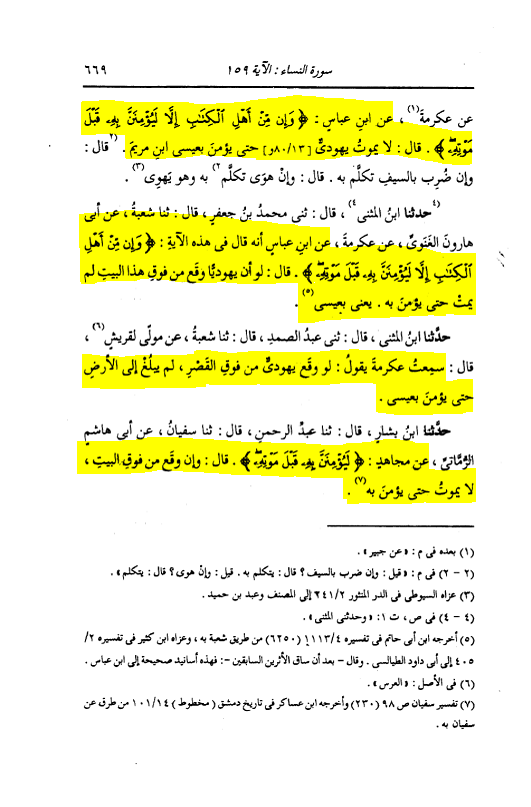 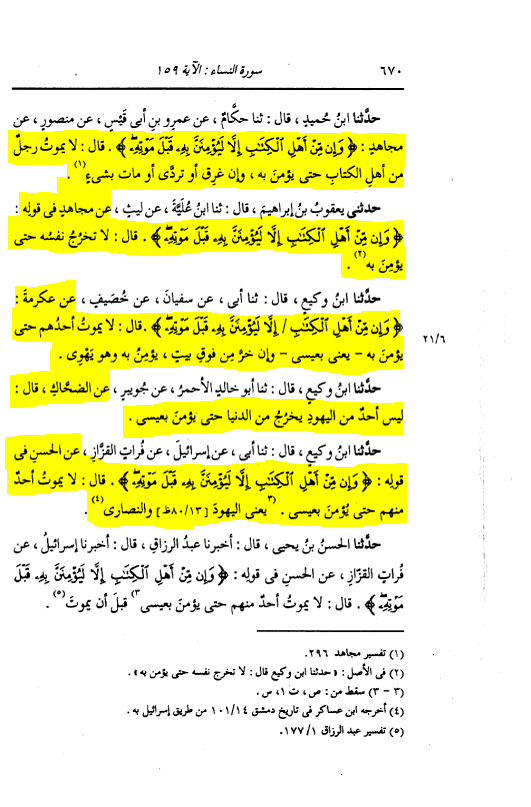 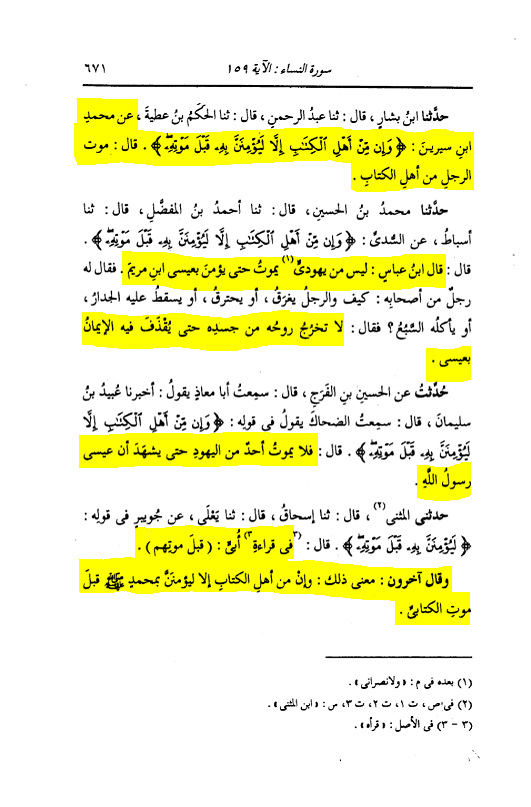 So according to this view, each and every one from the People of the Scripture (Jews and Christians), shall experience a sort of kashaf at the time of his death, just before his soul is being taken out of his body by the Angel of Death, and which it shall be made manifest to him that Jesus of Nazareth is the Messiah and a true prophet of Allah, not the “son of God” and not divine. This is the view of sayyidina Ibn Abbas رضى الله عنهما, in whose favor the Prophet صلى الله عليه وآله وسلم made the following supplication:


For this reason, sayyidina Ibn Abbas رضى الله عنهما is considered the “Imam of the Mufassirin”, and his interpretation of the Ayah (4:159) should be given precedence over any other interpretation.
Now it should be clarified that the Jews and Christians who are made to believe in the reality of the Messiah just before their death are not Believers who shall be granted salvation. The kind of faith in the Messiah they will have no choice but to have is that which does not benefit. It is similar to the faith which the Pharaoh of Egypt proclaimed before he was seized by Allah:


حَتَّىٰ إِذَا أَدْرَكَهُ الْغَرَقُ قَالَ آمَنتُ أَنَّهُ لَا إِلَـٰهَ إِلَّا الَّذِي آمَنَتْ بِهِ بَنُو إِسْرَائِيلَ وَأَنَا مِنَ الْمُسْلِمِينَ
Until when overwhelmed in the flood, he said: “I believe that there is no god except Him Whom the Children of Israel believe in and I am among the Muslims.”
(Sura 10:90)


However, because the Pharoah proclaimed his faith when it was too late, when the proof had already been established against him, and it was not faith in the unseen adapted out of sincerity, his faith was not accepted nor will it benefit him in the afterlife. Another example of this kind of faith is that which the disbelievers will proclaim after some of the manifest Signs of Allah shall appear, such as the rising of the sun from the west:
يَوْمَ يَأْتِي بَعْضُ آيَاتِ رَبِّكَ لَا يَنفَعُ نَفْسًا إِيمَانُهَا لَمْ تَكُنْ آمَنَتْ مِن قَبْلُ أَوْ كَسَبَتْ فِي إِيمَانِهَا خَيْرًا
The Day that certain Signs of thy Lord do come, no good will it do to a soul to believe in them then if it believed not before nor earned good through its faith
(Sura 6:158)


According to an alternative reading of the Verse (4:159) held by sayyidina Ubayy b. Ka’b رضى الله عنه
وَإِن مِّنْ أَهْلِ الْكِتَابِ إِلَّا لَيُؤْمِنُنَّ بِهِ قَبْلَ مَوْتِهِم
“And there is none from the People of the Scripture but they will believe in him before their deaths.”


In this reading, the pronoun from “before his death” is pluralized proving that it cannot be referring to the Messiah of Nazareth عليه السلام who is a single individual, and must be referring to the People of the Scripture (Tafsir al-Baydawi v.2 p.108; Durr al-Manthur v.5 p.107): 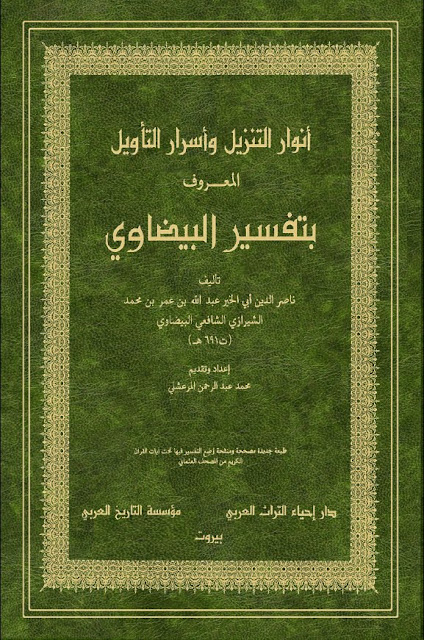 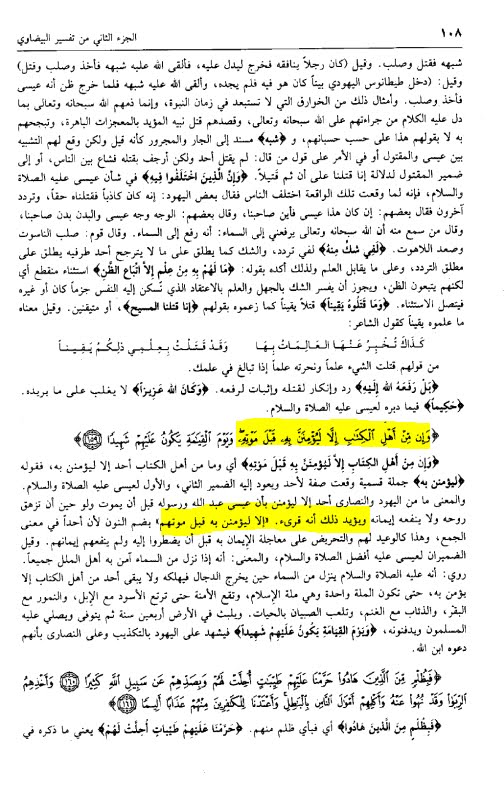 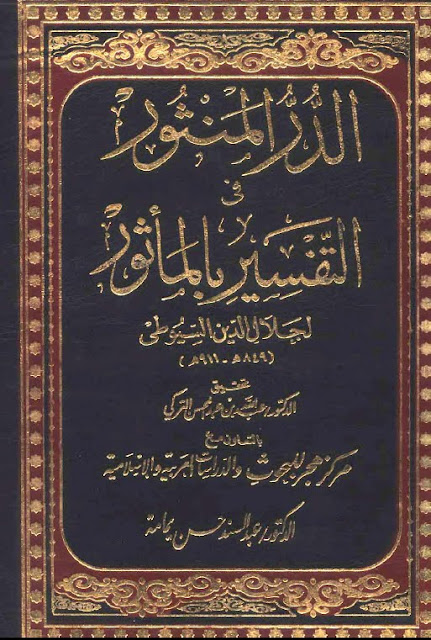 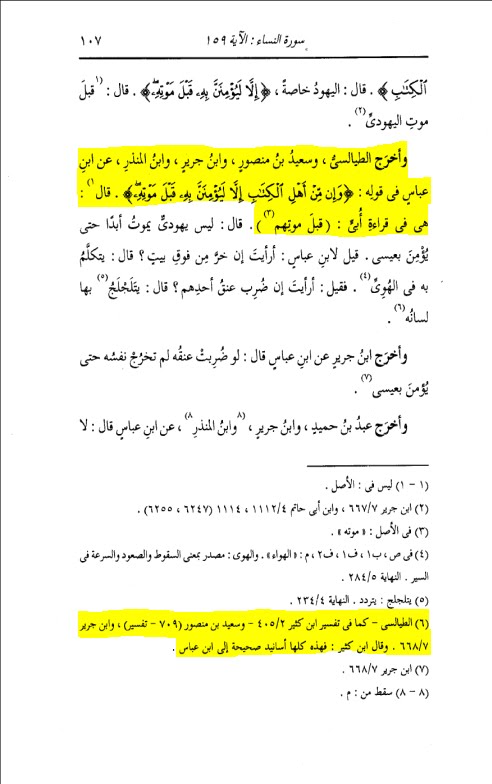 In conclusion, the Ayah (4:159) is in no way a proof that the Messiah of Nazareth is physically and bodily alive and did not experience death in his own time.
at January 20, 2019