Reality of Musaylima the Liar

The so-called khatm un-nubuwwa movement, which has a superficial understanding of the doctrine of finality of prophesy it has made its business to propagate, cites the example of Musaylima b. Habib, the pretender of Yamama, to refute any nuanced explanation that qualifies the meaning of the Prophet Muhammad’s prophesy. What I mean to say is that in the world of Sufism, whenever a saintly individual claims to exhibit within himself the blessed nubuwwa of Prophet Muhammad (peace be upon him), being animated by that nubuwwa due to strict obedience and following in the footsteps of Prophet Muhammad, contemporary “orthodoxy” is quick to brand such a figure as the Musaylima of the day. Musaylima notoriously claimed prophesy during the latter days of the Prophet Muhammad’s life. The Prophet Muhammad had seen a vision in which two gold bangles were placed in his hands, but this caused him distress. Within the vision he was inspired to blow upon the bangles, and doing so they vanished into nothingness. He then interpreted the vision of the two gold bangles as refering to the two pretenders, one of them being Musaylima, and the other being the pretender of San’aa’, al-Aswad al-‘Ansi (Abhala b. Ka’b). Musaylima in fact met the Prophet Muhammad (peace be upon him) in person during the year of the delegations, when he accompanied his tribal delegation of the Bani Hanifa to Madina al-Munawwara. Having outwardly embraced Islam, Musaylima originally coveted the rulership of the Muslims, saying:
إِنْ جَعَلَ لِي مُحَمَّدٌ مِنْ بَعْدِهِ تَبِعْتُهُ
“If Muhammad appoints me after him, I shall follow him”
But in their brief encounter, the Prophet Muhammad rebuked Musaylima and stated that even if he asked for the twig that was in his, the Prophet’s, blessed hand, he would refuse to gift it to Musaylima. It was after this incident that Musaylima, upon his return to Yamama, declared himself a prophet and the Prophet Muhammad (peace be upon him) was then shown the vision of the two gold bangles in his hands. Now it is quite clear that Musaylima was a liar and false prophet, and the personal motivation for him laying claim to prophesy is not hidden from any reasonable person who knows the historical facts. Musaylima’s ambitions and lust for power drove him to claim prophesy, as he felt he could replicate the achievements of the Prophet Muhammad (peace be upon him) and unite his own people, the Arabs of Yamama.
The mullas of the khatm un-nubuwwa movement, consisting of a number of religious organizations generally of Sunni persuasion dedicated to “defending” the doctrine of finality of prophesy particularly against the Qadiyanis or followers of Ghulam Ahmad of Qadiyan, declare that Musaylima was no different from the likes of Ghulam Ahmad and other individuals within the Umma who have made some sort of claim to prophesy while maintaining their membership within the Umma and upholding the Shari’a. This I feel is a grave error for a number of reasons.
Firstly, as I have already explained, whether Musaylima’s claim of prophesy was or was not in itself kufr and apostasy from Islam, we know that Musaylima was a liar and he had personal motives for declaring himself a prophet. For example, if someone claims to be a Muslim, there is nothing wrong with making such a claim in itself, since Allah desires that all humanity embrace Islam and be Muslims. But if someone falsely claims to be a Muslim while rejecting Islam in his heart, such a person is a condemned hypocrite and is in fact worse than an ordinary disbeliever who does not pretend to be Muslim. Such is the case of Musaylima. Whether or not prophesy continues after Prophet Muhammad (peace be upon him) is not really the issue. Musaylima is condemned because he self-evidently lied in claiming prophesy for himself. What greater distinction can there be between Musaylima and certain Sufi saints of the Umma who are unjustly branded heretics for laying claim to the type of prophesy that is figurative because what they mean is that they have been scented with the fragance of the Nubuwwa of sayyidina Muhammad (peace be upon him). Although the scent of the Prophet Muhammad is emanating from their clothes it is obviously not their own scent. They have merely applied it to their persons.
Secondly, the khatm un-nubuwwa movement states that Musaylima claimed for himself the same type of nubuwwa which certain Sufi saints have acknowledged as a legitimate form of nubuwwa and which the likes of Ghulam Ahmad of Qadiyan and other ummatis laid claim to. This is patently false. It is true that Musaylima acknowledged the prophesy of sayyidina Muhammad (peace be upon him), at least initially, as expressed in the epistle he wrote to our Prophet. But unlike Ghulam Ahmad, Musaylima did not declare himself subordinate to Prophet Muhammad, rather, he said he was his partner and equal:
إِنِّي قَدْ أُشْرِكْتُ فِي الأَمْرِ مَعَهُ
“I have been partnered in this matter [prophesy] with him”
[Tarikh at-Tabari]
Musaylima also expressed his exact da’wa in his well known epistle to Prophet Muhammad (peace be upon him):
مِنْ مُسَيْلِمَةَ رَسُولُ اللَّهِ ، إِلَى مُحَمَّدٍ رَسُولِ اللَّهِ : سَلامٌ عَلَيْكَ . أَمَّا بَعْدُ : فَإِنِّي أُشْرِكْتُ مَعَكَ فِي الأَمْرِ ، وَإِنَّ لَنَا نِصْفَ الأَرْضِ ، وَلِقُرَيْشٍ نِصْفَ الأَرْضِ ، وَلَكِنَّ قُرَيْشًا قَوْمٌ يَعْتَدُونَ
“From Musaylima, Apostle of Allah, to Muhammad, Apostle of Allah: Peace be upon you. To proceed: I have been partnered with you in the matter. Verily, for us is half the land and for Quraysh is half the land, but Quraysh are a transgressing people.” 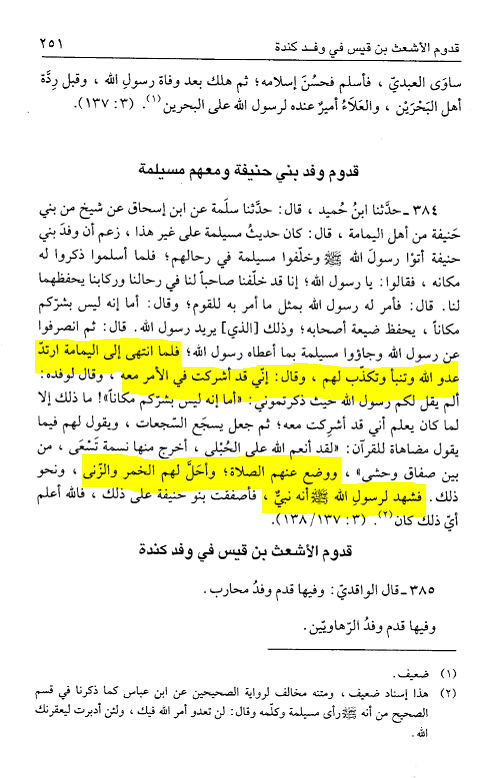 So it is evident that Musaylima claimed the prophesy of partnership. In other words, he held himself to be equal to the Prophet Muhammad (peace be upon him). To clarify, what is meant by partnership or sharing is meant sharing the rank of nubuwwa, and not sharing a single nubuwwa. This is in stark contrast to the various saints and Sufis of the Umma who spoke of fana fil-Rasul, meaning having their own personalities annihilated and taking on instead the persona of the Prophet Muhammad (peace be upon him). By being the repository of that persona, they might have said something to the effect of “I am the Prophet”, figuratively of course, and not at all in the sense in which Musaylima the Liar said: “I am a prophet”.
Thirdly, Musaylima altered the Religion and Shari’a of Prophet Muhammad. For example, he proclaimed wine and fornication licit, and demolished the institution of Salat – the five daily prayers.
Fourthly, Musaylima stood in opposition to not only the Prophet Muhammad (peace be upon him), but also in opposition to the institution of Khilafa, and the Prophet’s true successor, sayyidina Abi Bakr (Allah be pleased with him).
at January 14, 2019