Sunna to Urinate While Seated

بسم الله الرحمن الرحيم
والصلوة والسلام على رسوله الكريم
والعاقبة للمتقين
Recently, a popular YouTube preacher, Engineer Muhammad Ali Mirza, came out and stated that it is from the Sunna for a man to urinate while standing, quoting the Hadith in Sahih al-Bukhari:
عَنْ حُذَيْفَةَ ـ رضى الله عنه ـ قَالَ لَقَدْ رَأَيْتُ رَسُولَ اللَّهِ صلى الله عليه وسلم، أَوْ قَالَ لَقَدْ أَتَى النَّبِيُّ صلى الله عليه وسلم سُبَاطَةَ قَوْمٍ فَبَالَ قَائِمًا
Hudhaifa (may Allah be pleased with him) said: “I saw Allah’s Apostle (peace and blessing of Allah be upon him)” - or he said - “The Prophet (peace and blessing of Allah be upon him) came to the dumps of a people and urinated while standing” (Sahih al-Bukhari #2471)

While this Hadith is certainly true, to understand from it that it is a “Sunna” to urinate while standing is a great error. The truth is that an isolated incident under special circumstances cannot become a Sunna if it is contrary to the regularly practiced Sunna of the Prophet (peace and blessing of Allah be upon him).
The Hadith has been quoted in Mishkat al-Masabih, where the author, Khatib al-Tabrizi (d. 741 H), comments:
كان ذالك لعُذرٍ
“That was for an excuse”
(Mishkhat ul-Masabih #364): 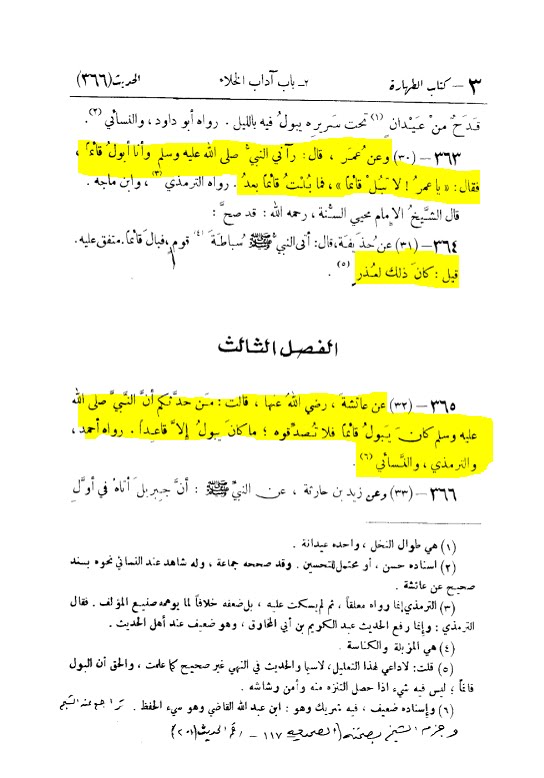 Meaning, the Prophet (peace and blessing of Allah be upon him) only urinated while standing at that spot because to sit and urinate there would have soiled his clothing. This does not mean that men should therefore urinate while standing regularly, but is a proof that they may do so in order to save their clothes from being soiled, i.e., under exceptional circumstances.
This is why the Mother of the Believers, sayyidatuna A’isha (may Allah be pleased with her) said:
مَنْ حَدَّثَكُمْ أَنَّ النَّبِيَّ صلى الله عليه وسلم كَانَ يَبُولُ قَائِمًا فَلاَ تُصَدِّقُوهُ مَا كَانَ يَبُولُ إِلاَّ قَاعِدًا
“Whoever relates to you that the Prophet sall Allahu alayhi wasallam would urinate while standing then do not accept it, for he did not urinate except while seated.” (Jami at-Tirmidhi #12)
So it is established that the Prophet’s Sunna is to urinate while seated, and this was his consistent, regular practice. The misguided engineer has made a grievious error by stating that to urinate while standing is the Sunna and should repent from his reckless ignorance through which he is leading his blind-followers astray. According to some other Hadith, though they may contain some slight weakness, the Prophet (peace and blessing of Allah upon him) expressly forbade urinating while standing:
عَنْ عُمَرَ قَالَ رَآنِي النَّبِيُّ صلى الله عليه وسلم وَأَنَا أَبُولُ قَائِمًا فَقَالَ ‏ "‏ يَا عُمَرُ لاَ تَبُلْ قَائِمًا ‏"‏ ‏.‏ فَمَا بُلْتُ قَائِمًا بَعْدُ
Umar (may Allah be pleased with him) said: I saw the Prophet sall Allahu alayhi wasallam while I was urinating standing, so he said: “O Umar, do not urinate while standing”. After that I never urinated while standing. (ibid)
Similarly, sayyidina Umar radi Allahu anhu said:
مَا بُلْتُ قَائِمًا مُنْذُ أَسْلَمْتُ
“I have not urinated while standing since I became a Muslim” (ibid)
And the great jurist of the companions, sayyidina Ibn Mas’ud (radi Allahu anhu) stated:
إِنَّ مِنَ الْجَفَاءِ أَنْ تَبُولَ وَأَنْتَ قَائِمٌ
“Among the loathsome things is to urinate while you are standing” (ibid)
According to another Hadith (Sunan Abi Dawud #22), the Prophet peace be upon him once urinated while sitting, concealing himself with his leather shield, and so the people said, “he urinates like a woman”. But the Prophet peace be upon him answered them and explained that the purpose is to avoid being soiled, so it is better for a man to urinate while seated, and that is his Sunna. Other well known Hadith confirm the fact that it is a great sin for a person to be careless while urinating, becausing being careless will lead to his clothes becoming polluted, and the punishment of the grave is due to this pollution.
Some Muslims have sadly begun imitating the ways of the Europeans and other disbelieving nations, adapting their impure habits such as urinating while standing.
at January 31, 2019