بسم الله الرحمن الرحيم
والصلاة والسلام على محمد الامين خاتم النبيين
وعلى آله واهل بيته الطيبين الطاهرين
It has been disclosed to my heart and mind that the frequent and detailed mention of the holy prophet Moses son of Amram – peace be upon him – in the holy Quran is for the purpose of making clear the uncanny resemblance between him and the one to whom the Quran was directly revealed – Prophet Muhammad, peace be upon him and his family. So those who have been granted spiritual light are able to perceive the reality of this matter quite easily, and realize that the Mosaic narrative is the model and pattern upon which the Mohammedan prophesy and ministry is to be understood and appreciated. Our Prophet Muhammad (peace be upon him) is the second manifestation of Moses, and the holy Quran has hinted at this:

إِنَّا أَرْسَلْنَا إِلَيْكُمْ رَسُولًا شَاهِدًا عَلَيْكُمْ كَمَا أَرْسَلْنَا إِلَىٰ فِرْعَوْنَ رَسُولًا
Indeed, We have sent to you a Messenger as a witness upon you as We sent to Pharaoh a Messenger
(Surah 73:15)
And among the necessities of this resemblance is that the gifts and blessings that were bestowed upon the Mosaic dispensation should have their like bestowed upon the Mohammedan dispensation.
Keeping this in mind, let us now proceed to revisit the controversial discussion on whether or not Mirza Ghulam Ahmad, founder of the Ahmadiyyah movement, viewed himself as an actual prophet of God, or maintained until his departure from this world the orthodox position that it is Prophet Muhammad (peace be upon him) who is the last and final prophet.
This being my twelfth article in a series on this topic, I shall quote what Ghulam Ahmad of Qadian wrote in his book Tadkirat ush-Shahadatain which was published in 1903. This is significant, because it is a citation that is subsequent to the alleged change in his belief concerning the finality of prophesy that is said to have taken place in 1901 with the writing of Eik Ghalati Ka Izalah. According to the narrative which I have been refuting in this series of articles, Mirza Ghulam Ahmad claimed being a prophet in 1901 with the publication of the aforementioned text, and therefore all of his prior denials of being a prophet are moot, and it serves no purpose in citing them to establish that Ghulam Ahmad didn’t claim the office of prophesy for himself. This is the narrative that is apparently put forward by the main branch of the Ahmadiyyah movement that recognizes Mirza Mahmud Ahmad as his second caliph and the promised Reformer. It is also accepted as fact by the bitter opponents of the Ahmadiyyah movement among the bigoted and violent Mullas of Pakistan, who have appropriated to themselves the job of “defending” the doctrine of the finality of prophesy.
I have maintained that Ghulam Ahmad of Qadian did not at all modify his position on the subject of the finality of prophesy after 1901. If he had in fact done so, it would have been under divine inspiration, and he would have published a specific announcement to that effect in 1901, yet there is no historical evidence of any such announcement. Now let us examine what Ghulam Ahmad wrote in Tadkirat ush-Shahadatain:

Translation: “as the Holy Prophet, on whom be peace, was the ‘Like-of-Moses’ and his Successors are ‘the-Likes-of-the-Israelite-Prophets’, why is it then that the Promised Messiah alone is given the title of ‘Prophet’ in the traditions while the other Successors are not named as ‘Prophets’?”

This was a question posed to Mirza Ghulam Ahmad by his follower from Afghanistan, Abdul Latif of Khost, one of the two martyrs which the book Tadkirat ush-Shahadatain is regarding (Abdul Latif was stoned to death in Afghanistan in 1903 for the crime of apostasy by order of the king of that country, Habib Ullah Khan).
The tradition or Hadith that is referred to in this question is the well-known narration in Sahih Muslim where Prophet Muhammad (peace be upon him) referred to the second coming of Jesus as “Prophet of Allah” four times. In the fifth article of this series, I produced a quote from Ghulam Ahmad in which he himself explained the title ‘Prophet of Allah’ given to the second coming of Jesus as per the Hadith in Sahih Muslim as being figurative, so as not to clash with the doctrine of khatm an-Nubuwwah. But here, the question that was asked by Abdul Latif is that why has the coming Messiah alone been singled out with the title ‘Prophet of Allah’, and not any of the other caliphs and saints of this Ummah, who are meant to be the resemblance of the successors of Moses, the Israelite Prophets. Implicit in the question is the understanding of Abdul Latif that all of the caliphs and saints of the Ummah including the promised Messiah essentially have the same rank, i.e., they are all the resemblance of the Israelite Prophets who succeeded Moses, though the promised Messiah of the Mohammedan dispensation is set apart in that he alone has been named ‘Prophet of Allah’ in the Hadith. Now Ghulam Ahmad answers:

Translation: “The answer, I told him, was that the Holy Prophet was the Seal of the Prophets and that no prophet was to come after him. If all his Successors had been named as Prophets, his ‘Finality’ would have become dubious. On the other hand, if none of his ‘Successors’ was named prophet his similarity to Moses would have been jeopardised, as all the Successors of Moses were Prophets. For this reason, the divine wisdom found it prudent that many Successors be sent in accordance to the Finality of Prophesy and that they not be named prophets, and that they not be given this rank so that the Finality of Prophesy be evident. Then the last Successor, the Promised Messiah, be named prophet so that resemblance be affirmed between the two dispensations.”

In other words, according to Ghulam Ahmad, if the Prophet Muhammad’s (peace be upon him) numerous Successors had been named prophets, even in the figurative sense, there would still have been the possibility of confusion over the clear doctrine of the Finality of Prophesy. Therefore, to avoid any dangerous confusion or controversy over the matter, the Prophet’s successors were not actually named prophets, even though they are meant to be the resemblance of the successors of Moses, who were Prophets. But on the other hand, in order to maintain the resemblance between the two dispensations, it is necessary that at least one of the Prophet Muhammad’s successors be named ‘Prophet’, and that is why the second coming of Jesus has been called ‘Prophet of Allah’ in the Hadith of Sahih Muslim. Keep in mind that Mirza Ghulam Ahmad has very carefully and repeatedly written here the expression “named prophet”, because bearing the name ‘Prophet’ does not necessarily mean someone actually is a prophet. And by stating unequivocally that Prophet Muhammad (peace be upon him) is the Seal of Prophets after whom no prophet can come, it is yet another example of him affirming the orthodox Islamic doctrine after 1901. Finally, he ends his explanation of this matter by stating:

Translation: “And we have so many times explained that the prophesy of the promised Messiah is by way of Zill (reflection) because, by being the perfect projection of the holy Prophet (sall Allahu alayhi wasallam), attained spiritual emanation from the soul of the Prophet, became worthy of being called a prophet.” (Ruhani Khaza’in; v.20 p.45): 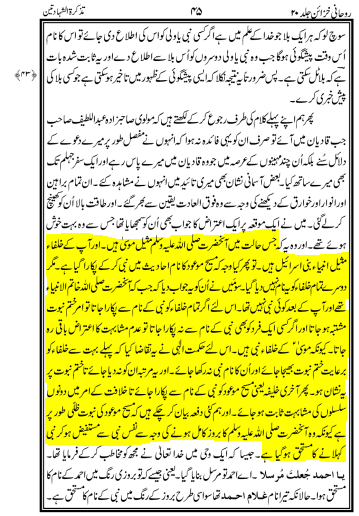 This concluding statement in answer to Abdul Latif’s question reinforces Ghulam Ahmad’s earlier, oft-repeated claim, made prior to 1901, that he is not literally a Prophet of God, but only a projection of the Prophet Muhammad’s persona through perfect and complete obedience to him, and this is known as the prophesy by way of reflection, Zilli Nubuwwat, which is distinct and not identical to actual Nubuwwah.
at July 26, 2020