بسم الله الرحمن الرحيم
اللهم صلى على محمد وآل محمد
A little over two years ago, I completed a highly impressive and successful series of articles constituting a detailed critique of ‘Allama’ Iqbal’s Islam and Ahmadism. It is a highly impressive examination and evaluation of the misguided notions and un-Islamic thinking of an individual who is, ironically, considered a great Muslim philosopher and thinker. It was this individual whose modernist and materialist thinking animated the religious and political discourse of the modern-day, so-called “Islamic” Republic of Pakistan. Today, I post the first part of a new critique, similar in spirit and theme to the aforementioned one, that shall constitute an intellectual evaluation of Sayyid Qutb’s (1906-1966) notorious manifesto entitled Ma’ālim fīt-Tarīq (Eng. Milestones or Signposts). 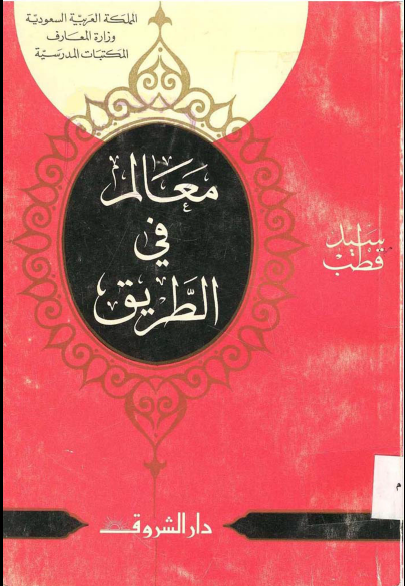 This was Qutb’s last work before his execution in 1966. Regarding this extremely controversial text, Gilles Kepel writes: “Qutb’s last work, Signposts, describes the Nasser regime in particularly severe terms, as seen from the vantage point of a man who knew only its concentration camps. The Nasserist state, Qutb argued, belongs to the Islamic category of jahiliyya, or pre-Islamic barbarism. That designation placed the regime beyond the bounds of Islam. In a simple and lucid style, Qutb presented his analysis of the regime and his recommendation of how to destroy it and replace it with an Islamic state. Although conceived on the basis of Qutb’s observation of the Nasser regime, the basic analysis of Signposts would retain its validity under Nasser’s successor as well. Signposts is therefore a major document offering a direct encounter with the ideology of the Islamicist movement. The actions of the major tendencies of that movement are implicit in the principles it presents, and ultimately it became a manifesto for most Islamicists. The religious scholars (ulema) of al-Azhar and all the various Muslim dignitaries linked to the regime have condemned this last book of Sayyid Qutb as abomination and heresy. The most traditional of the Muslim Brethren consider it a simultaneously fascinating and repellent text, some of whose assertions they consider admirable, others beyond the pale. Signposts, in other words, is the royal road to the ideology of the Islamicist movement of the seventies” (Muslim Extremism in Egypt: The Prophet and Pharaoh, pp.37-38).
With this basic background in view, let us now proceed to read Milestones. Interestingly, Sayyid Qutb begins this manifesto, this supposed blueprint for how mankind may be saved from annihilation, with a detailed criticism of Marxism. Sayyid Qutb belonged to that generation of Muslim thinkers who were now only strongly influenced by Marxism and Leninism, but were at times completely under its spell. These individuals, the “godfathers” of the so-called Islamist or political Islamic movement, did not come from a background of traditional Islamic learning, but were quite often ex-Marxists who had become disillusioned with Marxism and Leninism as a viable solution for the economic and social disparities of their Muslim homelands. Throughout the mid-20th century, certain European political ideologies and philosophies (materialism, modernism, socialism, Marxism, communism, Leninism, Stalinism, fascism, etc.) had deeply penetrated the imagination of Western educated Muslim thinkers and intellectuals. It was only natural their conception and approach to Islam was through the lens of these materialist ideologies. Now according to Qutb, revolutionary Marxism-Leninism, as embodied in the policies of the Soviet Union, is essentially refuted for its failure to produce material prosperity: “But now Marxism is defeated on the plane of thought...But now, even under these circumstances, its materialistic economic system is failing, although this was the only foundation on which its structure was based. Russia, which is the leader of the communist countries, is itself suffering from shortages of food. Although during the times of the Tsars Russia used to produce surplus food, it now has to import food from abroad and has to sell its reserves of gold for this purpose. The main reason for this is the failure of the system of collective farming, or, one can say, the failure of a system which is against human nature.” In summary, Qutb points to economic difficulties and specifically food shortage as evidence for Marxism or communism being “a system which is against human nature”. My purpose in drawing attention to this seemingly minor point is that in Qutb’s mind material prosperity and success is the scale by which various ideologies are to be weighed. It reveals his underlying materialist mode of thinking which is contrary to the teachings and principles of Religion. For Qutb, failure on the plane of thought is contingent to an ideology, when realized, being incapable of adequately addressing material, Earthly problems like food shortage. So we see here how Qutb is setting the stage for Islam to be presented as an ideology that is in the same category as materialist, political ideologies like Marxism and Leninism. We can assume, therefore, that the selling point for “Islam” as an alternative political and economic system, according to Qutb, is that once realized or implemented, material and Earthly problems of mankind shall be solved, problems like food shortage. Here I would like to raise a critical question: Is the purpose of Islam to solve mankind’s material, Earthly problems, or does it have a higher purpose of saving the human soul from damnation in the Afterlife? This is of course a rhetorical question, and the answer should be obvious to any Muslim. Next, Qutb states his thesis: “It is essential for mankind to have new leadership!” This too exposes the materialist and extremely hollow, shallow thinking of Qutb. For him, the issue is leadership, i.e., the change of leadership is what will save mankind from annihilation. Such a view is more or less in line for anyone who views mankind’s dilemma as essentially political. The tragedy with the so-called Islamist movement, particularly this Qutbist strain of it, is that for them the axis of Islam revolves around the issue of leadership. This is a highly reductionist approach to the Religion. Not only that, it has actually disfigured the Religion by putting to the side its most fundamental tenets, that are concerned with the salvation of the soul and establishing a living relationship with Allah Most High.
To be continued ان شاء الله
at August 06, 2020