Interpret the Quran in Light of Prior Scriptures

I hold it to be essential for Muslims to truly understand the holy Quran and the Prophet’s صلوات الله وسلامه عليه blessed utterances to be familiar with the Biblical narrative. There is strong indication of this in the Quran itself, for example, when Allah says:

Has there not come to them the clear evidence in what is contained in the former Books?

In answer to the challenge for a divine sign from the unbelievers, Allah says that clear evidence has already come in the prior Scriptures, meaning the heavenly texts which more or less compose the Bible.

Regarding the Torah specifically, which was revealed to Prophet Moses على نبينا وعليه الصلاة والسلام at Mount Sinai, Allah says:

Say, ‘Bring, then, the Torah and read it, if you are truthful.’

In this blessed Ayah, the Prophet Muhammad صلى الله عليه وآله وسلم is instructed to invite the people to recite the Torah. Some Muslims, especially from among the Ulama, wrongly say it is forbidden to read, let alone recite the Torah or other heavenly Scriptures. They cite a narration in which it is said the Prophet صلى الله عليه وسلم became angry when he saw sayyidina Umar al-Faruq رضى الله عنه reciting from the Torah and forbade him to do so, allegedly saying:

“By the One in Whose Hand is the soul of Muhammad! If Moses were to come and you followed him and left me you would be misguided from the Path, and if was alive during my Prophesy he would have to follow me.” (Sunan al-Darimi)

But this Hadith is weak, as mentioned by the muhaddith Zubair Ali Zai in his checking of Mishkat al-Masabih, due to the weakness of the narrator Mujalid b. Sa’id: 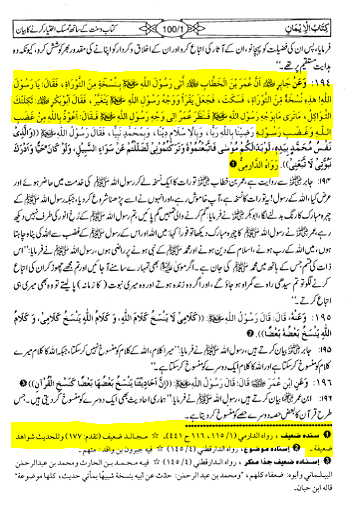 On the contrary, we have an authentic Hadith that the Prophet صلى الله عليه وسلم revered and respected a copy of the Torah scrolls that were brought before him by the Jews of Quff in their Bait al-Midras or Yeshiva. It is narrated that the Prophet صلى الله عليه وسلم was seated on a cushion, and when the Torah scrolls were brought to him, he withdrew the cushion from below him and placed the Torah upon it, saying:

And how will they make thee their judge when they have with them the Torah, wherein is Allah’s judgment?

Here it is affirmed that the Torah contains Allah’s judgment. Going back to the narration of the Prophet صلى الله عليه وسلم going to the Jews in Quff, it was to judge a matter of adultery that had been committed among them. He judged them according to the Torah, which commands the punishment of stoning for adultery:

If a man be found lying with a woman married to a husband, then they shall both of them die, the man that lay with the woman, and the woman; so shalt thou put away the evil from Israel.

Then ye shall bring them both out unto the gate of that city, and ye shall stone them with stones that they die (Deuteronomy 22)

Interestingly, many Muslims, especially our polemicists and apologists, claim that the Bible has been completely corrupted and it is futile to read or take any information from it. But they fail to answer that why then did the Prophet صلى الله عليه وسلم command the Jews to read from a scroll of the Torah they themselves wrote and brought to him in order to draw their attention to the punishment of lapidation divinely legislated within its text.

In the next Ayah, Allah goes on to say:

Surely, We sent down the Torah wherein was guidance and light. By it did the Prophets, who were obedient to Us, judge for the Jews, as did the godly people and those learned in the Law; for they were required to preserve the Book of Allah, and because they were witnesses over it

Concerning the relationship between the Torah and the Quran, Allah عز وجل says:

And before it was the Scripture of Moses to lead and as a mercy. And this is a confirming Book in an Arabic tongue to warn those who have wronged and as good tidings to the doers of good

The Quran is a Book which confirms the Torah in the Arabic language. It merely restates and reiterates the essence of the Torah through the last and final Prophet Muhammad صلى الله عليه وسلم. And the Quran affirms that the Torah is an Imam, a mercy, containing guidance, light and the command of the Lord God. So on what basis can it be said that Muslims ought to ignore it and the other heavenly Scriptures contained in the Bible? That is a false methodology. The true methodology for understanding the Quran and Sunnah better is to be familiar with the Bible. It is true that parts of the Bible have been corrupted, lost and interpolated by evil scribes, as Allah says:

Indeed, secular scholars and historians have developed a strong consensus that much of the Bible is unreliable and that there has occurred a great degree of interpolation in the text by scribes and copyists. This is especially true of the Christian New Testament. From the Islamic perspective, the solution to this dilemma is simple. Those parts of the Bible which concur with the Quran, Sunnah and Hadith, or at the very least do not explicitly contradict the holy Quran and authentic Hadith, should be accepted. Now I would like to go a step further and say that we should accept the Biblical narrative in explaining the details of things mentioned in the Quran. To illustrate, let me give the example of the account of Jonah the Prophet على نبينا وعليه الصلاة والسلام

Now according to the Book of Jonah in the Hebrew Bible: “The word of the Lord came to Jonah son of Amittai: ‘Go to the great city of Nineveh and preach against it, because its wickedness has come up before me.’ But Jonah ran away from the Lord and headed for Tarshish. He went down to Joppa, where he found a ship bound for that port. After paying the fare, he went aboard and sailed for Tarshish to flee from the Lord.” The Bible explains that Prophet Jonah fled to the laden ship (Surah 37:140) after he was called by the Lord God to go to Nineveh. However, many if not most Muslims believe the Prophet Jonah first went to Nineveh, delivered the divine warning unto her people, and then fled to the laden ship without God’s permission, expecting the great city to be destroyed and seized by a terrible wrath. This is mentioned in Ibn Kathir’s Qasas al-Anbiya for example, based on a questionable interpretation of 21:87. But if we return to an examination of the story of Prophet Jonah in the Quran in Surah 37, it clearly mentions subsequent to the narrative of Prophet Jonah running to the laden ship, drawing lots with the crew of the ship, being thrown overboard and then swallowed by the whale, then vomited out and cast ashore:

And We sent him to a hundred thousand or more

So in addition to the explicit narrative of the Book of Jonah on this matter, we have a strong inference from the Quran itself that the Prophet Jonah fled to the ship and was swallowed by the whale before he ever stepped foot in Nineveh. It is clear the Quran is speaking of Nineveh, though it isn’t explicitly named, by the fact that it is described as having a hundred thousand people or more, and the last verse of the Book of Jonah says about Nineveh: “And should I not have concern for the great city of Nineveh, in which there are more than a hundred and twenty thousand people”.

An apparent difference between the Quran and the Book of Jonah is regarding the circumstances in which the Lord God caused a plant to grow over him. According to the Book of Jonah, it was after he delivered his oracle of doom to Nineveh: “Jonah had gone out and sat down at a place east of the city. There he made himself a shelter, sat in its shade and waited to see what would happen to the city. Then the Lord God provided a leafy plant and made it grow up over Jonah to give shade for his head to ease his discomfort”. However, the Quran seems to suggest this episode occurred after Prophet Jonah was vomited out of the whale and cast upon the shore in a state of sickness, based on the sequence described in Surah 37. Now the hasty reaction of most Muslim apologists and polemicists is to simply dismiss the Biblical narrative and say without hesitation that it has been corrupted. But I am more cautious. My methodology is that the Quranic narrative should be interpreted to accord with the Biblical one since the Quran does not explicitly say that the plant was caused to grow over Prophet Jonah after he was cast ashore. The placement of the Ayah in that sequence may suggest that interpretation, but it is not necessary. There are many other instances in the Quran where the sequence of things narrated is not meant to be understood strictly in chronological order.