On Friday, January 8, 2021, the Anti-Terrorism Court in Islamabad sentenced Dr. Nasir Ahmad Sultani, self-proclaimed Mujaddid of the 15th century AH, to death, along with his co-accused, Abdul Waheed a.k.a “Allama Ayaz Nizami” and Rana Nu’man Rafaqat. A fourth co-accused in this high profile case, Professor Anwaar Ahmad, was sentenced to ten years imprisonment. These four individuals were found guilty of having committing blasphemy, which is a serious offense in Pakistan. I had the opportunity to meet all four of them, and spend extensive time in their company, during my incarceration at Adiala Jail from November 2019 to April 2020. Like them, I was charged with a blasphemy offense, though of a considerable lesser degree of severity (295-A and 298-C) that I was, by the grace of Allah, able to secure bail from the Punjab High Court after five months of imprisonment, and subsequently returned to my country of birth and citizenship, Canada.

Dr. Sultani is fond of his title “doctor” although in reality he isn’t a licensed medical doctor but a practitioner of homeopathy. In this photograph, note that Nasir Sultani is prominently displaying a stethoscope around his neck, giving the false impression that he is a certified medical doctor: 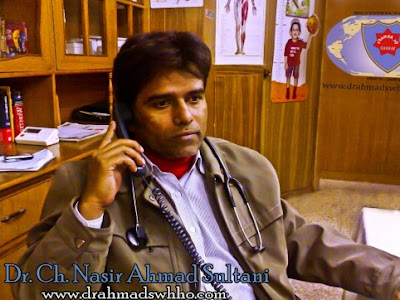 This is noteworthy because one should consider that if someone is a recipient of divine revelation, and the Mujaddid appointed by Allah of this age, then there should be no element of deception or history of such in his person.

When I first met, in person, Dr. Sultani at Adiala Jail, I was taken aback by his extreme shortness. I estimate his height to be somewhere between 5 feet to 5 feet and two inches. I believe that because of his physical appearance, or more accurately, the lack thereof, Dr. Sultani has suffered from an inferiority complex all his life, and this seems to be the main psychological motivation for his making of grandiose claims about himself beginning in 2011.

Although he never stated this to me personally, despite our extensive face to face conversations, I have come to learn that Dr. Sultani had claimed that one of his daughters is comparable in rank to the Prophet’s beloved daughter, the lady of Heaven, sayyida Fatima az-Zahra سلام الله عليها (God forbid!), and this was apparently a huge factor in the verdict of guilt against him.

Though I have already written in depth regarding Dr. Sultani and why I believe he is a false prophet, either delusional or an outright liar, the reason I have decided to dedicate another post to him on my blog in light of the recent death sentence passed against him is that this individual who emphasize not only to me, but to his other fellow inmates in jail, that God had given him the glad tidings that he would soon be released from custody. Now it has been nearly four years since Nasir Sultani was put behind bars at Adiala Jail, and whatever dim light there was for his release appears to have been completely extinguished with this damning verdict. Whether I agree or disagree with the verdict is another matter, I’ve already explained that in principle I don’t find the concept of a worldly, legislated punishment for blasphemy in the Shari’ah of Islam, nor any prescribed legal penalty for a false claimant of prophesy. Nevertheless, it is clear to me that Allah Most High is not on Dr. Sultani’s side, and that he is suffering this unenviable fate, this bitter disgrace, because he continues to lie upon God with such ridiculous claims. Though it is quite possible that Dr. Sultani will get some relief from the High Court or the Supreme Court eventually, for now there is little doubt he will remain a prisoner in Adiala Jail for a considerable length of time.

I must confess that during my initial encounter with Dr. Sultani I was somewhat impressed and drawn to him. When he told me matter-of-factly that Allah speaks to him regularly, and even shared some of his revelations with me, I believed him. It is my habit to believe what someone says, especially if he is a Muslim, unless I have a compelling reason not to. This is especially true of those who claim they have received a divine inspiration or seen a vision from God, for I consider this phenomenon to be a sign that Islam is a living religion.