A little over two years ago I published a piece on this blog arguing that the Twelfth Imam of the Ithna Ashari Shi’ah sect is a fictional character for whom there is no solid historical evidence of existence. This is extremely problematic for the Twelvers given that belief in this twelfth Imam is one of the most fundamental doctrines of their sect. In fact, it is their defining feature which differentiates them from the other sects of the Shi’ah and the Imamiyah. Just to recap, the arguments I put forward in that article were:

In this second part I shall elaborate further on each of these three points, and also present some additional arguments which cast serious doubt on the existence of the Twelfth Imam.

As for the factions that emerged at the death of the Eleventh Imam – Hasan al-Zaki – al-Nawbakhti, himself a Twelver, has described them in some detail. He writes that the community split into fourteen distinct groups, but only writes concerning thirteen of them: 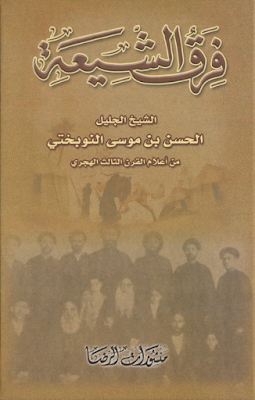 1. A group which denied a son being born to the Eleventh Imam. They believed there must always be a living Imam in the world, and so denied the death of the Eleventh Imam, instead saying that the Eleventh Imam is the one who went into occultation and that he is the awaited Mahdi. 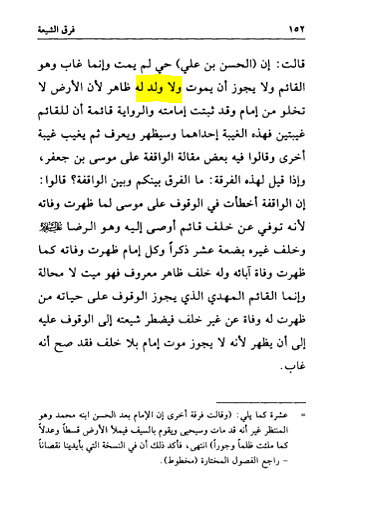 2. A group, like the previous one, denied a son for the Eleventh Imam. They also agreed with the first group that there must always be a living Imam in the world, but they acknowledged that the Eleventh Imam died. They resolved this problem by believing the Eleventh Imam was raised back to life shortly after his death, went into occultation, and that he is the Mahdi, in keeping with a linguistic interpretation of the title al-Qa’im which means “the one who is resurrected”. 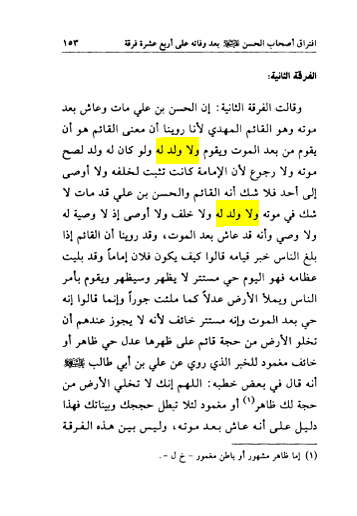 3. A group, like the previous two, which denied a son for the Eleventh Imam. But they acknowledged the death of the Eleventh Imam but said he designated his younger brother Ja’far his successor. 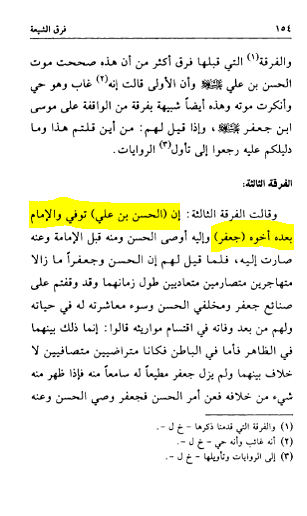 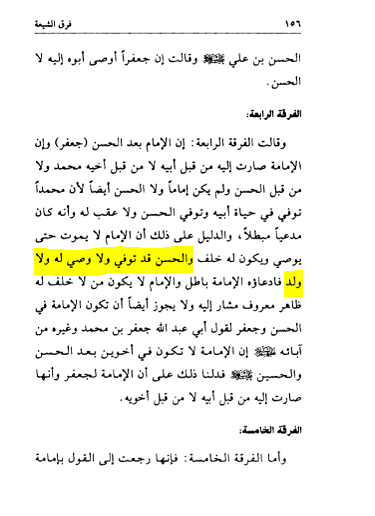 5. Like the previous four groups, this group also denied a son being born to Hasan al-Askari. They believe that the Tenth Imam – Ali al-Naqi – designated his eldest son Muhammad to succeed him as the Eleventh Imam, although he apparently died in his father’s lifetime. It therefore seems that they denied the death of this Muhammad, and that they believe he is the Mahdi. 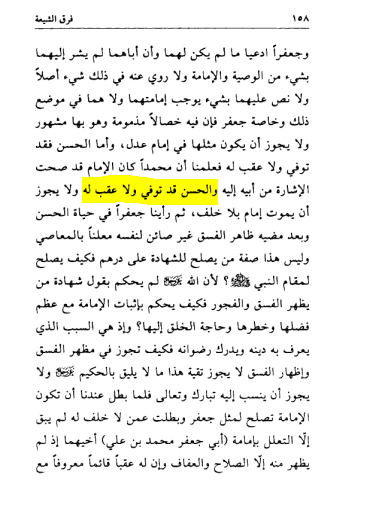 6. This is the first of the groups so far which believe the Eleventh Imam had a son, who was named Muhammad, whom his father declared his successor. They believe he was born several years before his father’s death, and that he went into occultation. 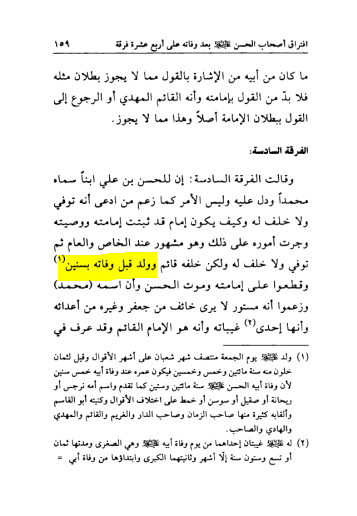 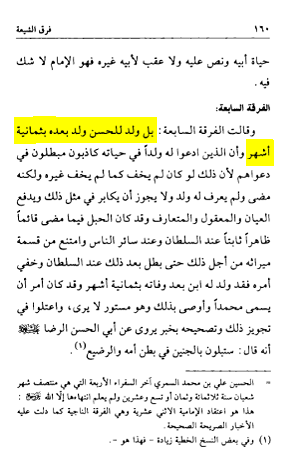 8. This is the sixth group which denies the Eleventh Imam had a son, because of the lack of evidence for such a claim. Nawbakhti gives no further details about this group. 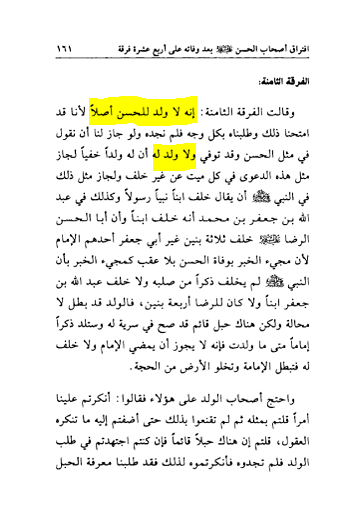 9. This is the seventh group which denies the Eleventh Imam had a son. They believe the Eleventh Imam died and the Imamate has therefore ceased as a living institution. But they believe, if Allah wills, He will send the Mahdi sometime in the future who will be from the family of the Prophet. 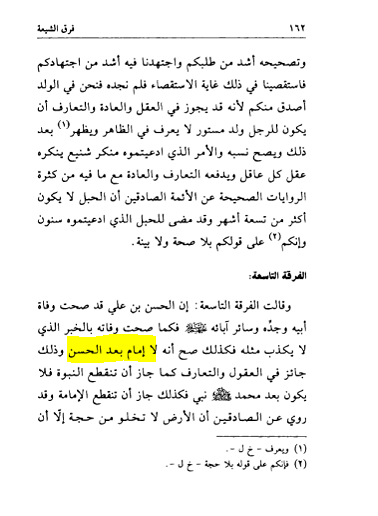 10. This is the eighth group which denies the Eleventh Imam – Hasan bin Ali al-Naqi – had a son. They say that the Tenth Imam designated his son Muhammad his successor, though he died in his father’s lifetime. But while he was alive, this Muhammad intended that his younger brother Ja’far should succeed him. This was disclosed to a servant of the Tenth Imam named Nafis, who announced and supported the Imamate of Ja’far after Hasan al-Askari died. This sect has an actual name, the Nafisiyyah. They believe Ja’far bin Ali is the Qa’im, the Mahdi, and say he is the most superior person after the Prophet himself. 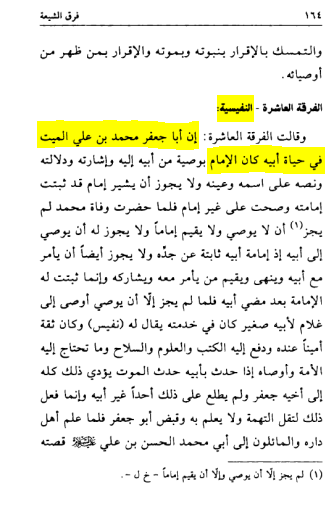 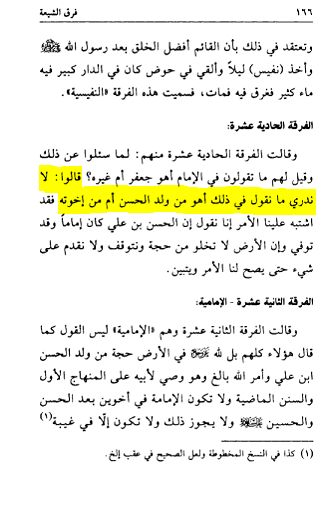 12. This is the group which Nawbakhti identifies as his Twelvers – the Ithna Asharis that persist till this day. 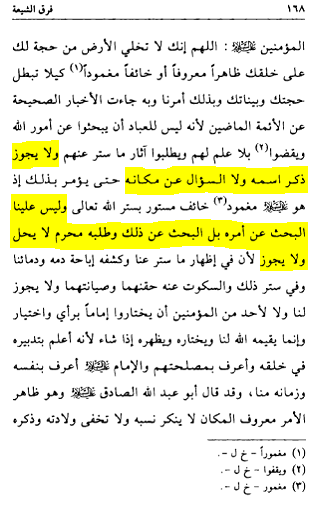 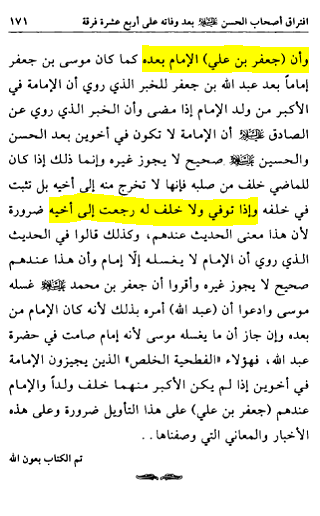 From our Sunni sources, the heresiographer, Ibn Abd al-Karim al-Shahrastani, likewise mentions the splitting of the followers of the Eleventh Imam after his death, and describes eleven such groups, which mostly correspond to Nawbakhti’s list:

Then there are a few factions which were unsure on the question of a son being born to the Eleventh Imam. Based on this, we cannot help but conclude that the idea of the Eleventh Imam having a son is a myth, otherwise there wouldn’t have been so many factions, independent of each other, from among his original followers who would deny it. And those factions which do claim he had a son have contradictory accounts, some say he was born several years before his father died, while others say he was born eight months after his father died.

The second pillar of my argument is the confusion over the identity of the Twelfth Imam’s alleged mother. There are at least eight different names that have been narrated in Twelver literature for the concubine of the Eleventh Imam who bore him a son: Narjis, Sawsan, Saqīl, Rayhāna, Malīka, Hukayma, Maryam, Khumt. Though some Twelver apologists suggest these are all different names of the same woman, their narrations invalidate this argument. Some suggest the concubine was a Roman princess, the granddaughter of one of the Caesars, and also a descendant of Jesus’s chief disciple, Simeon Peter, while others say she was a black woman, a Nubian from the northern region of Sudan.