Among the more serious deviations of the Deobandi sect is its assertion that the Prophets of Allah are alive in this world with a bodily/physical life. Upon closer inspection of the Deobandi doctrine in this regard it becomes plain for all to see that the Deobandis understand the Hadith “The Prophets are alive in their graves, praying” with such rigid literalism as to disturb anyone with a sound intellect. They essentially imagine that the Prophets are living, breathing and moving within the physical confines of their earthen graves. If the grave of a Prophet were to be accidentally opened one would behold, according to this belief, a living, breathing and moving Prophet like any other living person in this world!


The Prophet is closer to the Believers than their own selves, and his wives are their mothers. (Surah 33:6)


It is not allowed for you that you hurt Allah᾿s Messenger, nor that you ever marry his wives after him. Indeed, it would be an enormity in the sight of Allah. (Surah 33:53)


Incidentally, the preceeding Verse of the Holy Qur᾿an shows that the phrase Mim Ba᾿dihi (after him) means nothing but death, and is comparable to the Verse where the Messiah Jesus (peace be upon him) is quoted as saying:


In other words, the Messiah Jesus (peace be upon him) gave the children of Israel the glad tidings that a Messenger named Ahmad would appear after him, meaning after his death [proving that Prophet Jesus of Nazareth died long ago and is no longer alive].


The founder of the Deobandi sect, Qasim Nanotvi, wrote a very intricate book Aab-i-Hayat (lit. “Water of Life”) in which he employed all manner of sophistry to justify the above mentioned heretical belief. However, the Deobandi mulla was forced to confess that the early scholars of Islam differed from him and his sect on this point. Qasim Nanotvi writes:


Translation: “The ancient Ulama [Islamic scholars] held that the prohibition of marrying the pure wives [of the Prophet] was on the basis of their being mothers [of the believers]. They did not understand it as being the result of the Prophet being alive.” 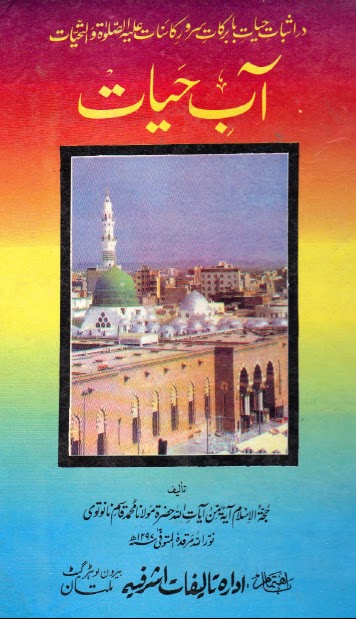 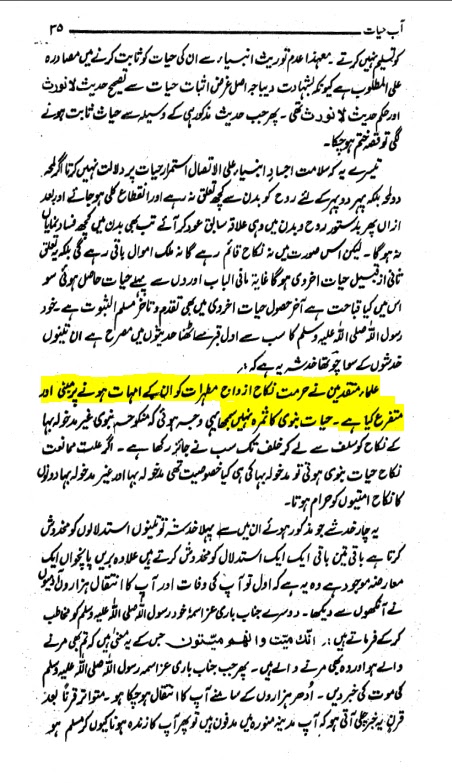