The heresy known as Sima᾿ al-Mawtaa (that the dead are able to hear things from this world) is the foundation upon which the Shirk and grave–worship that has infected this Ummah like a virus is built upon. In no less than five distinct passages of the Pure and Holy Qur᾿an does Almighty Allah Most High repudiate this idea that the dead can hear. He says:


And those whom you invoke besides Him [Allah] do not even own the membrane on a date-stone...


If you invoke them they cannot hear your invocation. And if they were to hear you they would still be unable to answer you. And on the Day of Resurrection they will reject your Shirk. And no one can inform as He Who is aware. [Surah 35:13-14]


*This verse of the Holy Qur᾿an gives no opportunity to dissent for those who believe the dead can hear. Allah says that the ones who are invoked apart from him cannot hear, and if hypothetically they could hear they would still be unable to answer the supplications of the polytheists. Furthermore, the identity of “those who are invoked” becomes apparent when Allah adds that on the Day of Resurrection they will reject the Shirk that their so called devotees indulged in. It can be none other than the pious people who are deceased that is meant by this passage, because it is not the idols or imaginary gods that shall be resurrected on Judgment Day but the people who are buried in the graves.


And who is more astray than the one who invokes, besides Allah, one who cannot answer him till the Day of Resurrection, and is, concerning his invocation, utterly unconscious. (Surah 46:5)


This verse reinforces the fact that the dead cannot hear. Here again the mention of the “Day of Resurrection” makes it apparent that the deceased are meant specifically, so as to leave no room for maneuver for those astray sects who believe the dead can hear.


Verily, you (O Prophet) cannot make the dead to hear, nor can you make the deaf to hear the call when they turn their backs in retreat (Surah 27:80 and 30:52)


Another strong proof from the Holy Qur᾿an that the dead cannot hear, just like the deaf cannot hear. It is often argued that in this passage the “dead” refer to those who are spiritually dead meaning the disbelievers. They are called to submit to Allah but they are unable to hear. While the context of this verse does indeed lend credence to this argument, the fact remains that whether physically dead or metaphorically dead, Allah negates the possibility of either having the capacity to hear. Otherwise it would be pointless for the disbelievers to be compared to the dead if the actual dead have the capacity to hear. The whole point of the parable would be nullified. Furthermore, Allah says that the deaf cannot hear when they turn their backs and retreat. This is something that is obvious and no sane individual would dispute. Hence the comparison of the disbelievers with the dead and the deaf in the sense of not being able to hear proves that the actual dead, like the deaf, are unable to hear at all.


And nor are the the living and the dead alike. Verily, Allah can make whosoever He wishes to hear. But you (O Prophet) cannot make to hear those who are in the graves. (Surah 35:22)


This verse specifically mentions “those who are in the graves”, against making it more than apparent that the actual deceased cannot hear, and not just the carved idols and images, because idols and images that are worshiped besides Allah are not buried in graves. Being buried in a grave is specific to human beings.


The Deobandi sect, particularly the Hayati camp (who believe the Prophet صلى الله عليه وآله وسلم is literally alive in this world and can hear directly from his grave) quote a fabricated Hadith to support their view:


As already mentioned, this Hadith is fabricated. Its sanad includes the narrator Al-᾿Alaa᾿ b. Amr al-Hanafi, a known liar and fabricator. Though it is quite revealing of the deceptive nature of the Deobandis that they cite as evidence for their heresy a fabricated Hadith which opposes several verses of the Holy Qur᾿an.


The Jama᾿at-ut-Tabligh, or Tablighi Jama᾿at is the missionary wing of the Deobandi movement. It misguides millions of Muslims around the world and indoctrinates them with Deobandi heresies. The Tablighi Jama᾿at and Deobandis avidly read the series of booklets known as Fada᾿il-i-A᾿mal composed by Zakariyah Kandhelwi (1898-1982). One of those booklets is called Fada᾿il-i-Durud and contains the following quote describing the belief of the Deobandi sect: 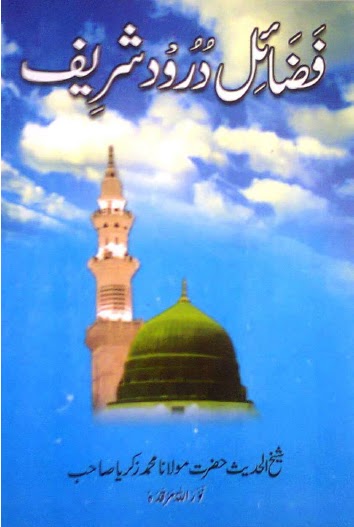 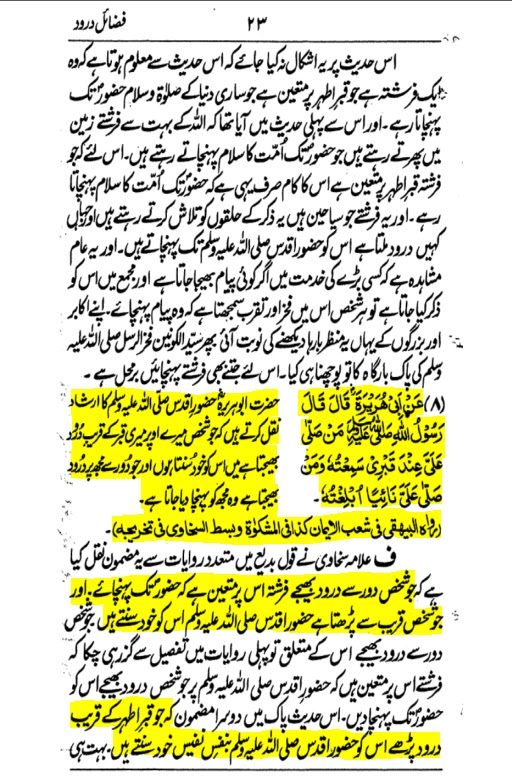