In the Name of Allah; the Entirely Merciful, the Especially Merciful


Peace and blessings be upon our beloved master Prophet Muhammad.


Indeed, We have sent you a Messenger as a witness upon you just as We sent to Pharaoh a Messenger


The resemblance between the Prophets Moses and Muhammad (peace be upon them both) is uncanny. Both are law-giving Prophets who gave spiritual life to a nation. Both triumphed in their cause despite unsurmountable odds. Prophet Moses led his people out of Egypt into the promised Holy Land, and likewise, Prophet Muhammad emigrated with his early followers from Mecca to Medina where the archetype Islamic society was established. Both Prophets engaged in battle with the help of God against idol-worshiping pagans and were triumphant. It is for this reason that Prophet Moses prophesied:


“I will raise them up a Prophet from among their brethren, like unto thee, and will put my words in his mouth; and he shall speak unto them all that I shall command him. And it shall come to pass, that whosoever will not hearken unto my words which he shall speak in my name, I will require it of him.” (Deuteronomy 18:18-19)


The Hebrew word אֲחֵיהֶ֖ם (“their brothers”) has the pronoun “hem” in the plural referring to the nation of Israel, meaning that the promised Prophet will not himself be an Israelite, but shall be raised up from among a brother nation which is closely-related to Israel, i.e., the Ishmaelites (Arabs), who are referred to as Israel’s brethren (Genesis 25:18).


The prophecy in Deuteronomy states that this Prophet shall speak the Words of God from his mouth. The Holy Qur’an is believed by Muslims to be the literal Words of God. Even Jews and Christians do not believe that their Bible is literally the Word of God, but only its meaning is inspired by God, while the words penned down are from the scribe. Furthermore, the prophecy warns the Israelites that they cannot escape having to render an account before God if they fail to hearken to the words which the promised Prophet (Muhammad) will speak in God’s Name.


Christians contend that the Prophet spoken of in Deuteronomy chapter 18 is Jesus Christ. However, since Jesus was an Israelite, if the prophecy was referring to him, it would have said: “I will raise them up a Prophet from amongst them” or “from among themselves”, and not “from among their brethren”.


Furthermore, the New Testament itself clarifies the fact that the promised Prophet of Deuteronomy 18 and the Davidic Messiah are two distinct individuals. According to John’s Gospel, the learned Jewish priests and Levites came to test John the Baptist:


“And this is the record of John, when the Jews sent priests and Levites from Jerusalem to ask him, Who art thou? And he confessed, and denied not; but confessed, I am not the Christ. And they asked him, What then? Art thou Elias? And he saith, I am not. Art thou that prophet? And he answered, No.” (John 1:19-21)


It should be obvious to the reader that when John the Baptist already denied being the Messiah (or “Christ”), and if the Messiah is synonymous with the Deuteronomic Prophet, it would be redundant for the Jewish priests and Levites to ask him “Art thou that prophet?”


This passage reveals that the Jews were expecting three particular individuals; 1. The Christ, 2. Elias, and 3. “that Prophet”. Since Deuteronomy 18 is the only place in the Bible which predicts the coming of a specific Prophet, we come to realize that until the time of John the Baptist the Jews did not consider that Prophet as having already appeared. The book of Deuteronomy itself says: “And there arose not a prophet since in Israel like unto Moses” (Deuteronomy 34:10)


Now John the Baptist clearly denied being the Deuteronomic Prophet, and Jesus claimed to be the Messiah, whom we have already demonstrated is distinct from the Prophet whose advent was prophesied by Moses. It is only Prophet Muhammad (peace be upon him) who fits the criteria for the Deuteronomic Prophet, and this is why the Holy Qur’an makes the claim on his behalf that he is like the Messenger that was sent to Pharaoh, i.e, Moses (Sura 73:15), and furthermore states:


Those who follow the Messenger, the Unlettered Prophet, whom they find written in what they have of the Torah and the Gospel (7:157)


The apocryphal text The Assumption of Moses gives additional details which remarkably point to no one else apart from the Prophet Muhammad (peace be upon him):


“For the Most High will arise, the Eternal God alone. And He will appear to punish the Gentiles, and He will destroy all their idols…And do thou, Joshua (the son of) Nun, keep these words and this book; For from my death – (my) assumption – until His advent there will be CCL times.” 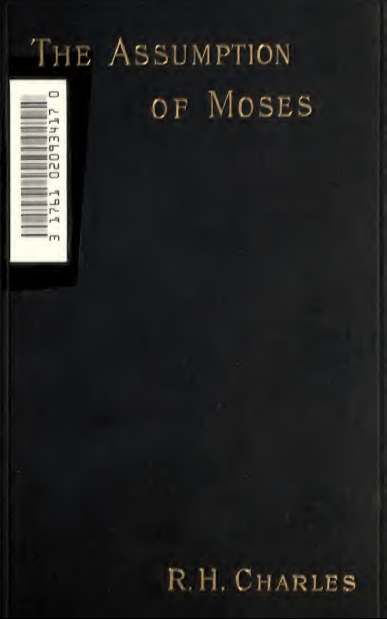 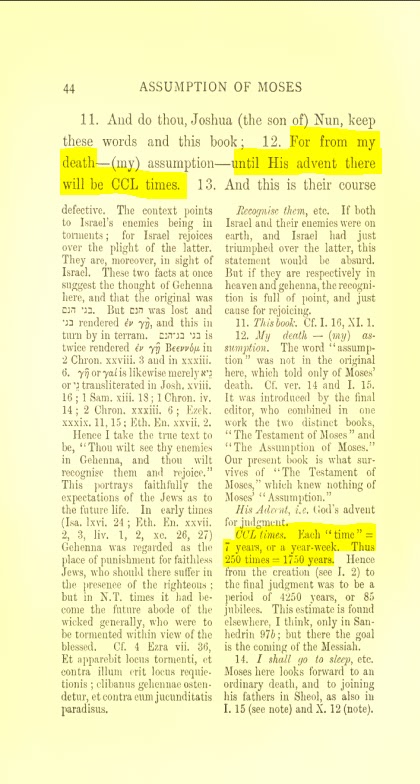 Punishing the Gentiles and destroying their idols is indeed an uncanny description of the Prophet Muhammad (peace be upon him), the archetype idol-breaker and iconoclast. However, the prediction that the duration between Moses’s death and his advent of CCL times points directly to Prophet Muhammad (peace be upon him). CCL is the Roman numeral for 250, whereas a “time” is equivalent to 7 years. Hence 250 x 7 = 1750 years.


It is generally believed that the Exodus of the Israelites from Egypt occurred toward the end of the 13th century before the common era, incidentally around the time when Ramasses II was Pharaoh, who died around 1224 BCE. The Israelites were lost in the wilderness for approximately 40 years until they found the promised Land, around which time Moses died, circa 1180 BCE. Exactly 1,750 years later the Prophet Muhammad (peace be upon him) was born in the year 570 CE.
at January 16, 2017