One of the tragic consequences of the impact of modernism and European colonialism upon the Muslim world is the radical change in dress, specifically, the adapting of European style of dress by Muslim men. Modernists claim that Islam is altogether unconcerned with mode of dress. Today a growing number of Ulama likewise claim that so long as a mode of dress covers one’s nakedness there is no problem in adapting it, and that Islam even prefers that people adapt the style of dress in the societies in which they live. Ironically, these very scholars and intellectuals who claim that Muslims living in Europe and America should adapt Western fashion as a matter of principle are suspiciously silent about the massive trend of Muslims living in the Middle East, Africa and Asia adapting European dress which is altogether foreign to their regions. It is an example of the kind of toxic Eurocentrism that has infected the minds of the Muslims, the sign of an unhealthy inferiority complex and distance from Islam and the Sunna. With regard to Muslim women, it is an altogether different issue because Islam enjoins strict veiling of women and so the question of Muslim women adapting European dress, which is inherently insufficient in concealing a woman’s nakedness according to the standards of Shari’a, does not even arise. Therefore, I shall restrict myself to discussing the issue of Muslim men in adapting modern European dress. Admittedly, European dress does, generally speaking, conceal the nakedness of the male according to the standards of the Shari’a, though there are specific articles of clothing that do not, such as shorts that leave the thighs and knees exposed, and are therefore strictly forbidden.
The issue of resembling the disbelievers requires explanation. The principle of the Shari’a which forbids Muslims to resemble the manners of the disbelievers is concerning the customs and practices of the disbelievers that are done as a religious significance for them. A Muslim cannot wear the style of robes of a Buddhist monk, a Sikh turban, Hindu tilak, Jewish kippah and phylacteries, a Christian crucifix and clerical collar, etc. But since European style of dress has no religious significance, it cannot be forbidden on the basis that it is resembling the disbelievers. Nevertheless, I would say that Muslim men are strongly discouraged from adapting European dress for a numbers of reasons. Firstly, it is a style of dress that is associated with irreligiosity. Since its introduction to the Muslim world, it was rejected by the Muslim sages, scholars and men of piety, while adapted by the sinful and libertine modernists. Secondly, European dress is not designed to accommodate an Islamic lifestyle of worship that entails regular acts of bowing, prostration and sitting on the ground. European dress is intrinsically tighter fitting than the kind of dress that Muslims have traditionally worn, which tends to be loose fitting and flowing.
The idea of modernists and some Ulama that Islam is not concerned with mode of dress is absolutely false. One of the principles of Islam is that Muslims ought to emulate the Sunna of the Prophet Muhammad (peace be upon him & his family). Now it is true that there were some aspects of the Prophet’s (peace be upon him & his family) manners which were done purely out of conformity with Arab culture and the customs of his time and place. Yet emulation of even this, if done with the intention of love and attachment to the Prophet, would entail virtue and goodness from the perspective of Islam. However, my point is that Muslim men adapting certain mode of dress that was beloved to the Prophet, and which he adapted out of preference and not merely out of conformity with his culture, constitutes a Sunna, the abandoning of which constitutes, at the very least, an act that is discouraged by Islam. Here I am referring to the beloved Sunna of wearing of the Qamis and the Hibara. Anas b. MalikRA narrated that the most beloved garment to the Prophet (peace be upon him) was the Hibara (Sahih al-Bukhari). Hibara was a kind of cloak, reddish in color but striped, that was manufactured in Yemen. 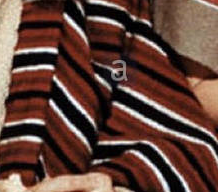