And not is Muhammad except an Apostle. The Apostles from before him passed away [died]


The context, background and grammatical structure of this verse all establish the death of all of the Apostles that came before Prophet Muhammad (sall Allahu alayhi wasallam), including Jesus Christ. I discussed this at length in a previous entry, especially the implications of the words qad khalat. The appearance of the verb khalaa which primarily means “to become of the past”, being used in relation to human persons (the Apostles), is certainly meant to signify their deaths. In this entry, I shall quote some of the classical tafasir to further prove the understanding of the exegetes that the application of the words qad khalat in relation to the Apostles signifies their respective deaths: The great exegete, Imam Ibn Jarir al-Tabari, comments on the Ayah (3:144):
يعنـي تعالـى ذكره بذلك وما مـحمد إلا رسول كبعض رسل الله الذين أرسلهم إلـى خـلقه داعياً إلـى الله وإلـى طاعته، الذين حين انقضت آجالهم ماتوا وقبضهم الله إلـيه يقول. جلّ ثناؤه فمـحمد صلى الله عليه وسلم إنـما هو فـيـما الله به صانع من قبضه إلـيه عند انقضاء مدة أجله كسائر مدة رسله إلـى خـلقه الذين مضوا قبله وماتوا عند انقضاء مدة آجالهم
“Muhammad is not but an Apostle, like some of the Apostles whom Allah sent to His creation as a caller unto Allah and unto His obedience, and who, when their terms passed, all died and Allah took them unto Himself. Allah glorified is He says: So Muhammad – sall Allahu alayhi wasallam – will also be taken by Allah after the expiry of his term like how the other Apostles in the past from before him died when their terms expired.” (Tafsir Ibn Jarir v.6 pp.96-97): 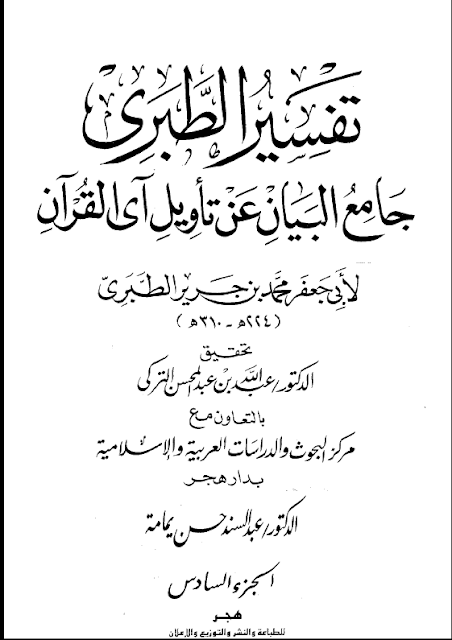 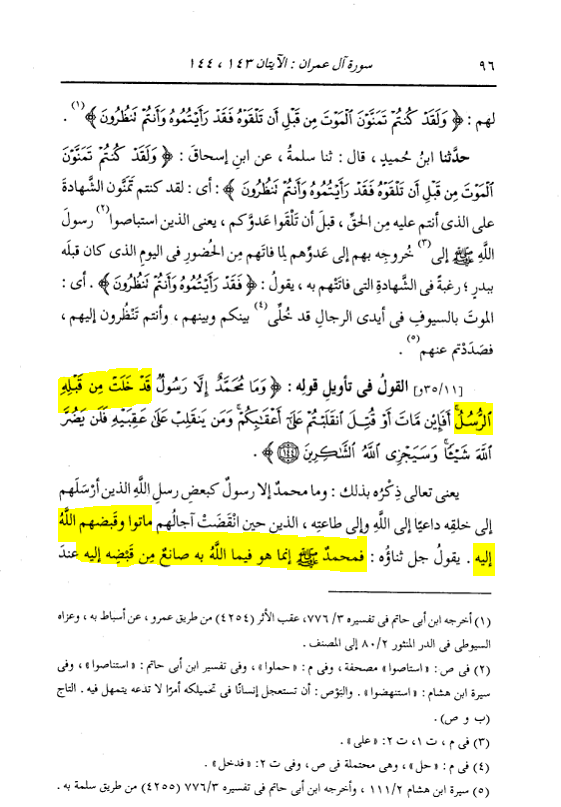 Note here that Imam Ibn Jarir al-Tabari (rahimahullah) has understood this Ayah as a comparison between the specific Apostle Muhammad (sall Allahu alayhi wasallam) with those Apostles who preceded him with respect to how they pass away, and clearly writes “maatoo” (they died). Al-Zamakhshari comments:
والمعنى { وَمَا مُحَمَّدٌ إِلاَّ رَسُولٌ قَدْ خَلَتْ مِن قَبْلِهِ ٱلرُّسُلُ } فسيخلو كما خلوا، وكما أن أتباعهم بقوا متمسكين بدينهم بعد خلوهم، فعليكم أن تتمسكوا بدينه بعد خلوه
“The meaning of: And Muhammad is not but an Apostle, the Apostles from before him passed away. So he too will pass away as they all passed away, and as those who followed them clung to their Religion after their passing away, so upon you is to cling to his Religion after his passing away.” (Tafsir al-Kashshaf p.198): 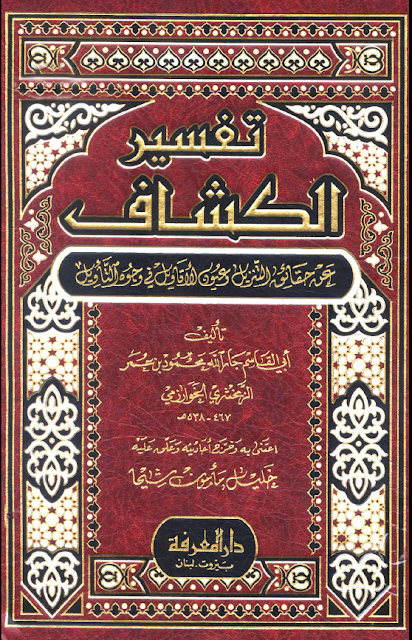 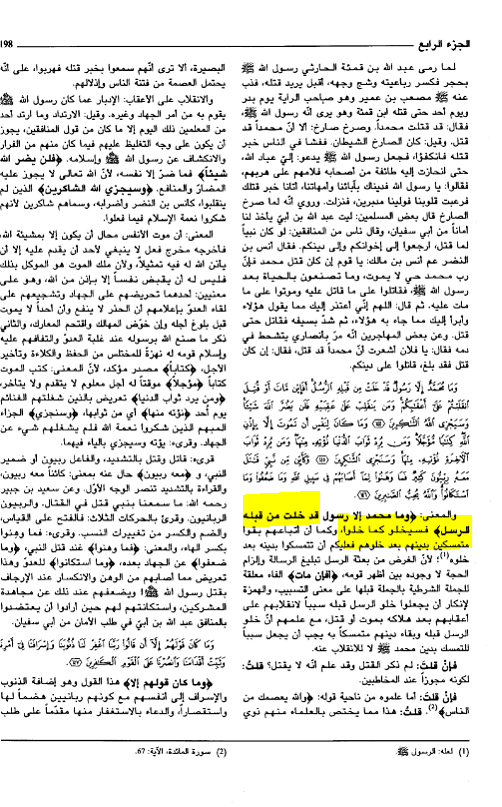 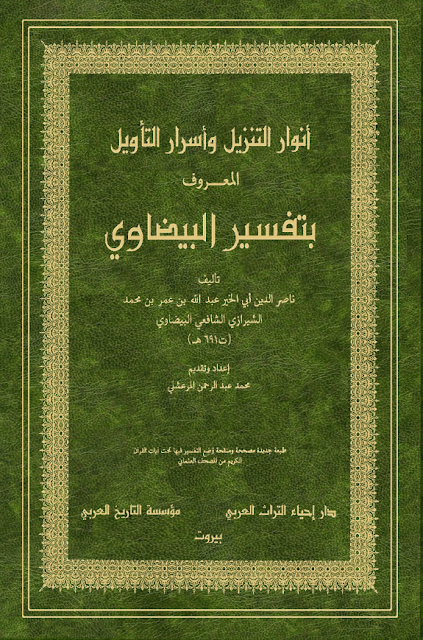 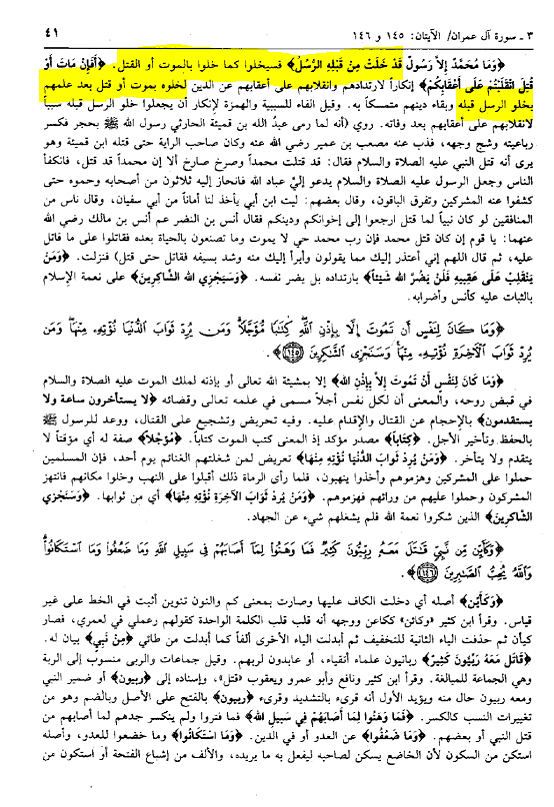 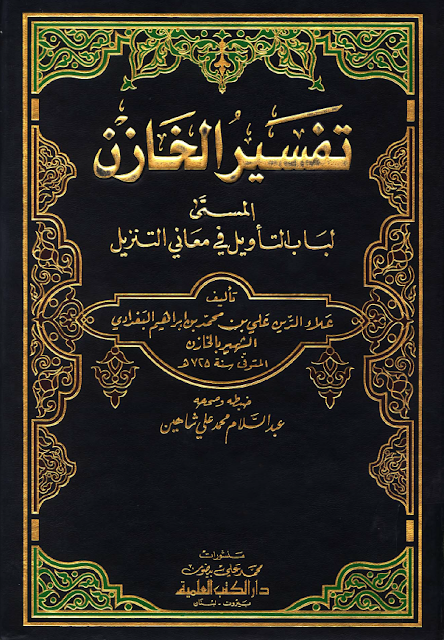 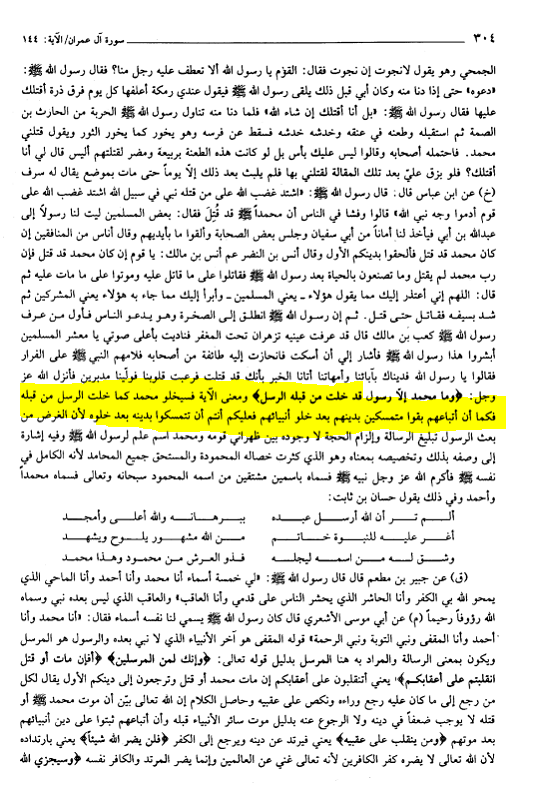 All of these and many other commentaries on the Ayah clearly establish the fact that a comparison is being made between the Prophet’s passing away and the passing away of all the Apostles who preceded him, i.e., the passing away of death. As for the argument that the verb khalaa does not necessarily imply death, I have already refuted that argument with regard to the context, background and purpose of this Ayah. It is true that the meaning of the verb varies depending on its usage, context and other factors. Those who argue that Jesus of Nazareth didn’t die cite other verses where the verb khalaa has been used but obviously doesn’t mean death, failing to take into consideration the altogether different context and background of those verses when contrasted to this verse (3:144). Here I shall examine some of those crucial differences:


Situations passed from before you


Here the word sunan is used, variously translated to mean “situations”, “ways”, “systems”, etc. It is argued that the verb khalaa here obviously doesn’t mean death, so how can it mean death in the other verse (3:144)? However, the difference is that in 3:144 the subject are human persons, the Apostles, while in this verse (3:137), the subject are not persons. As the Arabic linguist Ibn al-A’rabi I quoted in the previous entry stated, the verb khalaa is used to signify death when it is in relation to a person (or persons)! This difference is observed in most other languages too. For example, if I say “my father has passed away”, the ordinary and apparent meaning is that he has died, whereas if I say “the clouds have passed away”, there is a different meaning. Although the same verb is being used in both instances, in the first instance the subject is a human and in the second instance the subject are inanimate objects.


When they are alone with their satans, they say, “indeed, we are with you”


Now here it is argued that the verb khalaa has been used, and this time the subject are humans, yet the meaning is obviously not death. However, the meaning of the verb is modified with a preposition and genitive noun (jaar and majroor) ilaa shayaateenihim “to their devils”. In the Ayah (3:144) there is also a preposition and genitive noun, min qablihi, but in that case the purpose is only to define and identify the subject and not to modify the meaning of the verb.


When they are alone they bite [their] fingertips at you


When they meet you they say, “We believe”


So there is a natural contrast between the subject meeting or being with the addressees and the subject being alone or in seclusion, away from the addressees. Furthermore, the subject’s act of biting their fingers also clarifies the reality of the verb khalaa as used in this instance. To summarize, context is key to understanding the meaning of the verb khalaa as it is appears in these different verses. Consider also this verse:


This was a community which has passed away [died]


The umma spoken of in this Verse is a reference to the individuals mentioned in the preceding verse, namely, Abraham, Ishmael, Isaac, Jacob and his sons:
{ تِلْكَ } مبتدأ والإشارة إلى إبراهيم ويعقوب وبنيهما وأُنِّث لتأنيث خبره { أُمَّةٌ قَدْ خَلَتْ } سلفت
“That tilka is the subject of this sentence and denotes Abraham Jacob and his sons and is feminine because it agrees with the gender of its predicate is a community that has passed away has gone before” (Tafsir al-Jalalayn)
at August 23, 2018