The plain meaning of this Qur’anic passage is that Allah Most High has created the soul and inspired within it its conscience through which it is able to make a basic distinction between good and evil. Hence this is the true and orthodox Islamic philosophy regarding the human condition, i.e., that the human is granted by his Maker an innate knowledge of good and evil.
But the wayward Ghulam Ahmad Parwez, who re-interpreted the Qur’an to be in accordance with his modernist, materialist and naturalist thoughts, not only denied the orthodox Islamic conception of the human condition derived from this Ayah (91:8), he had the audacity to grossly distort its meaning. According to Parwez:
نیکی اور بدی کی تمیز انسان کے اندر ہنیں
“The view that the power to discrimate between right and wrong is inherent in man finds no support in the Qur’an. The verse (91:8) which is very often quoted in this connection has been misunderstood. It does not refer to any such discriminating quality of ‘human nature’. For if man possessed the capability of judging good from the bad, and thus distinguishing between the right and wrong without the help of Divine guidance, the institution of nubuwwah would lose its significance. Why then should God have raised Anbiya from among men and entrusted to them the task of directing His people on the right path? Again, if the power to distinguish between right and wrong were inherent in the nature of man the whole of mankind, from its beginning to this day, would have been following one and the same moral code; but, as already stated, there are no universally accepted moral standards. Each group has its own ethical code, and what is more, this code has also changed with the passage of time. The verse cited above does not, therefore, mean that ‘human nature’ - or man’s conscience - is qualified to know of its own right from wrong, or has within it the power to discriminate between Khair and sharr. The words in the verse referred to above, (i.e. 91:8) on the contrary are the statement of a fact, the fact of man’s potentialities for becoming good or bad, as he decides for himself. Since the human personality (or self) is given in an undeveloped form, there are, the verse says, equal possibilities of his attaining the highest good, or wasting himself in wrong doing. The correct translation of the verse is: ‘Human self has been endowed with the capability of both integrating itself or corrupting it.’” (Islam Kia Hey? p.42): 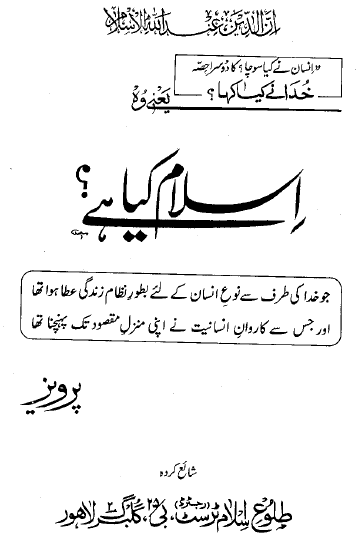 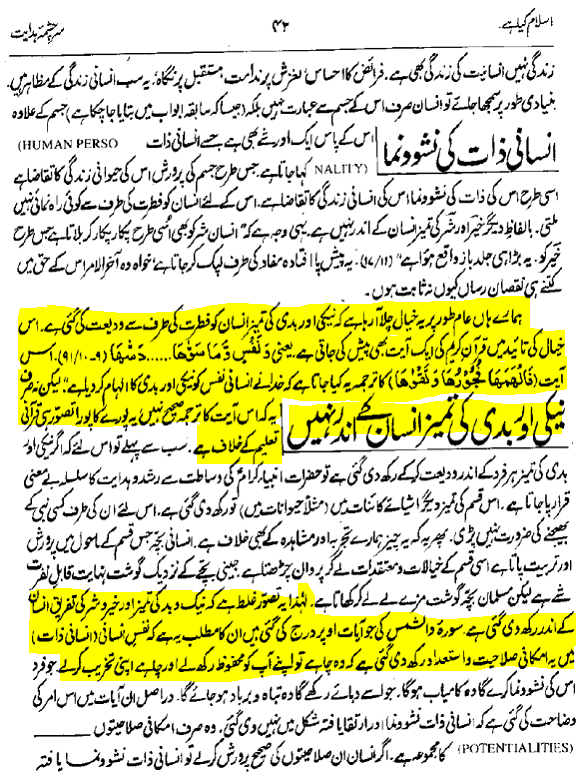 The objections and arguments put forward by G. A. Parwez are, quite frankly, obnoxious. Firstly, he argues that the standard translation of the Ayah (91:8), which is based on the plain meaning of the Arabic text, is incorrect. Yet Parwez’s alternative translation is based entirely on his preconceived materialist and naturalist notions. He has simply forced a meaning on to the Verse which is plainly not present. He apparently wasn’t bothered with such blatant intellectual dishonesty. Nor has Parwez articulated any linguistic argument in support of why he thinks the standard translation and understanding of the Ayah is incorrect and that his alternative translation is truly faithful to the text. If anything, Parwez’s justification for revising the translation of the Ayah is a textbook case of gross circular reasoning.
Parwez’s first rational argument against the orthodox conception based on this Ayah is that if the human soul has been inspired by Allah with a capacity to discriminate between good and evil then the entire institution of Nubuwwa (prophethood) is redundant. It is acknowledged that Allah raises up Prophets and Apostles for the purpose of guiding the people to the right path, but this does not negate the idea that the human soul has an innate sense of right and wrong. Prophets and Apostles are sent to remind people that they must follow their instinctive goodness and shun all forms of wickedness. Furthermore, Prophets and Apostles may bring a detailed divine law based on a divinely revealed Scripture, which contains a detailed ethical code, or to revive the neglected and distorted detailed moral laws of their preceding law-bearing Apostle. The human soul is only inspired to have a very basic ability to discriminate between right and wrong. For example, every human soul must necessarily know that murder is wrong, while expending effort to save a life is good. Orthodox Islam teaches that it is from the human fitra or “innate disposition” to believe in and worship the One God. The Prophet Muhammad صلوات الله وسلامه عليه said:


Apart from guiding their people to the right path, the function of Prophets and Apostles is to teach their people the proper way to worship their Lord and Maker, knowledge which is not part of the inspiration Allah gives to each human soul regarding basic morality.
Parwez’s second, though perhaps equally absurd, objection is that if the human soul has been inspired as to what is right and wrong, why are there such differing ethical codes and moral standards among the different human civilizations, and why do those ethics and morals evolve and change over time? Although not reflected in the English translation (Islam: A Challenge to Religion) of Parwez’s book, Islam Kia Hey? written in Urdu, the latter contains such a ridiculous example which is perhaps why it was not included in the English translation:
انسانی بچّہ جس قسم کے ماحول میں پرورش اور تربیت پاتا ہے اسی قسم کے خیالات و معتقدات لے کر پروان چڑھتا ہے۔ جینی بچّے کے نزدیک گوشت نہایت قابل نفرت شے ہے لیکن مسلمان بچّہ گوشت مزے لے لے کر کھاتا ہے۔
“The human child’s thoughts and beliefs depend on the environment in which he is brought up and raised in. Jain children are extremely contemptuous of meat, but a Muslim child delightfully devours meat.”
As has already preceded, the Prophet Muhammad صلوات الله وسلامه عليه explained that while every child is born with an innate disposition to discriminate between right and wrong, that disposition is corrupted by his parents, and by extention, the broader environment and society in which he is raised. However, the absurd example of eating or refraining from meat has nothing to do with basic human morality. It is more a matter of taste informed by one’s culture and household custom. The inspired morality of the human soul informs him about very basic matters of conduct, such as that murder, aggressive violence, theft, rape and false testimony are wrong. These are in fact universally recognized morals common to literally every human civilization and society.
at November 26, 2018