The contemporary Ibadiya swindle ordinary Muslims who encounter them by claiming they are not Kharijites or extremists and that they respect the Prophet’s companions and his ahl al-Bayt peace be upon them. I previously exposed the reality of the Ibadis from their own literature where they have audaciously defended the Kharijites who seceded from the camp of Amir ul-Mu’minin Ali b. Abi Talib [karram Allahu wajhahu] and declared him an unbeliever – God forbid! The Ibadiya insist they are not Kharijites but a moderate sect of Islam. Ali Yahya Mu’ammar, an Ibadi apologist, writes: “Judging by the sequence of events, it seems that these hadiths that talk about ‘secession’ [khuruj] were not known at the time of the earliest revolts; otherwise, how could it be that they were not being narrated and that they were not used with reference to the rebels at the time of the caliphates of Abu Bakr, Uthman and Ali? Or with reference to the apostates at the time of al-Siddiq? Why should they lie dormant, with neither the supporters nor the opponents of the caliphate, during four defiant revolts in which many Muslim heroes lost their lives, making use of them? This indicates strongly that such hadiths were not known at the time of these revolts, but were composed later in order to denigrate the people of Nahrawan and encourage ‘Ali to right and eradicate them without concern for their lives, and without second thoughts about killing them, without stopping to reason and consider whether they might have a just cause. ‘Ali was very severe on himself when he reckoned his deeds, giving lots of thought to his actions and weighing up the events that confronted him. There is evidence for this in Abu al-‘Abbas’s important book, al-Siyar, where he wrote: ‘Al-Ash’ath said: He struggled against the people, but every time they spoke to people they would turn them against us’. The Shi’a who surrounded ‘Ali were anxious, in their efforts to create their state, lest the people of Nahrawan should establish relations with the rest of the people and convince them with arguments and proof that the acceptance of arbitration had been a political mistake, that ‘Ali’s caliphacy [after the arbitration and his removal from office] was no longer valid, that the oath of allegiance to him was no longer binding, and that the real caliph was ‘Abd Allah b. Wahb al-Rasibi, who was given the oath of allegiance by a good number of Muslims. The Shi’a feared that those at Nahrawan would establish contact with the people, and it was for this reason that they wanted to eradicate their opinions, lest they be disseminated among people, who might then understand them and become convinced of their validity. It was only possible to eradicate these opinions by eradicating the people who held them. Had ‘Ali hesitated in this matter and avoided bloodshed, everything would have been lost. Thus, he had to be pushed to take this decisive and crucial step by any means possible. They were able to convince him through al-Ash’ath. He took the step, initiated the fight and eradicated the people of Nahrawan. But he was not able to eradicate the idea that they proclaimed, that idea which has filtered through with its truth and reality into the minds of many, until it became a principle that its upholders defend with patience, courage and resilience.” [Ibadism in History Volume I: The Emergence of the Ibadi School pp.24-25]: 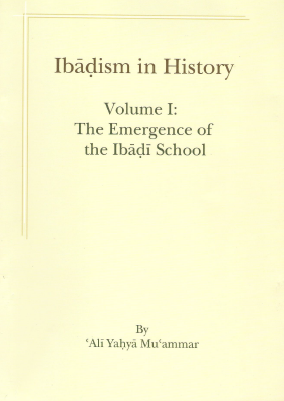 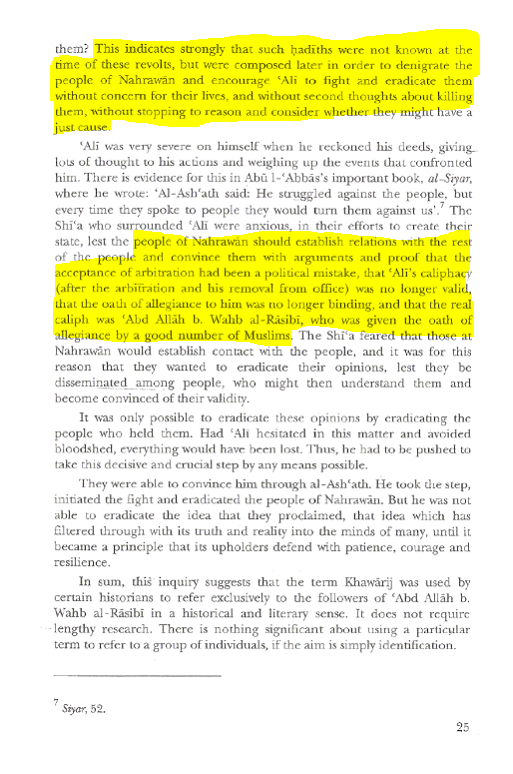