بسم الله الرحمن الرحيم
والصلاة والسلام على نبيه الامين
The twentieth century political fikr has done great harm to the cause of Tawhid. The preaching of Tawhid al-Uluhiya, which was the Tawhid preached by the Prophets and Apostles of Allah, and by great revivalists within the Umma, the likes of Ibn Abd al-Wahhab and Shah Isma’il of Delhi رحمة الله عليهما, was having an effect on the Muslim world. Educated and sincere Muslims were beginning to turn their backs on the shirk of grave worship and supplicating to the deceased. But then Mawdudi came along and introduced a new idea that the real shirk of our time is the shirk in Hakamiya. According to his twentieth century political fikr, greatly influenced by revolutionary Marxism, in order to establish Tawhid in the Earth, Believers must seize power from the various rulers and governments in the name of Allah’s absolute sovereignty. According to Mawdudi, this is the true effort of Tawhid and waging of war against shirk. The truth is, however, that Mawdudi’s redefining of Tawhid diverted and divided the original tendency of establishing Tawhid al-Uluhiya and combating the shirk of grave worship. In order to justify this, Mawdudi claimed:
اگر کوئی شخص اللہ کے حکم کی سند کے بغیر کسی کے حکم کو واجب الاطاعت سمجھتا ہے تو وہ ویسا ہی شرک کرتا ہے جیسا کہ ایک غیر اللہ سے دعا مانگنے والا شرک کرتا ہے۔
“If someone, without the chain of authorization from Allah, considers the order of someone else as an obligation to obey, then he is committing shirk just as someone commits shirk by supplicating to other than Allah.” [Quran Ki Char Bunyadi Istilahain p.36]: 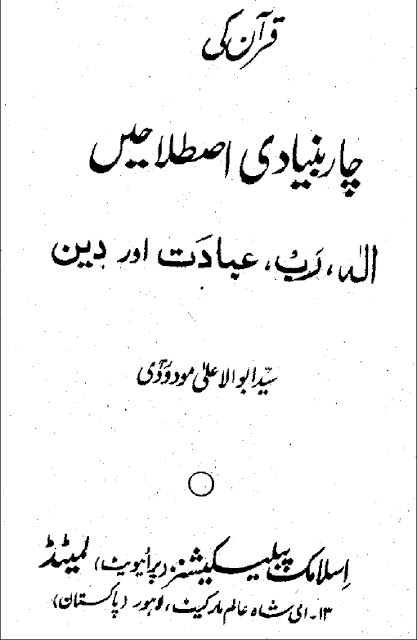 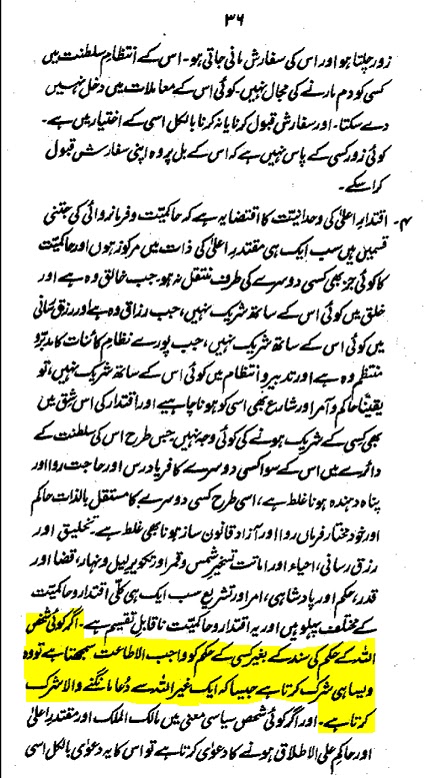 Of course, whether it is right or wrong to consider obedience to anyone without authorization from Allah obligatory, it is certainly not shirk on the same level as praying or supplicating to other than Allah. It should be clarified that absolute obedience is due only to Allah, and as the Prophet Muhammad [sall Allahu alayhi wasallam] said:


In other words, there is no unconditional or absolute obedience to anyone but Allah. However, to obey anyone besides Allah, including without authorization from Allah, and obedience to that which is disobedience to Allah, is not shirk. It may be sinful, but to declare it shirk, as Mawdudi has done, is false. As for considering obedience to anyone as necessary without authorization from Allah, this too is not shirk, though it may be wrong, especially if that obedience entails disobedience to Allah. Therefore, Islam enjoins children to be obedient to their parents, wives to obey their husbands, slaves to obey their masters, and subjects to obey their worldly rulers. This is in fact the fitra, or natural disposition. It is wrong to define worship as merely obedience to commands. Worship is much broader as I have explained previously.
at February 19, 2019