بسم الله الرحمن الرحيم
والصلاة والسلام على نبيه الامين
والعاقبة للمتقين
One of the great Islamic reformers of our time was the charismatic Allama Ahmad Sa’id Khan Chitrori (rahimahullah). He dedicated his life to preaching Tawhid al-Uluhiya, in a part of the Muslim world (the Punjab province of Pakistan), where shirk, grave worship and all manner of pagan superstitions are rife. The great Allama wrote a controversial book entitled Quran Muqaddas aur Bukhari Muhaddith in which he attempted to demonstrate how certain Hadith in the Sahih of Imam al-Bukhari (rahimahullah) are very much objectionable and contrary to the clear teachings of our most sacred scripture, the holy Qur’an. Although harsh language has been used in this text regarding certain narrators of Hadith, which the Allama should have been more cautious about using, I nevertheless agree with the spirit and tendency of this book. The aim is to reawaken within the world of Muslim scholarship an attachment to the holy Qur’an. The Ahl al-Hadith sect in particular overly emphasizes Hadith, especially the text of Sahih al-Bukhari, to the point of neglecting the Qur’an. I recently wrote an example of this being their position that the ma’mum should recite the Fatiha behind the imam even during the imam’s audible recitation of the Qur’an, despite the fact that the Qur’an itself clearly orders us to listen attentively and remain silent when the Qur’an is being recited. Unlike the Hadith-rejecters who call themselves “Qur’anists”, Allama Ahmad Sa’id Multani did not reject the Sunna and Hadith, rather, the name of his organization is Markazi Ishaate Tawhid wa-Sunna “Center for the Propagation of Monotheism and the Sunna”. However, it is true that certain narrations within the Sahih of Imam al-Bukhari, attributed to the Prophet Muhammad (sall Allahu alayhi wasallam) and some of his Sahaba (radi Allahu anhum), are objectionable and contrary to the holy Qur’an, such as the narration that a Jewish sorcerer, Lubaid b. A’sam, cast a magic spell on the Prophet, which actually effected his mind. The Qur’an, however, clearly states in two places:
إِذْ يَقُولُ الظَّالِمُونَ إِن تَتَّبِعُونَ إِلَّا رَجُلًا مَّسْحُورًا
When the wrongdoers say, “you follow not but a man affected by magic”
(Sura 17:47)
وَقَالَ الظَّالِمُونَ إِن تَتَّبِعُونَ إِلَّا رَجُلًا مَّسْحُورًا
And the wrongdoers say, “you follow not but a man affected by magic”
(Sura 25:8)

The methodology of the Ahl al-Hadith sect is to unquestionably accept all Hadith whose chains of narration meet the criteria of authenticity laid down by the muhaddithin (Hadith-scholars), no matter how objectionable or strange the content of such narrations may be. The truth is, however, that the science of Hadith verification, although a great achievement and legacy of our magnificent muhaddithin, is nevertheless a product of ijtihad – human calculations – which cannot be said to be entirely inerrant. I shall cite another example of how certain Hadith in the collection of Imam al-Bukhari are contrary to the sacred text of the holy Qur’an. Allah Most High says:
وَمَا خَلَقَ الذَّكَرَ وَالْأُنثَىٰ
And He Who created the male and the female
(Sura 92:3)

However, according to some narrations in the Sahih of Imam al-Bukhari, Abu ad-Darda (radi Allahu anhu) testified that he heard the Prophet (sall Allahu alayhi wasallam) recite this Ayah differently, without the words وَمَا خَلَقَ so that it reads:
وَالذَّكَرِ وَالأُنْثَى
And (by) the male and the female

Likewise, Alqama narrated that he heard this recitation from Ibn Mas’ud (radi Allahu anhu). Abu ad-Darda then went on to say:
وَهَؤُلاَءِ يُرِيدُونِي عَلَى أَنْ أَقْرَأَ ‏{‏وَمَا خَلَقَ الذَّكَرَ وَالأُنْثَى‏}‏ وَاللَّهِ لاَ أُتَابِعُهُمْ
“But these people want me to recite it – ‘And He Who created the male and the female’ – but by Allah, I will not follow them.” (Sahih al-Bukhari #4944)

Now this isn’t simply a matter of a variation in the pronounciation of the Qur’an, but a significant discrepency in the meaning. According to the standard recitation of the Qur’an which we have received through tawatur, and which is found in the earliest preserved manuscripts of our holy Scripture, the Verse reads “And (by) He Who created the male and the female”, hence it is the Person of Allah being sworn by, but in this Hadith of al-Bukhari, the meaning is changed an it becomes the male and the female that are sworn by directly “And (by) the male and the female”, without any mention of the Person of Allah. The Hadith is technically authentic going by its sanad, and it appears in other compilations of Hadith too. Therefore, according to the methodology of the Ahl al-Hadith sect, this Hadith must be fully accepted.

However, the methodology of the orthodox and mainstream Ahl as-Sunnati wal-Jama’a is to reject this Hadith, because it is manifestly contrary to the holy Qur’an. The holy Qur’an is given priority whenever there is a discrepency with the Hadith, because these narrations of Hadith are akhbar ahad (solitary reports), and logically cannot be taken if they oppose the text of the Qur’an which is mutawatir and under divine protection. Hence, Imam al-Qurtubi states regarding this Hadith that it is to be rejected for being contrary to the ijma (concensus) of the Muslim community with regard to their reading of the Qur’an. Furthermore, the mass transmitted reading of this Ayah through Hamza and Asim comes from Ibn Mas’ud himself, therefore it is not appropriate to accept such an isolated report against the concensus of the Umma. Therefore, even if the narration of Abi Darda has an acceptable isnad, it is contrary to the recitation of Abu Bakr, Umar, Uthman, Ali and the rest of the Sahaba – may Allah be pleased with them all. The ruling is to practice what has been narrated to us from the Jama’a, and to reject that which opposes it from singular, isolated reports:
قال أبو بكر : كل من هذين الحديثين مردود بخلاف الإجماع له ، وأن حمزة وعاصما يرويان عن عبد الله بن مسعود ما عليه جماعة المسلمين ، والبناء على سندين يوافقان الإجماع أولى من الأخذ بواحد يخالفه الإجماع والأمة ، وما يبنى على رواية واحد إذا حاذاه رواية جماعة تخالفه ، أخذ برواية الجماعة ، وأبطل نقل الواحد لما يجوز عليه من النسيان والإغفال . ولو صح الحديث عن أبي الدرداء وكان إسناده مقبولا معروفا ، ثم كان أبو بكر وعمر وعثمان وعلي وسائر الصحابة - رضي الله عنهم - يخالفونه ، لكان الحكم العمل بما روته الجماعة ، ورفض ما يحكيه الواحد المنفرد ، الذي يسرع إليه من النسيان ما لا يسرع إلى الجماعة ، وجميع أهل الملة
(Tafsir al-Qurtubi v.22 pp.321-322): 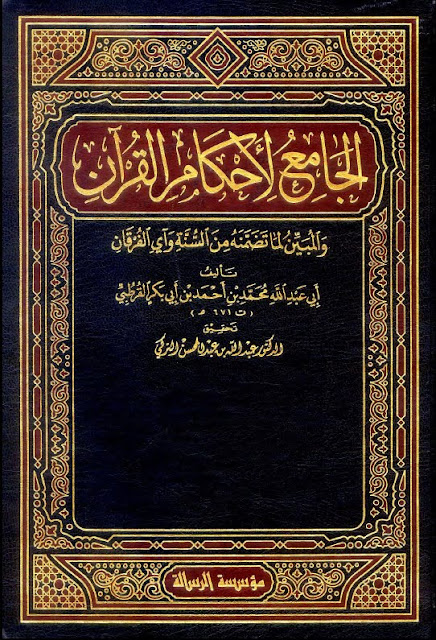 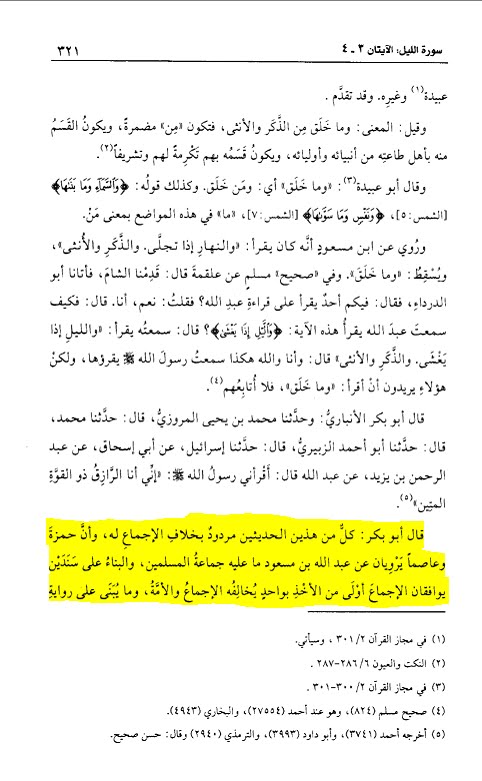 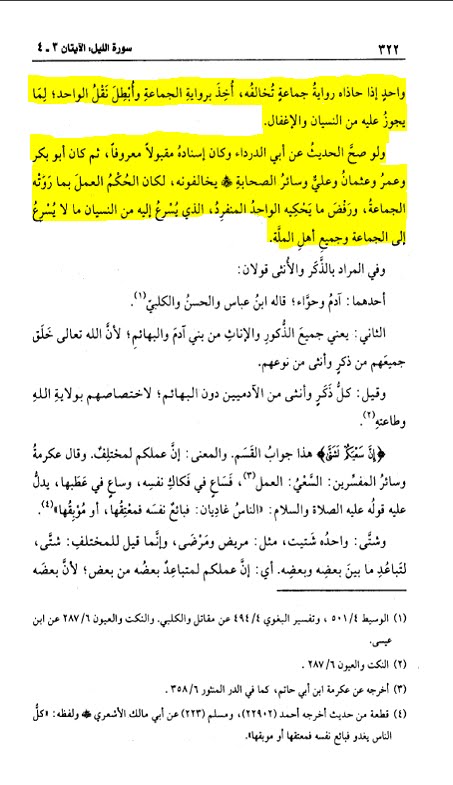